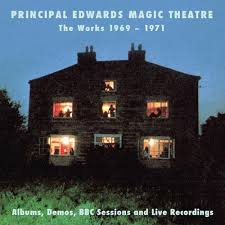 New anthology bringing together the two albums Principal Edwards Magic Theatre released in 1969 and 1971, plus a separate disc with BBC Top Gear sessions, a live performance from a gig at the Hampstead Theatre and assorted demos and single tracks. Ian Canty thinks it is time to look afresh at one of the first “multi-media” outfits.

On the face of it, Principal Edwards Magic Theatre were a large ensemble (counting 14 members on the sleeve of their debut LP, though not all them contributed to the sounds) that seemed like the ultimate expression of the Hippy dream – poets, dancers, actors, light show operators and finally musicians all having a free for all in the name of art. Though prone to a certain amount of a raggedness, they were a far more focussed proposition than the Freak Out recordings which may have given them their initial inspiration.

Coming together in 1968 as a meeting of like-minds at Exeter University, they debuted in a gig at Portsmouth Guildhall which set the ball rolling. They did definitely capture the zeitgeist of the times, possibly more so than many better known bands, using the space provided by Psychedelia to bring to life their singular musical vision. A vision that far from being a mere period piece, now somewhat improbably seems a potent of the future. While they may not have influenced Post-Punk goings-on almost ten years down the line, at times, they appeared to pre-empted them.

This quirky approach quickly gained them favour with BBC Radio One DJ John Peel (and somewhat less trendily though it probably didn’t appear that way at the time, Bob Harris too) and they duly signed to his Dandelion record label.

Their first LP, 1969’s Soundtrack, could have fallen into the now trendy Acid Folk tag but for a couple of things: though many tracks commence with what might seem typically Folky intros, Principal Edwards seldom could pass the minute mark on a song without wild changes in pace or style, skipping through genres in a matter of seconds. Also the longer pieces were usually peopled by many different characters doing odd things, presumably to be acted out by the non-musician band members at live shows, which meant the material was very “story” based. When they veered off the Folk Rock path they created a sound that was midway between Jefferson Airplane, the Mekons and the Raincoats (from a modern perspective). In fact parts of this and the next record wouldn’t have looked out of place in the Rough Trade Catalogue 78 to 82.

It is on Soundtrack where the visual aspect of the band is most catered for, with songs like the spellbinding The Death Of Don Quixote and Pinky: A Mystery Circle giving ample opportunities for dramatic interpretation. A tad in the mode of Kurt Weill’s Alabama Song, Sacrifice gleefully hops through early Pink Floyd Psych Rock, Acapella, gentle Folk Pop and French Chanson during its seven minute running time. They did like to pack a lot of invention into their work and their restless adventure ties them in more with experimental Post Punk bands like the 49 Americans and the Door and the Window than their ’60s contemporaries. Their first single Ballad Of The Big Girl (And Now The Mere Boy)/Lament For The Earth is appended to this disc and whilst the nominal A side Ballad is a pleasant piece of Folk Pop with some breath-taking female vocals, the flip with its sparsely accompanied, plaintive voice hints a little at what Mazzy Star were to do years down the line.

It was two years before a follow-up album emerged in the form of The Asmoto Running Band, the title was based on a plea from an exasperated roadie for a “smoother running band”! In a way he got his wish because the epic “story” songs are gone and they honed their approach a little further away from freaky Folk to freaky Rock (which was well in style at that point in time). Guitarist Root Cartwright was always the driving force behind the band and here he really comes to the fore with some excellent proto-Tom Verlaine work, most notably on McAlpine Versus The Asmoto (there’s even a hint of C86 jangle pop here, Principal Edwards were surely ahead of their time!). A jokey tribute to their adopted hometown The Kettering Song provides one of the highpoints of this set, using a near-MOR hook-line, backwards sections and almost Punky vocals to produce the oddest piece of local pride.

To underline the more professional attitude, this album was produced by Nick Mason of Pink Floyd (who obviously didn’t mind taking a mad bunch into the studio, as he did with the five piece Damned a few years down the line) and on here the band reminds me most of the 80s incarnation of the Mekons, with a prominent fiddle, Country/Folk influences and a one-two punch of dry male/soaring female vocals. Though the first part of the album seems to follow “concepts” (but keeping things generally concise in contrast to their previous LP), the latter part has some great “odd-Pop” in the aforementioned Kettering Song, Freef (R) All and the off-key groove of Autumn Lady Dancing Song. It all finishes with a typical piece of Principal Edwards catchy strangeness Weirdsong Of Breaking Through At Last.

The odds and sods disc which curtails this collections has some rough gems on it and is a worthwhile addition to the set. Starting with an “off air” recording of three numbers from an edition of Top Gear in 1969, what they lack in audio finesse these tracks make up for with their evocative pull. At one point John Peel dedicates Pinky: A Mystery Circle to his Mum who he saw going through Portobello under clouds of incense clutching the new Family album! Though the tracks here don’t wildly deviate from the LP versions, you still get the requisite thrill of eavesdropping on a genuine ’60s moment. The audio fidelity of the songs from the show a year later on is much improved, resulting in clear representation of two great previously unreleased tracks in King Of The… and The Fortieth Day Of Winter.

A strong live performance from the Hampstead Theatre of last line up of PEMT (before their afterlife under the truncated name of Principal Edwards) follows. Again there are a lot of unissued tracks which would have made up the bulk of a possible third album. Weasel In The Wardrobe, recalls Soundtrack in its esoteric whirl and the dream-like Scarlet Halfman show a lot of promise that was unfortunately extinguished before being set down in a studio. Three demos end this selection and they provide tantalising glimpses of a future not pursued being an attempt in Root Cartwright’s words “to come up with a commercial single”. In reality they did just that by cooking up two winners in Rainy Day Anne and Dear John & Mary (A State Of Affairs), but in the end sadly neither saw the light of day.

It would have made a great hit single – Rainy Day Anne commences with a quirky “music box” style opening (which made me think of the classic Ghost Story For Christmas, Lost Hearts) and then becomes a lovely bit of Folk Pop with a hint of New Wave (but years before that happened). Dear John (the projected flipside) reminds me most of all of the kind of Jazzy Post-Punk stuff that was all the vogue ten years on from this recording. The last song of the entire set Ministry Of Madness is again the kind of Country Hoe-down the Mekons excelled in during their pre-Blast First days. I wonder if this song is where the Doctors Of Madness got their name from?

All this has been pulled together in fine style by Cherry Red, with excellent liner notes by Mike Barnes including observations from Root Cartwright himself. It is easy to write Principal Edwards Magic Theatre off as a “bunch of hippies” but in reality they are ripe for re-evaluation as a great, chaotic precursor of what was to come in the late ’70s British music scene. The Works 1969-971 was for me simultaneously a shock, a revelation and a joy.