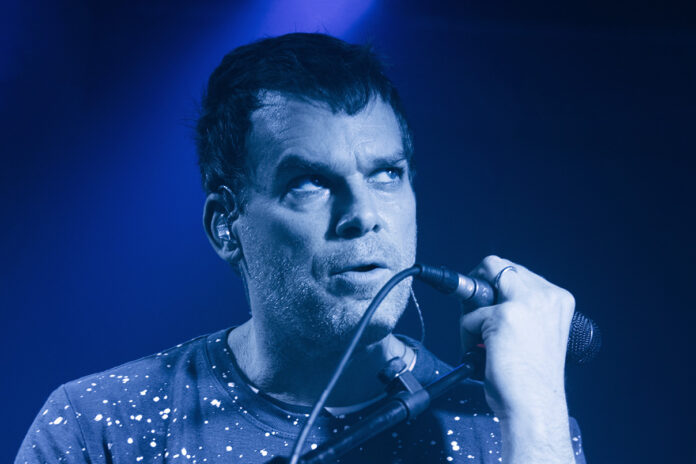 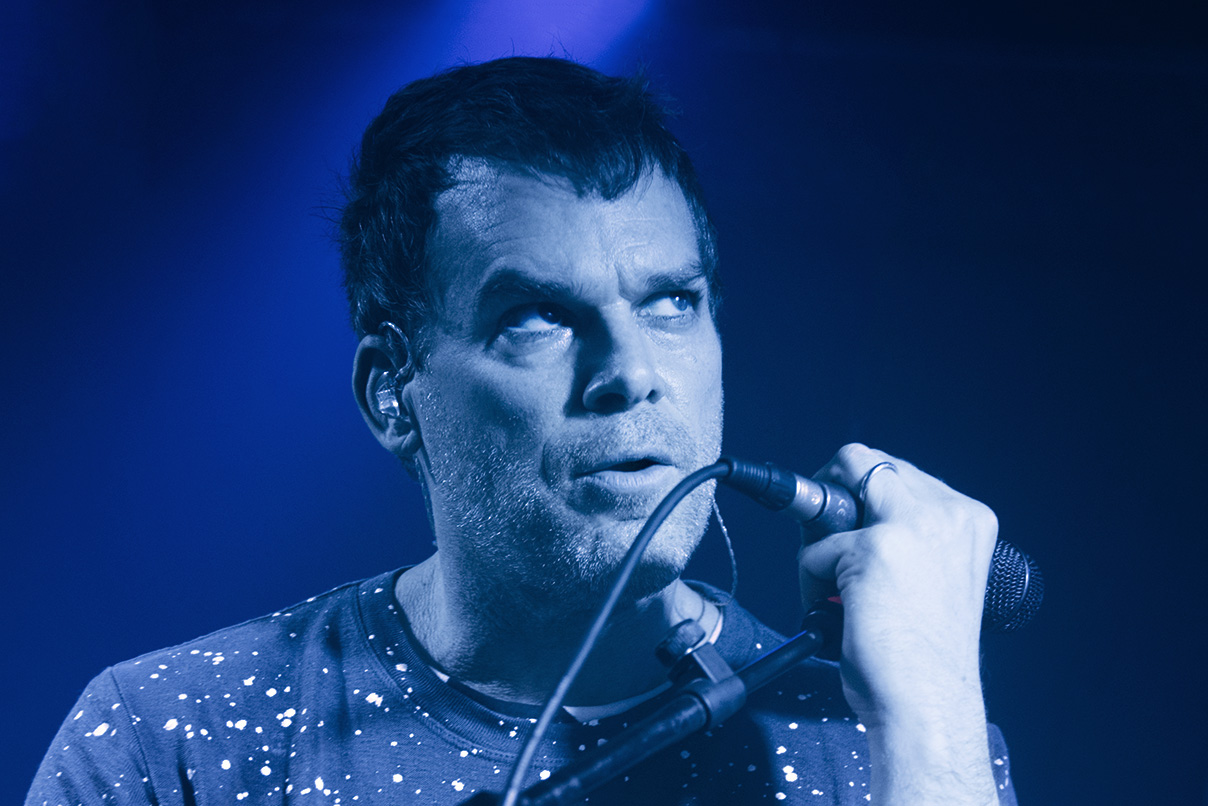 The wild weather didn’t stop fans from turning out to witness, New York trio, Princess Goes To The Butterfly Museum, featuring Dexter star Michael C. Hall.  They wowed the tightly-packed, mask-wearing audience members with a breath-taking performance in the most intimate of venues.

Before the main act, we were treated to Beija Flo who began her performance announcing that it had been an absolute joy to join Princess Goes To The Butterfly Museum on their short tour. She was quirky, very funny and obviously a very talented singer-songwriter. She revealed her excellent voice, with a brilliant range, from deep sultry tones and gorgeous falsetto, enhanced with gentle vibrato to the odd wild frenzied scream. The heavy and wild Head Or Tails was just amazing, laced with strong, brilliant yet sometimes intentionally frantic vocals. 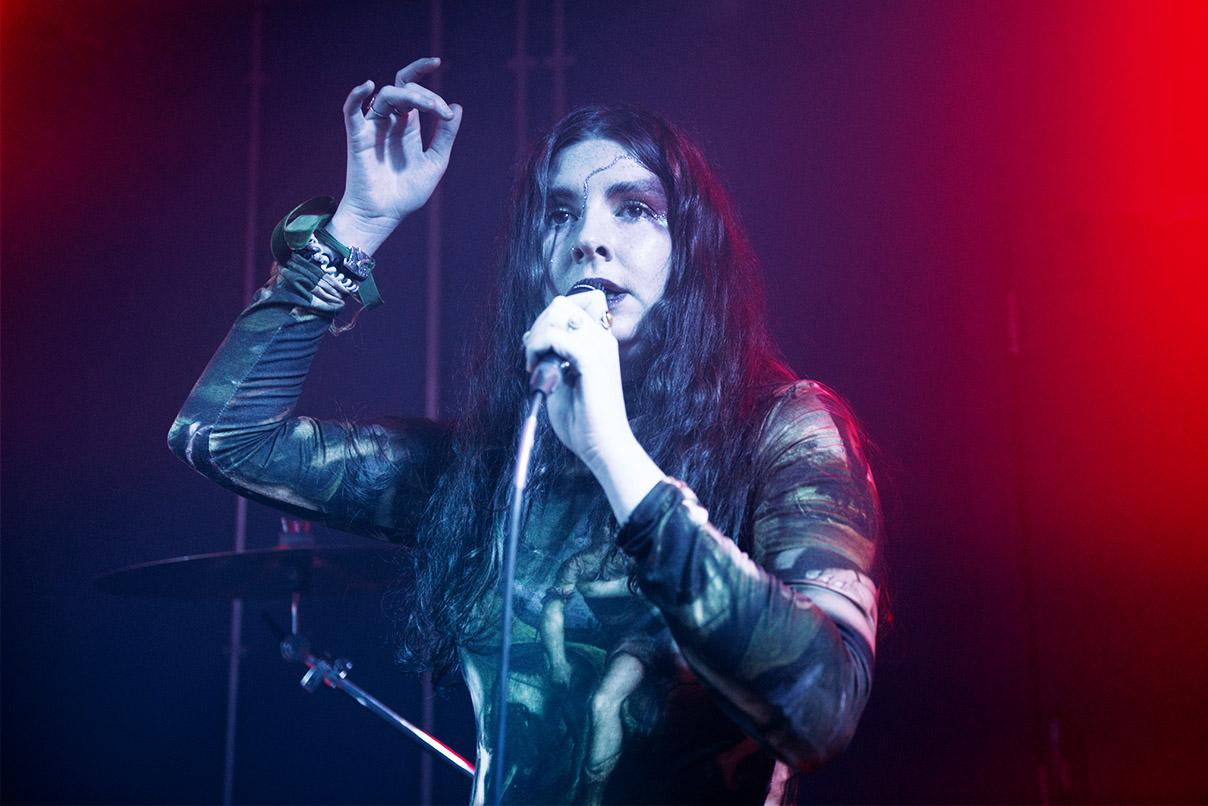 All of her songs, including Mary and Nudes, made for very thrilling music indeed. Beija Flo did show a little frustration that she felt some people were talking and should really be listening, so commented to the audience. Good on her, she so rightly demanded a little respect for her brilliant, unique music. She teased the audience, saying it was the last night, so she’d gone all out renaissance and her arse looked so good. Performance art was woven throughout all her fabulous, interesting songs, that were openly influenced by some challenging personal experiences. Beija Flo was down to earth and is proud to live in Liverpool, her talent, confidence and dry humour shone through. She is definitely worth checking out. 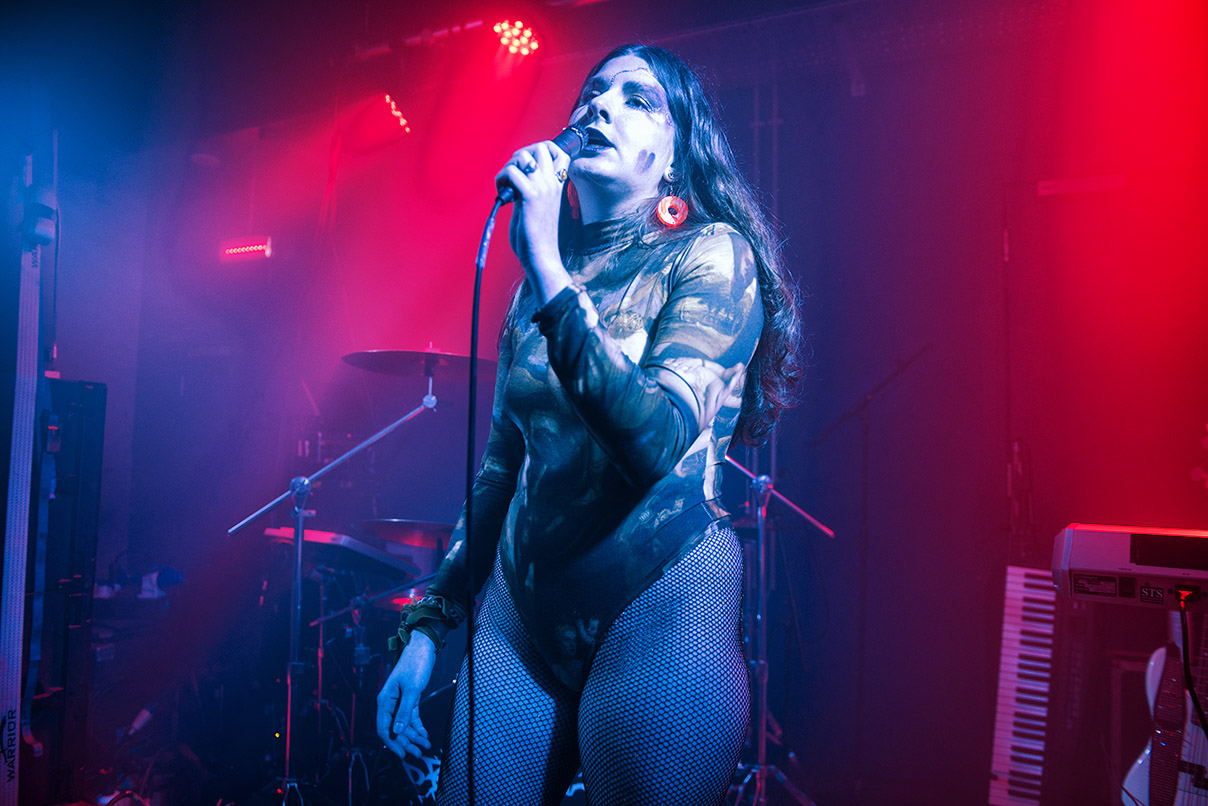 Princess Goes To The Butterfly Museum had to squeeze onto the tiny stage, but this didn’t seem to faze them at all. During the ambient intro to their first song, Offering, Michael appeared to be limbering up for his performance, then he took to the mic and his breath-taking, faultless vocals just soared across the room. The music was exciting, with an electronic dance feel, definitely not written in mainstream song format. A variety of influences could be picked out, ranging from electro, metal, dance, new wave and ’70s / ’80s disco. There were definite goose-bump inducing dark goth-rock moments. It was mesmerising, the incredible sounds pumping out and seemingly pulsating through the audience’s member’s bodies like an electrical charge. 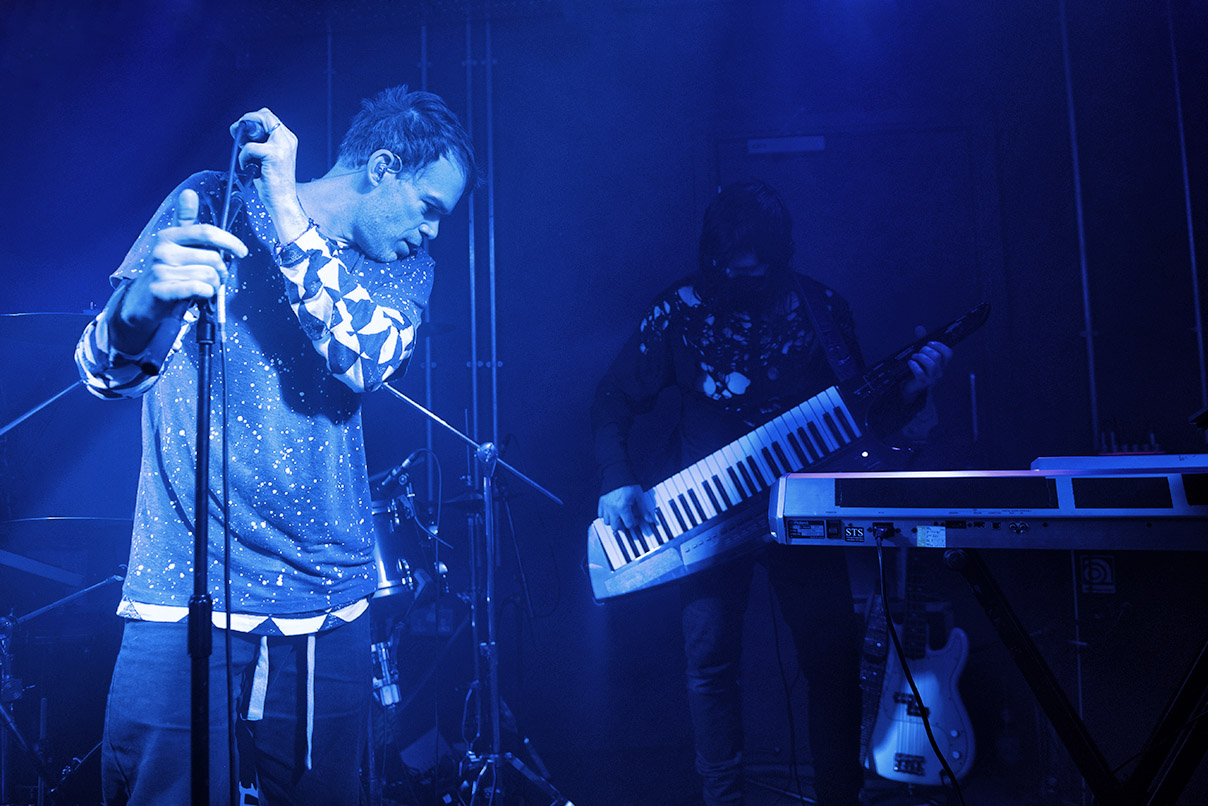 The acoustic drums, synths and bass guitar all sounded incredible and so tight. Although stripped down and minimalistic, they still absolutely rocked the room. The band are playing exactly what they choose and feel, going with their combined talented flow and certainly not conforming to the three-minute radio-friendly song format.

There was a fascinating, theatrical performance art element to their show and it was also apparent there was a special chemistry between the three band members. You could sense they actually felt liberated, not only by the brilliant music they’re making together but the freshness of this experimental journey and playing such small intimate venues. They are all well-known musicians/ performers in their own right but have come together in this musical venture and the passion shines through, it makes a recipe for success for this exciting, unique journey. 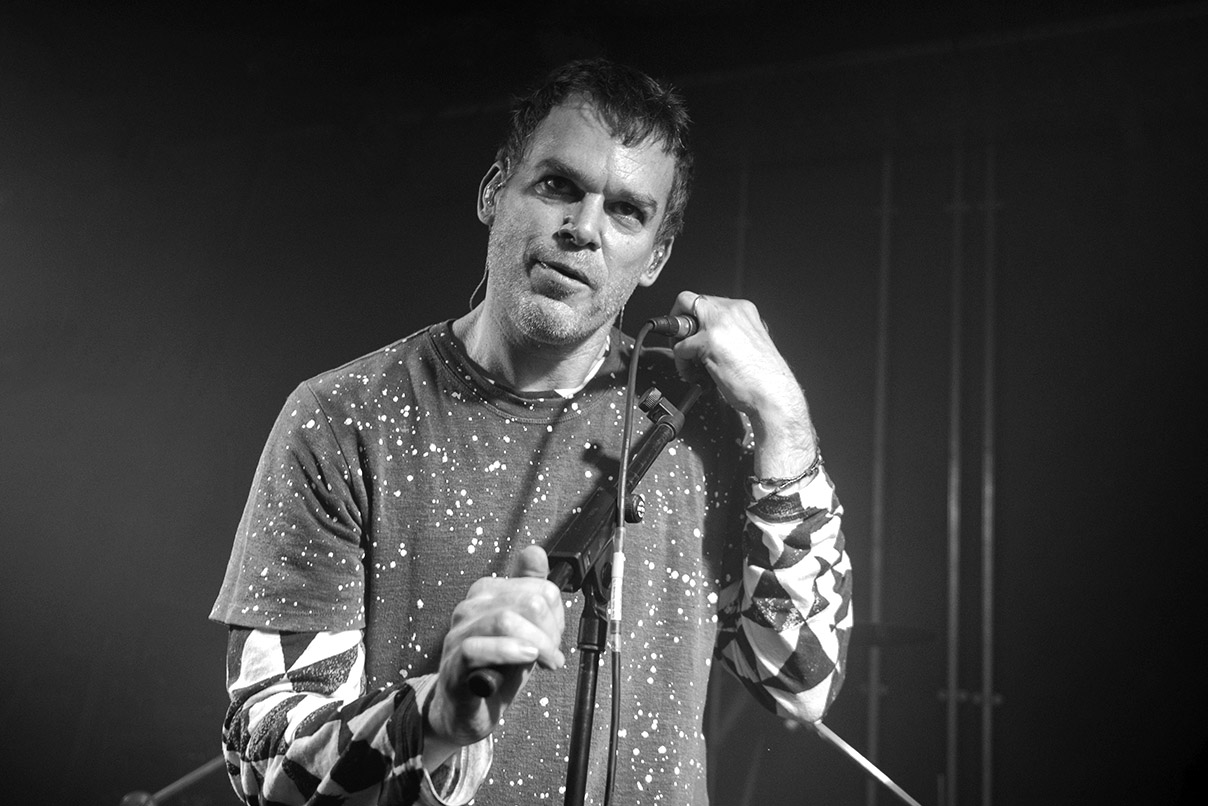 The only disappointing thing about this gig was that a significant amount of the audience had attended purely because of his fame as the captivating, dark serial killer Dexter. Michael was unfazed by the constant screams, some that included “I love you”, “kill me”, “ come and live with me” and some eyes rolled at that age-old mating cry of “ get ya kit off”. Micheal was so modest and down to earth with it all, just took it in his stride and responded politely, but without encouraging more. He just wanted to perform the music they’ve crafted together. Their fan base will no doubt rapidly increase and hopefully, the audience members who are there for the fantastic music will not tolerate any distractions from the Dexter fans. At this intimate gig, there were quite a few shouts from the true music fans to “stop talking” or “shut the fuck up, we’re trying to listen”. Yes ok, he’s Dexter! – can’t blame people for feeling a little awe-inspired by that, but their music needs to be taken seriously. 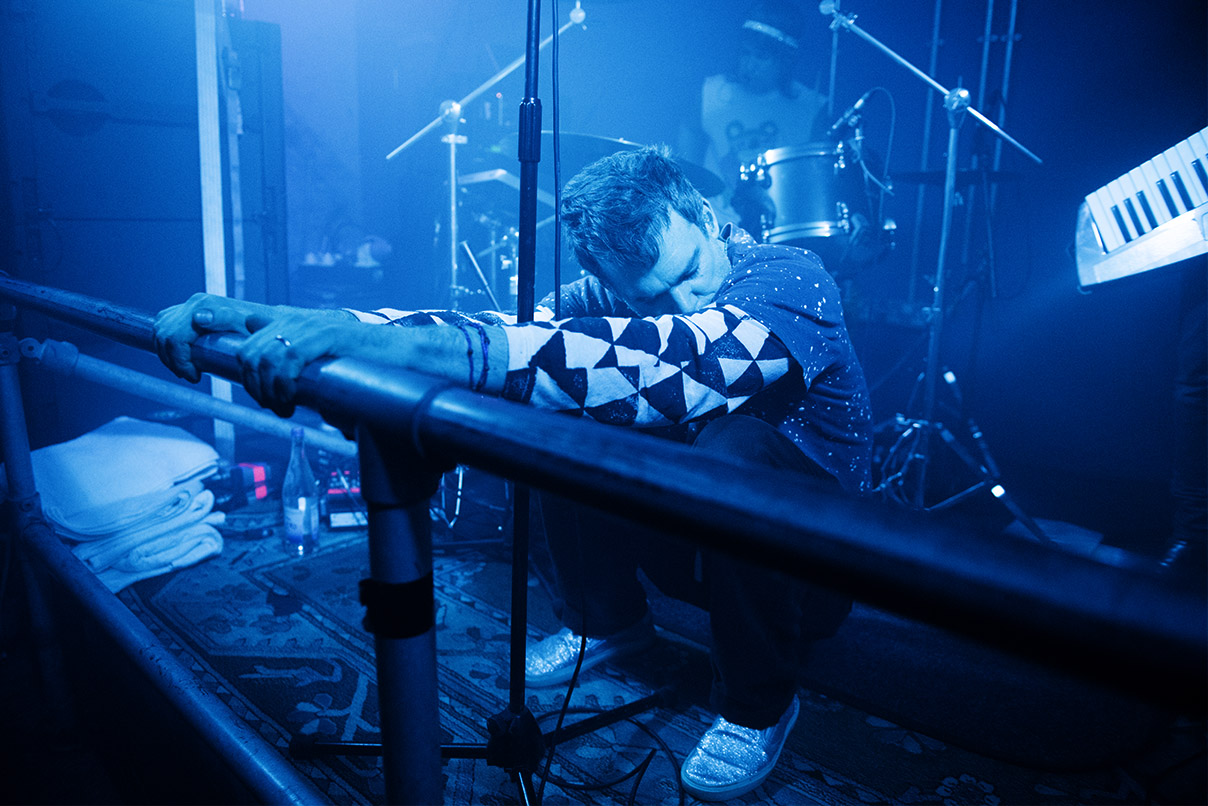 Songs in the set included the brilliant Vicious, The Deeper Down, Airhead, Angela Peacock, Eat An Eraser, and Sideways. Although the music is certainly unique and bears little resemblance to Radiohead some of Michael’s beautiful swirling, falsetto tones did have a definite Thom Yorke feel to them particularly in Love American Style. The single from the album Nevertheless was a brilliant track, that included some wild and frenzied vocals.

Michael glanced up at the huge, disproportionate mirror ball on the ceiling, in this tiny venue (it was rather amusing) then he made a bemused observation and just quipped with a deadpan expression “prominent” – a funny little moment. 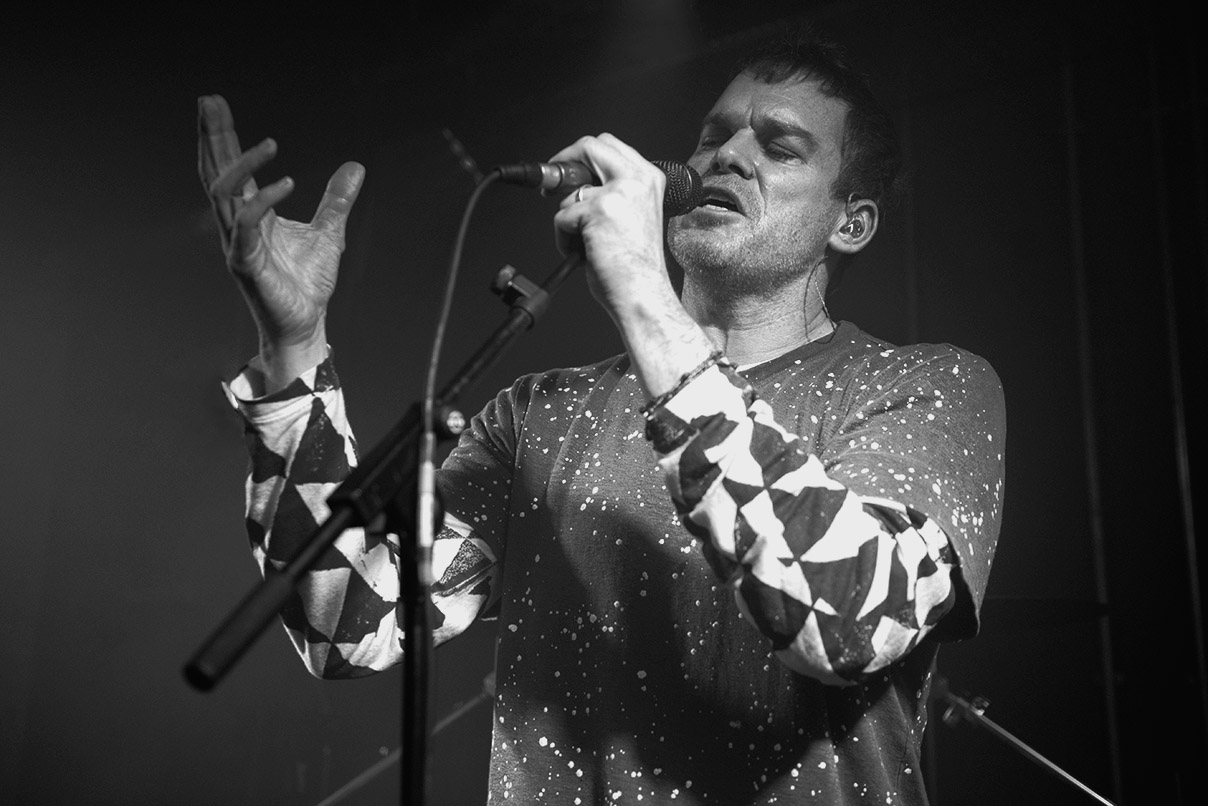 Princess Goes To The Butterfly Museum continued their flawless performance, with awesome tracks such as Tomorrow’s Screams and Jet Pack. They finished with the title track for their album ‘Thanks For Coming’ and that was also just what Michael said to the audience. Of course, there were shouts and requests for an encore, but due to the nature of the venue and stage the band shelved the usual ritual of going off stage and returning for the encore.

After having experienced Michael C. Halls brilliant performance in Lazarus, at a London pop-up theatre experience, it was a treat to hear his own music and it certainly lived up to expectations. This was an incredible performance and if you haven’t seen the band live yet it is highly recommended, perhaps we will see them packing out bigger venues next year.