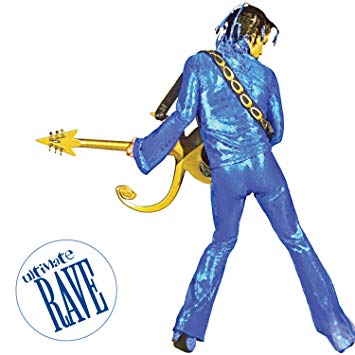 His Purpleness’ legacy begins to grow.

When Prince sadly departed this world in what was seemingly the great cull of 2017, he left a vacuum that will never be filled. Taking his place with David Bowie, Leonard Cohen and Glenn Frey who also departed the third rock from the sun, Prince was unique…completely and utterly.

A multi-instrumentalist, vivacious and soulful vocalist, and master conductor; Prince sold over 100 million albums in his 57 years on Earth, releasing 39 studio albums and countless singles. Now that the infamous vault has been unlocked, there will undoubtedly be a stream of releases from the keepers of the keys to the vault. Amongst the never before heard material that has crept out, there has been a program of re-releases offered up.

Ultimate Rave brings together Prince’s late 90’s return to mainstream label releases with Rave Un2 The Joy Fantastic and Rave In2 The Joy Fantastic (a collection of remixes of the original album). Contained on the album are a glut of poppier cuts that showed how Prince liked to move with the times. He embraced pop, and hip hop without sacrificing his true funk outlook. The production is, as to be expected, sublime.

The opening trio of tracks take in soul, hip hop, rap and funk and features Public Enemy’s Chuck D on Undisputed. The Greatest Romance Ever Sold was one of the bigger ‘hits’ from the album.

Prince’s masterful cover of Sheryl Crow’s Everyday Is A Winding Road is a highlight of the whole album. The reworking is a joyful rendition that has P-Funk style basslines in its latter strains as well as gospel-style vocals; it is arguably one of the best songs on the album.

Man O War and The Sun, The Moon & The Stars are downtempo soul numbers that ooze with a smoothness that Prince brought to all his ballads. Baby Knows is a sassy number that could have hung on some of the Prince’s later 80’s albums. It’s short and sweet and has a real rock and roll feel to it with Prince picking up the guitar for a few licks which are few and far between on the album; perhaps this is a testament to the stylings of the time. It also features Sheryl Crow. Another guitar based number is So Far, So Pleased which features Gwen Stefani. There is quite an array of styles in the special guests on the album.

Prettyman closes out the album with the NPG getting their horns up in a style that was very unique to this group of musicians.

The remix CD of this release is largely forgettable, however, the whole package is great and it’s a product that has been lovingly put together. The DVD disc is truly sublime though. The setlist is absolute dynamite and contains plenty of collaborations with Maceo Parker, Rosie Gaines, The Time, Lenny Kravitz (who duets on a badass version of American Woman), George Clinton and Larry Graham. This is how Prince partied in 1999. Decked out in a shiny blue outfit, watching Prince orchestrate the band whilst throwing in all the passion one could give, is a delight to see and heightens the sadness within that this genial musician is no longer with us. All the hits are here. He plays on his back, he plays on his knees, he plays bass, he plays piano, he plays guitar and he sings. There are too many highlights to mention. It also features some music from Prince’s 1993 album, The Undertaker. The only downside of this aspect of the release is that there is no Blu-Ray variant.

In the pantheon of Prince’s output this album isn’t an essential addition but has some real high points and saw Prince getting himself back on people’s radars. Rainbow Children followed this album, and the excellent One Nite Alone live boxed set. These releases paved the way for the Grammy-winning Musicology, 3121 and free cover mount album, Planet Earth. These records culminated in Prince headlining the o2 in London for 21 nights straight. Over the course of these releases and shows, Prince was firmly back on the aforementioned radars of not just people, but the mainstream media. All of these albums contain some solid deep cuts that if people give the time to, will start staking claims for favourite Prince compositions (see Musicology, 3121, Get On The Boat, Guitar, Chelsea Rogers, Fury).

In the wake of Prince’s death, it is truly saddening that we won’t get any ‘new’ material from Prince, but the slew of reissues and no doubt lost recordings will hopefully serve as a fitting legacy providing they’re dealt with correctly and not thrown out for shameless cash in.