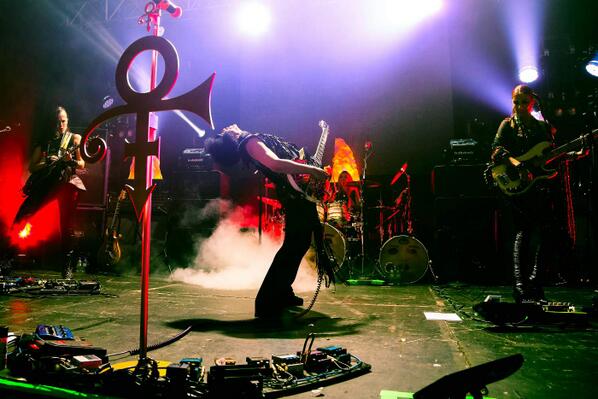 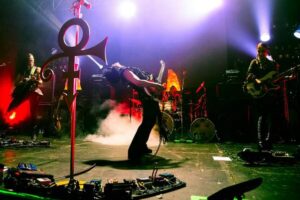 Legendary performer Prince, along with his new band, 3RDEYEGIRL took to the stage in Manchester for the first time in over a decade on Friday night. What followed was nothing short of spectacular. Dom Walsh reports for Louder Than War.

Prince has been knocking around our nation’s capital for several weeks, doing smaller and more intimate gigs that worked on a first come first served basis. Having wowed the crowds at some of London’s iconic venues, the Prince juggernaut announced that there would be two gigs in Manchester.

Initially, the venue was not announced, but when tickets went on sale on Wednesday evening, as Prince and 3RDEYEGIRL were presenting a Brit Award, it was announced that the band would be taking the stage at Manchester Academy. Even though the capacity of Manchester’s Academy is over 2500, this was intimate; especially when you evaluate the size (not literally) of the star performing.

In a change of tact, tickets were made available before the gig, at a princely £77. If you were lucky you could buy 4 tickets for either Friday or Saturday. Unfortunately, this played into the touts hands and within a very short space of time, tickets were being touted on such hideous websites as Seatwave and Stubhub for vastly inflated prices. Personally, I was extremely disappointed as I had missed out on a ticket. I consider myself a big Prince fan and felt a massive amount of vitriol towards those people who had grabbed tickets to sell on. Around 24 hours later, it was announced that you would need ID with your ticket to gain entry, which was a good move to combat those touts.

As tickets were sold out almost immediately, there were some tickets on the door. I luckily grabbed one of these tickets at the last minute and entered the venue having missed the first three tracks of the set. I considered myself lucky that I would be able to see one of my musical heroes. In addition to that, I would be seeing 3RDEYEGIRL; who from various videos on the net had shown themselves to be an astute band in their own right.

Prince was mid flow on She’s Always In My Hair, claiming ‘she’s always in little Prince’s curly hair;’ a suitable segue into a comment on Prince’s Hendrix-esque current look! The Purple One looked every inch the rock god, flanked by the dazzling 3RDEYEGIRL. A superb slower version of I Could Never Take The Place of Your Man followed before the bombast of the seemingly U2 sampling (I Will Follow) Guitar. New cut, Plectrum Electrum, led into a fine cover of Billy Cobham’s Stratus (the main sample for Massive Attack’s Safe From Harm).

The opening three quarters of an hour of the show were simply stunning. Prince was in electric form on the guitar, and 3RDEYEGIRL showed that they could hang with the best of them by not only backing Prince, but taking the lead on more than one occasion on the guitar, bass or drum.

Following the spell binding opening, Prince took to his piano and ploughed through a mound of hits which were consigned in part to samples; the crowd did not care as When Doves Cry, The Most Beautiful Girl In The World and Sign O The Times were all aired. Prince picked up the four string for a full version of Forever In My Life, and returned to the piano for A Love Bizarre. To complete the bands main set, Purple Rain sounded as magnificent as ever, even with Prince staying behind the keys. His signature solo did not materialise however the band settled into a groove that allowed the crowd to sing along in unison.

The first of four encores began with a low down and dirty version of Lets Go Crazy which broke down into Edgar Winter’s Frankenstein half way through. If any song signifies the current state of Prince & 3RDEYEGIRL’s intentions, it is this version of this song. It is glorious. The camaraderie between the musicians and the groove are irresistible. In my many years visiting Manchester Academy, the sound has never been louder, and I’ve seen some remarkably heavy bands in there over the years!

U Got The Look followed to a somewhat muted response even though the track has never sounded better. In stark contrast, Wild Cherry’s Play That Funky Music tore the roof off the Academy. With Love Rollercoaster’s funky guitar hook neatly sampled in the middle of Play That Funky Music, the first encore ended. The band returned with a run through the rarely aired The Love We Make from 1996’s Emancipation. The lesser Prince fan may not have recognized the track however the band remedied this with Take Me With U, before an utterly funky run through Musicology. Ida Neilsen’s bass was tight as a nut and Prince’s vocal was flawless.

Another encore ensued which saw Prince blaze his way through The Clash’s Train in Vain and Crimson and Clover. The pulsing beat of Hannah Ford’s drums sounded superb during Cause and Effect before Donna Grantis and Prince shared soloing duties to shame even the most accomplished lead guitarist. A final return to the stage saw the band play Bambi from Prince’s self titled 1979 effort. Again, the track was guitar heavy with soaring solos and super tight grooves.

The band exited to current single Pretzbodylogic over the PA. The crowd lingered with hopes of a second show. It transpired that the second show was aborted and people were allowed in for £35 when the encore began. These turn of events left a sour taste in some people’s mouths, which was understandable. That being said, Prince and 3RDEYEGIRL were in scintillating form. The band were incredible and a joy to watch. Prince has a back catalogue that ranks with the very best and anyone that doubts his prowess on guitar need only see this incarnation of the Purple One’s many incarnations from over the years.

The £77 ticket price was not a shock. There are lesser, and quite frankly worse bands, charging more than that in the current climate. Yes it’s a lot, but when you are exposed to a man and a band in such intimate surroundings that possess this much talent, you definitely do not feel short changed. For all the running around, ill fated second shows and uncertainty, for the two and a half hours in the company of Prince and 3RDEYEGIRL was magnificent.

All words by Dom Walsh. Read more from him by checking his Louder Than War author profile.