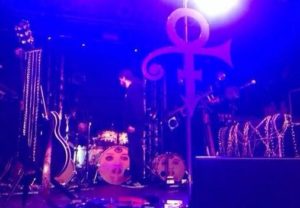 So last night Prince played an impromptu gig / open sound check at the Electric Ballroom and I was – sort of, eventually – there. Wild rumours had started to spread on Twitter late Tuesday night that this was really happening, but no-one quite believed it.

As it happens, when in London I live opposite the Electric Ballroom. So I stood at the window and watched the queue forming in the torrential rain, and then saw that the doors were open, and those on the guest list, but not the rain-sodden fans, were being let in. Some media person inside, over excited by her own privilege, tweeted that only 75 were inside as Prince kicked off his mini set, while 2000 were queueing outside. Actually there were maybe 200, 300 max in the queue; it was midnight, it was raining, there was a tube strike, and most people weren’t, I guess, up for taking a chance that the rumours were true. Eventually, almost begrudgingly, they let the ordinary folk in, a couple of songs from the end. And after even more prevarication, I thought what the hell, pulled on my boots, and walked straight across the road and into the venue.

Prince was on stage. He was bigger than I expected! He had a messy Afro, and looked pretty knackered but contrary to what some music biz cynics had been saying on Twitter – “it’s just going to be a glorified jam isn’t it” – the music sounded great. Thinking about it now, maybe some tapes were involved, as he only had a three piece, all female band, 3RDEYEGIRL, but it was brilliantly funky, with Hendrix-y guitar playing from the mini-man himself, and the mini-crowd dancing and singing along.

I can’t claim to be a Prince afficionado – I respect rather than love his work, (or at least I do when he’s not dressing up of his band in dodgy suspenders and corsets; the only band member I got a proper look at seemed to have an early Ian Astbury haircut, and ‘proper’ clothes, so maybe, hopefully, he’s moved on. Perhaps he moved on a long time ago; I haven’t been following… ) So, I don’t know the name of the one, extended track I did get to see / hear, but it involved chanting “Love One Another” a lot, and, like I said, some great guitar. In truth the ‘love one another’ stuff reminded me a bit of when I saw Curtis Mayfield many, many years ago at Uni, and he covered “All Night Long” and the crowd was having a great time, but somewhere in the back of our minds we were thinking, “but this is Lionel Richie”. By which I mean, that kind of thing works live but maybe it’s not the sort of thing the more jaded and cynical amongst us would listen to at home. But then he – Prince – rescued it with that guitar genius and it got noisier and heavier and I loved it.

Apparently his set was around an hour long, and was mostly the new album, but also included a cover of Play That Funky Music, which I bet was damn good. They only let the real fans – and me – inside for the last couple of songs, which seems a bit mean. I was approached by 6 Music for a vox pop at the end, with the words “Are you a normal person?” No, I’m a politician! Apparently that counted as normal, as in, not a music biz blagger, and so I told them he’d been great.

Prince came back onstage at the end, wearing big round shades, and promised that he’d be back tomorrow, “earlier and for longer”, and I left as the real fans were desperately trying to buy or blag tickets for that, before their long and wet walk home.