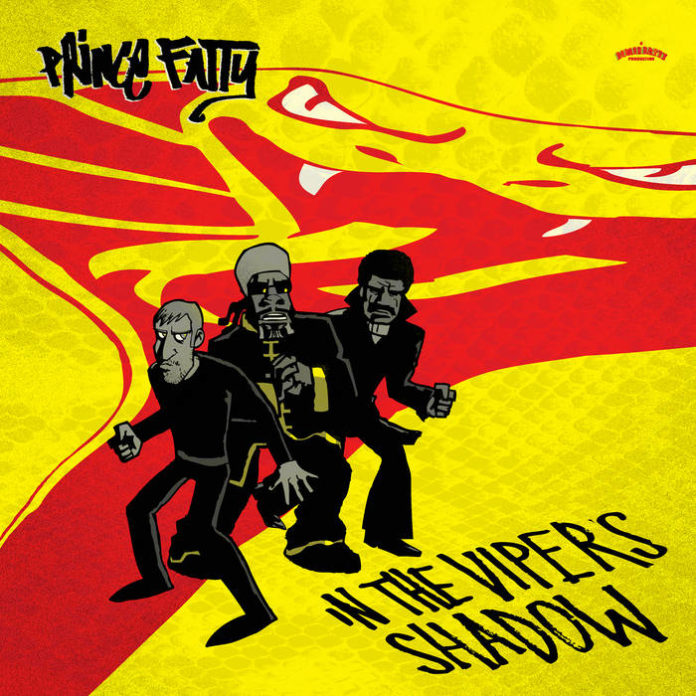 Prince Fatty – In The Viper’s Shadow 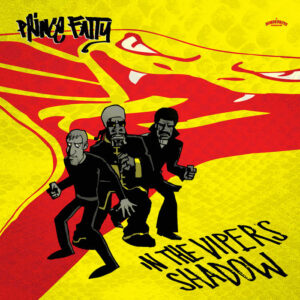 Bringing together a bunch of bona fide reggae music legends including Big Youth, Marcia Griffiths and Cornell Campbell, Prince Fatty’s new album aims to resurrect the classic sounds of Jamaica in the 21st century…….LTW’s Ian Canty sees if the fat one manages to hit the screaming target …..

Through many collaborations over the past 15 or so years Prince Fatty (born Michael Pelanconi) has shown a deep love and admiration for reggae history in his work. With his DJ name being a direct tribute to King Tubby, he built a studio down on the coast in his Brighton hometown in the mode of the likes of Channel One and Treasure Isle. He also styled his music after the sounds that emerged from those studios during the heady days of the 1970s and 1980s. In the past he has collaborated with Ariwa legend the Mad Professor and the very talented Hollie Cook, plus a load of other big names away from the reggae arena.

His new project In The Viper’s Shadow is unashamedly in the thrall of “classic” reggae and dub and the talent he has assembled for it is uniformly excellent. Littered with legends one might say, ranging from the wonderfully expressive voice of ex-Sensation Cornell Campbell, to DJ toasting master Big Youth’s, to the quite brilliant Marcia Griffiths. But also there’s some great newer names on show, with Shniece McMenamin in no way being out of her depth amongst the above and the musical accompaniment being a good fit too.

But let us look at things in more detail from the start. Set opener Two Timer kicks things off in a fair old fashion, setting down a marker for high quality modern reggae, whilst harking back to that earlier age. It oddly enough also seems exactly right for now. This is beautifully fresh, with Cornel Campbell sounding right back at the top of his game, plus some good toasting from dancehall mainstay Tippa Irie. There’s also a lovely and warm organ sound – though roots reggae is the reference point here there are little touches like that take things away from being a mere tribute to times past.

Following track Get Ready, a cover of the old Temptations classic, may seem like an odd choice until you remember that back in reggae’s heyday the Motown/Stax songbook got regularly dipped into. Big Youth’s gold tones light things up first, then it turns into a good-natured duel between George Dekker’s sweet vocal and BY’s deep and spiritual sounding toast.

Taking as its basis a song that was an old 50s pop hit, Deep Sleep develops from these roots into a nice mid-pace skank. The doo wop/soul style breakdown impresses and there is some cool sax on this one and echo-laden dub effects, with Shniece McMenamin’s voice shining. She and Earl 16 who also features on this LP are a Dreadzone alumni, but in the future a full album of her own would be truly something to look forward to.

Nothing to do with Only Fools And Horses, Cassandra is in the classic 70s reggae love song mode, with Earl 16 excelling. This is more in a roots style with a choice bit of sax and lovely clavinet line. Sounds as though it could have been built on an old rocksteady rhythm, just like in the old days. Side one finished with a cover of the Ethiopians’ classic Everything Crash. This one features Big Youth and George Dekker again and the latter’s voice really shows up well. George really is an ace (sorry) in the pack here and works great alongside Big Youth’s echo-drenched exaltations

Side two starts with The Break by Winston Francis, whose career began at Studio One. He’s in good voice and there is a little less in the way of dub effects here, more just a straightforward reggae love song. The contrast is nice and reveals Fatty’s light touch – he doesn’t always need to lay on the effects thick to succeed in his aims. I must mention the backing vocals on this, restrained, light but supportive to the main voice. There’s some neat guitar picking too, nice touches everywhere in fact.

Next the one and only Marcia Griffiths recuts her 70s hit Steppin’ Out Of Babylon with Big Youth – she sounds great as always and the percussion on this is really good. The manner of this piece is placid and calm, a truly stately and dignified update. Then Cornel is back with Queen Of Minstrel, another slower piece (but still danceable) with brass working overtime and the backing vocals again being a real asset in supporting Campbell’s excellent tones.

Tonight is like peak Big Youth, he’s on fire here and Earl 16 provides some sweet vocals to bolster a real dance number, I couldn’t sit still to this one. On final track Trouble Shniece and percussionist Horseman take the reins, with Horseman’s throaty DJ style taking us into deep roots territory. Again Shniece performs faultlessly, there’s lovely jazz flow to her singing. The song itself is a baleful warning, very relevant in this day and age to stand and fight for what you believe in. A righteous and inspiring end to the album.

Though In The Viper’s Shadow obviously harks back to reggae’s golden era for inspiration, the sounds Fatty employs bring a new, fresh and defiant feel to the project. There is a lack of ego in letting the singers, players and toasters shine whilst he tinkers away in the background, adding little ideas here and there which have a big effect. All of this together results in an exuberant, tuneful and joyous piece of work. A real 21st century rocksteady delight.