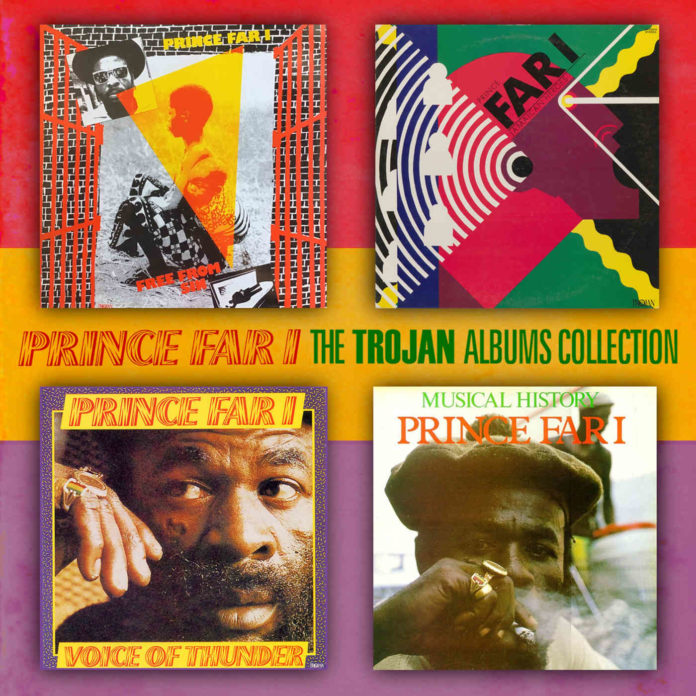 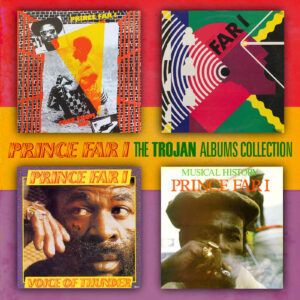 An excellent 2CD set that brings together the entirety of Prince Far I’ vocal recordings for Trojan Records, a period which today is widely regarded to be his finest work.

The set is essentially a reissue of the “Heavy Manners: Anthology 1977-83” set that Sanctuary Music released back in 2003, a mint copy of which will set you back around £50 which demonstrates that this reissue is long overdue. This edition omits the tracks ‘Heavy Manners’, ‘Survival’, and ‘Stop The War’, but does add ‘David’. Sadly, the collection has not been treated to the lavish clamshell packaging that Cherry Red do so well, instead we get 2CD’s in a jewel case accompanied by a 16pg booklet that utilise the various notes with previous reissues.

There is no indication that the tracks have been remastered, remixed etc.

Michael Williams aka Prince Far I was one of the reggae performers who’s music filled the gap in the early punk clubs, with no actual records to play celebrated DJ’s like Don Letts at The Roxy, or Norman Killion at Eric’s (Liverpool) would pump out the dub and roots reggae; the critical lyrics instantly connecting with the punk crowd. Prince Far I had however been around for a good decade or so prior to this exposure, exposure that caused Trojan Records to sign him in 1979, a label he remained with up until his life was cut short whilst visiting a friend in Portmore, Jamaica in late summer 1983.

I recall first hearing Prince Far I when listening to John Peel in my mid-teens, and again when I attended the now legendary Eric’s matinee gigs, gigs set up specifically for under 18’s; to hear those dub tracks on a full PA system was quite overawing, the bass from tracks like ‘Free From Sin’ would pin you to the floor, and then that voice, rasping, sublimely low introducing me to “natty dreads”, “Jah Rastafari” and the concept of “I and I”.

Far I sang with such gravitas, the intonation of an elder, a wise man. His backing band The Arabs were made up from the Roots Radics, names like Earl ‘Chinna’ Smith, Flabba Holt, Style Scott, the latter of which I became more familiar with via his work with Adrian Sherwood.

This collection showcases Prince Far I when he was in control of production duties, as such we are witness to his vision – together with The Arabs he crafted some of the hardest dub reggae, there is melody aplenty, tracks like ‘Light Of Fire’ has warmth sitting alongside copious echo delay.

“Jamaican Heroes” was released in 1980 and saw Far I and The Roots Radics at the height of their creativity, they provide a rich cavernous platform for Far I’s dread vision, lyrical to point as he encourages followers to “leave Babylon, and return to Africa” during ‘Golden Throne’.

‘Voice Of Thunder’ saw Far I to continue to develop, the sound is stripped back, each instrument being given ample room to breathe alongside Far I’s steely voice, his vocal incantation on ‘Tribute To Bob Marley’ is heavy with both respect and authority, whilst ‘Every Time I Hear The Word’ is an early excursion into an echo chamber later explored by the likes of Dub Syndicate, whilst closer ‘Skinhead’ reminds is that Far I wasn’t afraid to confront the issues of the time, regularly taking swipes at social inequality, and in particular Michael Manley’s government

This collection neatly warps up the later period of Far I’s life and makes it clear that he was far more than a DJ, he was a storyteller, a commentator who alongside The Arabs created rhythms that continue to resonate today.