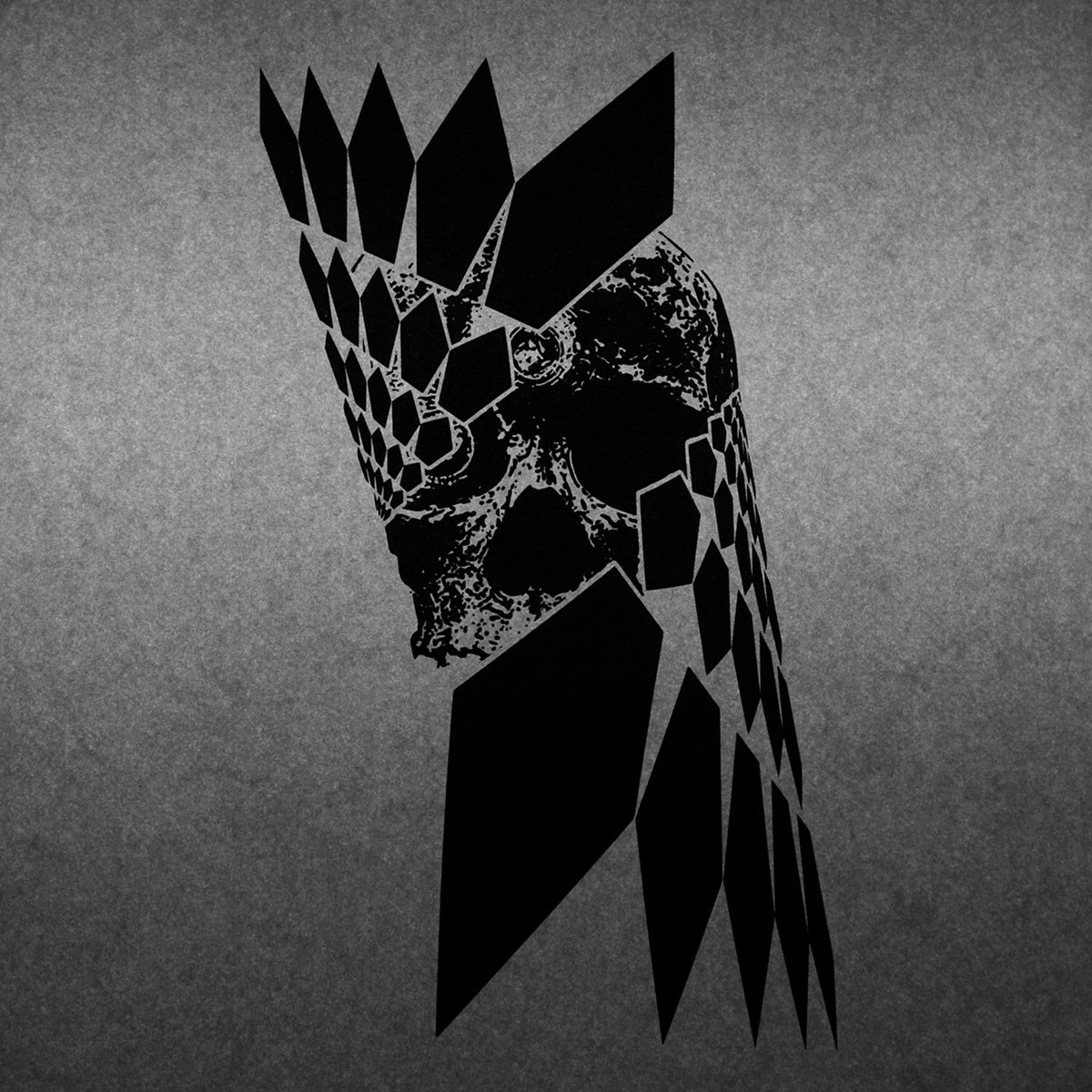 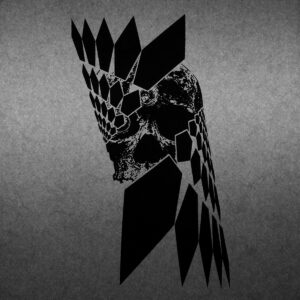 Michael Petalengro reviews the new release for Louder Than War.

I know the tangle of people here is a thing, I’m used to the madness of it but there is a cadence and a rhythm to this. Everybody marching in step, most dressed in that black. I say ‘that’ black, it’s the black with the stains on it, the dog hairs and the food stains. The stain of lifestyle probably too.

Primitive Knot were born in 2014 and I think about that year and it’s all dust, all shapes. You wonder what kind of zeitgeist brought that screaming silver and vanta black beast into the world. What madness they have. I’m sitting in the drivers seat of a friends 1982 4 litre Jaguar something, I don’t know. But this morning I downloaded Primitive Knots new offering ‘Sub Temple Ov The Mirror Cosmos’ and put it on the angst-tech, the ‘DIE-POD’ and plug that thing into the beasts sound system and it’s all about beasts now and I roll a little one out and pull down that window as the shoppers scatter under the 300w speakers of death he has put in the boot and I’m laughing straight away as the first track boosts the brainwaves and batters the thick glass of the Jag. Pull back the seat and slide it back and it’s the thick movement of well pressed steel, thick seat love. Boom town space rituals on half power. I can’t afford to let Primitive Knot make a mess of his cream maybe tan leather. I’ve got my sunglasses on see. I can’t exactly see because there are black clouds here, over the Black Jag, over the tinted black glass.

Track lists? I’m reviewing the whole idea of it, the complete thing and that’s ok too. I suspect the sound system will drain the battery and a police car drives past slowly and cops stare inside the Jag at me tapping my nicotine stained finger against the steering wheel. Fudge making. Space fudge really as a staccato beat under that stiff hand of Jack Reid the guitarist. Why is he stiff handed? It requires it. There is no need for flounce and bounce. This is not some intricate balloon of an album, it has things to say on ‘Stigmata of the Descending Hierarchy’. So they roll with that and it booms and looms under the dashboard with a heavy relentless pressure. Vocals are subliminal and unattached in a radio voice that would come from THAT space station where they cower under the awful idea that something indeed looms outside in that alien landscape. In that landscape nothing was designed except by a mind so broken it has lost a grip on it’s own madness and the rhythm is coarse and strong. I have to get out of the car. Of course. It’s a tomb at the moment. Nobody can hear you dream in space and she walks back towards the car in those heels and walks past then is gone around the volume of ‘Interstellar Pulse Erotique’ and here, the sound is vast.

He (I) moves his (my) hand through his (my) Black/Grey hair and he (I) wonders. I look at my hands scarred by Fire and Factory, the muscles in my arms Iron made from casting metal, castigating the fallen, arms that are guilty of Crimes. In the afternoon light my hands, in the bass of the tracks, they are not innocent hands. Others would look to their Gods for some sense of order and justice but not me. And not this band either. The track is again subliminal bare electronic pressure pulses and loud it disturbs the Rasta man in the car next to mine and he isn’t happy, but I am and I smile at him. Cosmic violence here now?

What is the point of Primitive Knot? Their music burns holes. Taps words on a wand, it wanders blind paths. We find a sick rhythm and a point in the song to seize and manipulate, cast meaning on it, maybe write a collection of lies we can weave ourselves and believe. From the Abyss another song ‘In the Desert We are Found’ it’s another secret word, a delicate pose. A special fire to kindle and tend, we coat our songs in innocence always, but it’s like a shellac to burn off and the song chips and files away at the barren wastes of our day to day doings. It reverberates through this car park. The song is shaking the windows of the Jag and I want to get back in and encompass myself in it, deep within it, but it’s not the time, I’m only writing about it. On the car park a woman shouts something at me but her words are taken away by the winds. Don’t annihilated souls love to cheer and bray?

I look down at my hands and see Primitive Knot have metaphysically split the skin at the wrists and the imagined blood flows freely into the dirty tarmac and a little on the black Jag. I draw Sigils in the paint with mine own blood and pull my hood further down over my face so the Brothers, the Knot will not stop their own manipulations. They may sire their greedy words and adjust their meaning as ‘Helixes of UnLight’ terrifies the ramblers and the bumblers, I pull the magic from the music and plough back through times that have passed. My sin a greater thing than this bands but….I see others, and they call to me…

‘Sub Temple ov the Mirror Cosmos’ is a tricky thing. I was first introduced to the band by a girl named Wiggly and she crammed a disc into my hand with a kiss and a promise then was gone off into the cosmos. Of course I have to weave some sort of narrative, it’s a record review and I’m thinking about Hawkwind and 1972’s seminal masterpiece ‘Space Ritual’ and also the work of Robert Calvert ‘Lucky Leif’ maybe I can grab ‘Can’ and ‘Neu’ too but it’s all so twee grabbing onto these bands of the past and indeed who listens to Hawkwind now apart from those men lost in the spaces where the engines have died and they just drift. There are gaps between the notes within this album that the songs that precede them have drilled from solid influence. It’s as solid as this Jaguar, and as I put my head on the roof I can feel the power of them and yes it’s subliminal much of it. But it has Manchester there right underneath every pulsating track. We know Manchester, we know it’s thick musical tendrils that absorb the blackest of clouds above and spit them out in colourful streams of musical madness. But this is different. The Primitive Knot is a filter. They weave and give birth to songs that would be too horrific for the ears of the uninitiated. Filtered yes. Manchester is a filter. Primitive Knot is a filter too.

I caught them live in that place. It was as black as perhaps the hearts of those uninitiated who stood and spoke loudly as the music crept into us. Reading the endless arguments on this subject between the thankless bastards of ‘those who shout during songs’. It’s interesting that this band are coming from opposite angles, and seem to arrive at similar places. The real work of this albums transformative effects may be very difficult but if anything, I’d say that is the common ground of the new thing, the synthesis of psychogeography and psychoaction.

She bopped around the dance floor by herself as I watched her push out that little arse for effect as Primitive Knot made the stage a ritual space. Bop Bop Bop heels sliding across the floor. Zzzzzip. Those titties she pushed out as the hooded forms of the band did jive their thing. Bop Bop Bop. Sip that triple whisky. Shut my eyes. Lick A Shot. Her white tight thing glowing under the black light. There was an old dude dancing, he had a shit beard and some flare for talking shit and he breathed on her. She put her hand on his neck and ground her sex on him. But I was gone, the transformation was complete and the Jag outside was heated and slick. A space vehicle, an Orgone Accumulator of tremendous effect.

The Primitive Knot are so fire-breathing, so energetic, so cunning, so real, and it’s having results so amazing that it just makes me endeared to the whole idea of a twisted Temple Ov The Mirror Cosmos – I’m ready to die for the music, at this point. And I’m already ready to die for the pantomime, it’s the same feeling I have for the pantomime, because Primitive Knot is us, you’re Primitive Knot, you are the ritual, right down to your fucking Vans shoes when you don’t even skate. I resisted, later on in the Travelodge trying in the blackness of my sleep to shove every thought away as chaff in the wind. But the sound of the ritualising of Primitive Knot was purposeful. Thus wind is born, and solidified as a monad of the reality they build and I was caught. A thought is all it took and the hook was pulled deep and I could not shake free.