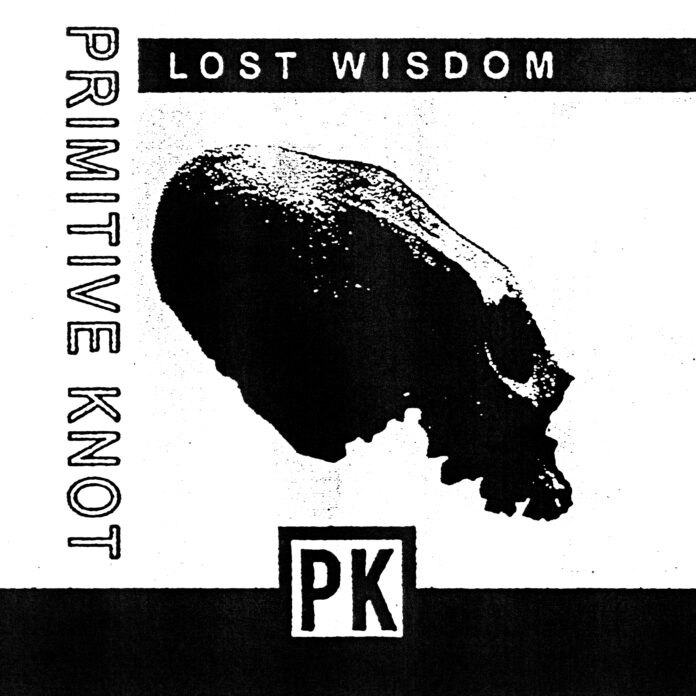 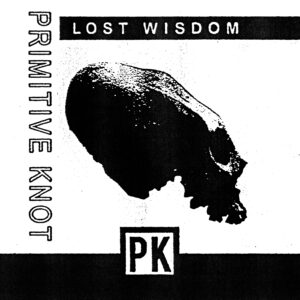 Andy Brown goes searching for some Lost Wisdom and finds himself immersed in an ominous world of riffs, doom and noise laid out by one-man riff-machine, Primitive Knot. Another satisfyingly uncompromising release from Manchester’s mysterious Jim Knot.

When I say the new Primitive Knot album is heavy, I mean the kind of heavy you can feel in your bones. The kind of heavy that rattles through your ribcage and reverberates through your cranium. The spirit of Sabbath and Motörhead subsumed into a monumentally heavy stew of sludge metal, noise and doom. The whole album guided by an aesthetic and attitude that pushes everything firmly into-the-red. Make no mistake, Lost Wisdom is an extreme and uncompromising album.

I first heard Primitive Knot via Thee Opener Of The Way, an album that collected a number of limited cassette releases to create a sprawling monolith of deep drones, otherworldly chants and cosmic dread. A stunning introduction and the mere tip of the iceberg. Alongside a steady supply of increasingly brutal Primitive Knot releases, Jim Knot also finds time to release sci-fi indebted industrial-psych as Orion Syndicate and doom-laden synth scores as Witch Root. That’s before I’ve even mentioned the numerous collaborative projects. It’s an impressive and ever-expanding body of work that surely makes Knot one of the most productive musicians in Manchester. Everything driven by a genuine love for all things heavy, strange and esoteric.

The unfettered riff-worship begins with the pile-driving, celestial doom of Arc Of Transcendence. Tune into Knot’s frequency and you’ll be hypnotised for the rest of the album. An ostensibly simple and immensely satisfying, desert-rock riff that sounds like it’s bleeding through a wall of half-battered, well-worn amplifiers. Knot’s voice buried low in the mix, repeating the songs title like some ritualistic mantra. With devil horns at the ready I clamber aboard the arc and strap myself in for some much welcome, musical turbulence. Spacejunk steams in with a ridiculously brutal, industrial strength rhythm. The sound is tight, manic and confrontational. The superb Highway Lover takes a severely mutated ZZ Top-style riff and filters it through industrial clatter and a hefty distortion pedal marked ‘pure filth’.

The title track finds Knot with his foot firmly on the accelerator, bursting through the sound barrier like Killing Joke in a particularly foul mood. Track-after-track conjuring apocalyptic images of crumbled buildings and decimated cities; a distinctly dystopian feel to the endless black hole of riffs emanating from the speakers. A pretty apt soundtrack for 2020, I think you’ll agree? You can hear the rumble of the speakers on the thunderous Wow! Signal, every sinew straining under the weight of the sound. “Are we receiving?” chants a thoroughly possessed Knot under a tsunami of sludge and bass-heavy noise. The doom-laden dirge of Solace offers nothing of the sort while Doomstruck lives up to its rather appropriate title.

The belligerent Skelter Helter (see what’s happened there?) mercilessly clubs us into submission while Relentless ensures that the album remains just that, utterly relentless. Lost Wisdom doesn’t let up for one single second. After 9 skull-crushing tracks, the final song wades in for the killer blow. Set The Controls For Oblivion is a Lovecraftian-level cosmic nightmare built on a repetitive, increasingly unforgiving rhythm and some of the nastiest guitar tones you’ve ever heard. It’s Electric Wizard playing Hawkwind covers in a dirty, abandoned basement. It’s that good!

There isn’t a whole lot of variety here but to see that as a negative would be to miss the point entirely. Lost Wisdom is the pure, unfiltered manifestation of a mindset and musical approach. It’s the sound that dictionaries will henceforth have to reference under the word ‘heavy’. It’s the place you turn your amplifier dial to when 11 just won’t cut it anymore. An accomplished, impossibly dark and overwhelmingly ominous triumph.