Photo above and below © Martin J Windebank

Featuring: The Primevals | The Reverse Cowgirls | The Pharisees

For Louder Than War, Gus Ironside reports back from Glasgow band The Primevals album launch, a night he describes as “one of the most intense, righteous nights of rock ‘n’ roll I’ve witnessed since The Stooges visited the UK in 2011.”

The event was the album launch for ‘Tales of Endless Bliss’, the latest album from Glaswegian garage rock legends The Primevals, fresh from a triumphant tour of France. Helping the veterans celebrate the new addition to their glorious back catalogue were The Pharisees and The Reverse Cowgirls.

The Pharisees kicked things off as a slimmed-down duo; bass-player Anissa Tonberg being unavailable to play at this particular show, it was left to singer/guitarist Ben Cavanagh and his drumming brother Matt to hold the fort, and they made up for the absence of low end with a frenzied, high-energy performance of skill and charm. The band have their own distinctive brand of country and gospel inflected primitive rock ‘n’ roll which really deserves to be heard by a wider audience.

The audience responded enthusiastically to The Pharisees’ inspired mayhem with some wild dancing and warm applause. Ben sang and played guitar like a man on the cusp of a great adventure, while Matt provided sure-footed drumming and backing vocals, covering admirably for the loss of bass. A great start to the night, and hopefully The Pharisees will release an album at some point in the near future.

Next up was The Reverse Cowgirls, fronted by the suave and charismatic Hugh Mclachlan. Looking like a post-acid trip Roger Sterling with a Hasil Adkins fixation, Mclachlan had the crowd in the palm of his hand as he led the well-drilled and committed Cowgirls through an exuberant set of cow-punk barnstormers, with crowd favourite ‘Dead Will Rise’ being an obvious highlight. 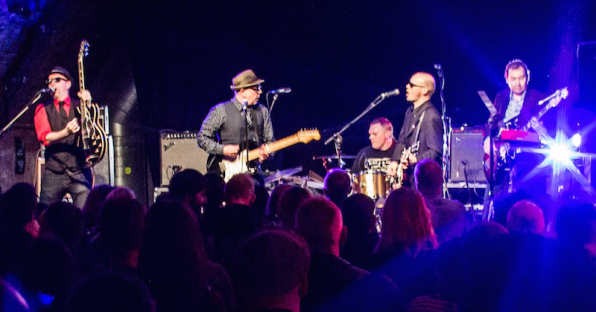 All four Cowgirls were on top form, with highly effective zoo music tribal tattoos supplied by drummer John Gordon and wired lead guitar from Greg Ginn doppleganger guitarist Stephen Cafferty. Special praise must go to bass-player Alaine Alison Walls for her sublime timing and rhythmic feel, which gave the band its gleeful, stomping momentum. Raw and thrilling debut album “Hokum” was on sale at the merch stall, but the new songs in the set suggest that a scorching follow-up is due soon.

By this point in the evening, the audience was having a ball, and was well-primed for the arrival of the dapper Primevals, full of joi de vivre and clearly still buzzing from their French tour. Singer Michael Rooney was in his element as he led the band with the authority of Captain Beefheart, while new boy bassist Ady Gillespie brought the funk, his gentle giant demeanour reminiscent of Arthur Kane, sans tu-tu and plaster-cast.  Implacable drummer Paul Bridges rocked the heavy grooves as guitarists Tom Rafferty and Martyn Rodgers, resplendent in fedoras and pointy boots (special mention for Tom’s eye-catching white snakeskin boots), delivered all manner of garage-blues guitar storms. Kicking off with an opening salvo of ‘Eternal Hotfire’, ‘Stream of Life’ and ‘Predilection for the Blues’, the band exuded confidence as they blazed through a set of classics from the entire breadth of their career  and showcased fresh and vital new tracks from ‘Tales of Endless Bliss’.

Feral versions of Primevals’ live staples ‘Saint Jack’ and ‘Way Beyond Tore Up’ rubbed shoulders with the instant hit of new songs including ‘Pink Cloud’ and the testifying ‘Tell It Now’. ‘Tales of Endless Bliss’ hadn’t been released in the UK prior to the show, so the audience were hearing these songs with fresh ears, but it was abundantly clear that The Primevals have dug back into their garage r’n’b roots for the new album, coming up with songs with the lean, soulful attitude of The Pretty Things in their ‘Get The Picture?’ prime.

The entrance fee for this show was only six quid and none of the bands are making substantial money out of playing rock ‘n’ roll; they are doing this for the sheer love of it and all three bands played their hearts out, to the delight of the appreciative audience. The atmosphere of the evening was summed up by one of the Primevals’ older songs, ‘Spiritual’; the passionate purity of the bands’ performances generated a transcendental state in the suitably skuzzy cellar venue and we were transported in the same way that the MC5’s ‘Kick Out The Jams’’ or Pharoah Sanders’ The Creator Has a Masterplan’ can transport you.

This was the High Society, brothers and sisters; great rock ‘n’ roll can do that to you, and if this incandescent show is anything to go by, ‘Tales of Endless Bliss’ is going to be a righteous trip.

‘Tales of Endless Bliss’ will be reviewed by Louder Than War’s Joe Whyte on its UK release.

All words by Gus Ironside, whose Louder Than War archive is here. Live photos by Martin J Windebank.