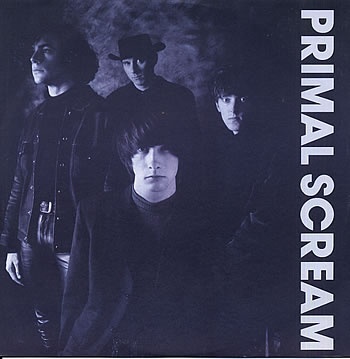 Former Primal Scream member, John “Joogs” Martin is writing his memoirs on the band’s early years. Arash Torabi fills us in on the details – and points out he’s looking for a publisher.

John Martin, former tambourine player with Primal Scream has a story to tell. He was in the band during the period many believe to be their finest, from 1984-’87, and he is currently working on his memoirs from that time. He was in Primal Scream when they released their C86 anthem Velocity Girl, the b-side of the band’s equally magical second single, Crystal Crescent on Creation Records. John Martin, aka Joogs, is pictured on the sleeve of the band’s third single, the achingly beautiful Gentle Tuesday (above, L-R: Robert Young (RIP), Jim Beattie (top) Bobby Gillespie  and John “The Joogs” Martin) after which he quit the band. He is also in the video:

A lot has been documented about Primal Scream and Creation Records, but the story John Martin offers is from a different perspective, and from first hand experience. The early, pre-fame Primals, unknown to most music fans when they looked and sounded like a cross between the Velvet Underground and The Byrds, and were obsessed with underground 60s psych and garage. The band’s iconic former guitarist, the recently deceased Robert Young was their bass-player then, and Bobby Gillespie’s songwriting partner was Jim Beattie, the 12 string guitar player who also quit the band not long after John Martin. As well as providing a strong live visual presence for Primal Scream, Martin was also involved in the band’s club night in Glasgow, the now legendary Splash One.

Read this recent interview with John Martin on a Creation Records fan website for a taste of what is to come in his book.

And he is looking for a publisher, so if anybody can link him up, please get in touch: joogs7@hotmail.com.