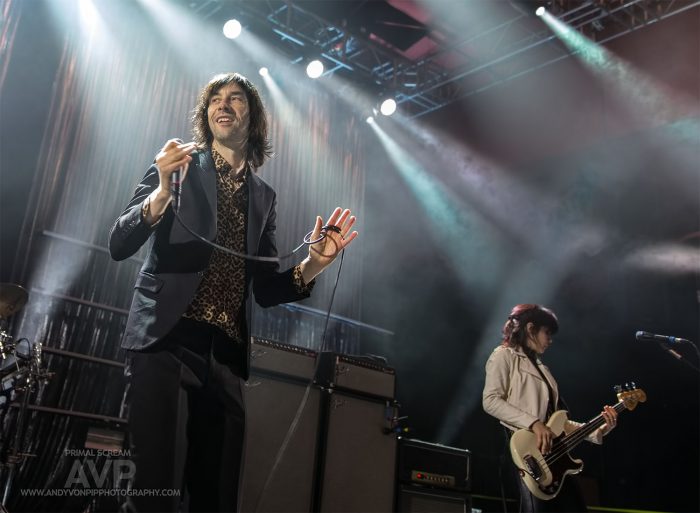 Few bands know how to party like Primal Scream. Andy Von Pip and Roxy Gillespie joined the festivities at The Olympia, Liverpool to see what this endlessly creative band had to offer the audience.

The Olympia in Liverpool is a beautiful old fashioned former theatre and its ornate red and gold decor lent a dramatic and majestic backdrop for  Primal Scream’s long-awaited return to the city.  As the crowd drifted in the atmosphere was relaxed as old fans mixed with new fans . They all knew it was going to be a hell of a party.

The support set from Bo Ningen had everything the wild Japanese rock outfit are becoming renowned for. The vocals soared over throbbing psych rock, at times the music was melodic, often shifting to something far heavier. Their squealing guitar riffs soared, whilst the synthesisers emphasised the vocals to add an extra dimension. With their unusual garb and waist length hair, Bo Ningen looked as experimental and avant-garde as they sounded. The crowd gave them a solid reception and loved their guitar- swinging finale. An interesting and intriguing set.

Primal Scream last played Liverpool as part of the Radio 5 line-up at the Echo Arena in 2013. With a number of Manchester gigs since then, their visit to the city was long overdue. Anticipation hung in the air, erupting into an ecstatic welcome as the band arrived on stage. ‘Movin’ On Up’ is an anthem and as an opening number was sure to set the tone for the night. This was what the audience had come for. Soberly dressed in a black jacket over a leopard print shirt, Bobby Gillespie was smiling from the word go. Was it the Liverpool banter, the ornate surroundings or just the solid appreciation radiating from the fans? Whatever the reason, the whole band looked happy and relaxed as they swung into ‘Where The Light Gets In’ featuring an excellent duet with bassist Simone Butler. 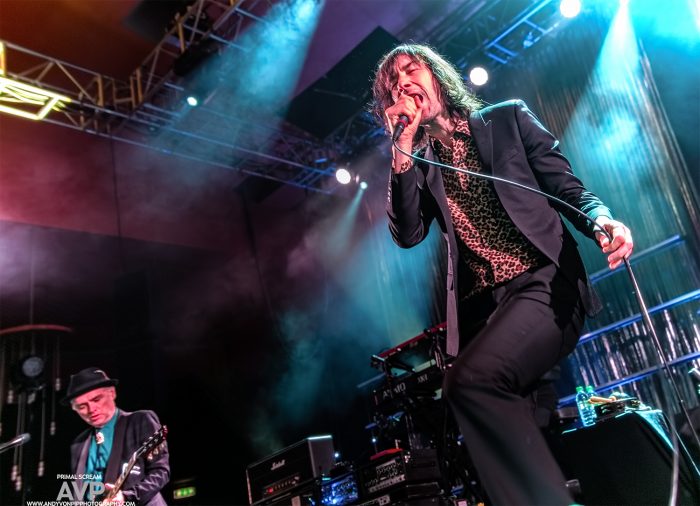 The tracks from their recent Chaosmosis album proved Primal Scream can still produce great songs. They interspersed newer material such as ‘(Feeling Like A) Demon Again’ and the superb ‘100% or Nothing’ with old favourites. Predictably it was the hits that really resonated with the fans: Shoot Speed, Kill Light, Jailbird, Accelerator and Swastika Eyes all sent the crowd into a frenzy. Bobby threw in a ballad ‘Cry Myself Blind’ and with Martin Duffy back in the fold, the keyboards were never going to disappoint. The tracks from Screamadelica included the stunning ‘Higher Than The Sun’, but it was ‘Loaded’ and Come Together’ that had the assembled throng dancing, singing and in a celebratory mood. After such an incredible set it was a given that crowd were going to want more as the band left the stage.

After the usual ritual of shouting, clapping and foot-stamping subsided, the band returned to be greeted by more whistles and wild applause. ‘Kill All Hippies’ was an exhilarating choice for an encore and the crowd went completely overboard when the band launched into an incredible version of ‘Country Girl’. The band seemed to be enjoying the experience as much as the fans , even when two over-enthusiastic members of the audience somehow got on stage, only to be quickly bundled away by security. Andy Innes smiled his way through the last tracks and Bobby Gillespie stood at the front of the stage when the rest of the band had left, his connection with the partisan crowd was there for all to see as he drank in the passion and adulation radiating from the fans. It was a beautiful ending to an amazing night.

Use of these images in any form without permission is illegal. If you wish to use /purchase or license any images please contact vonpip@yahoo.co.uk