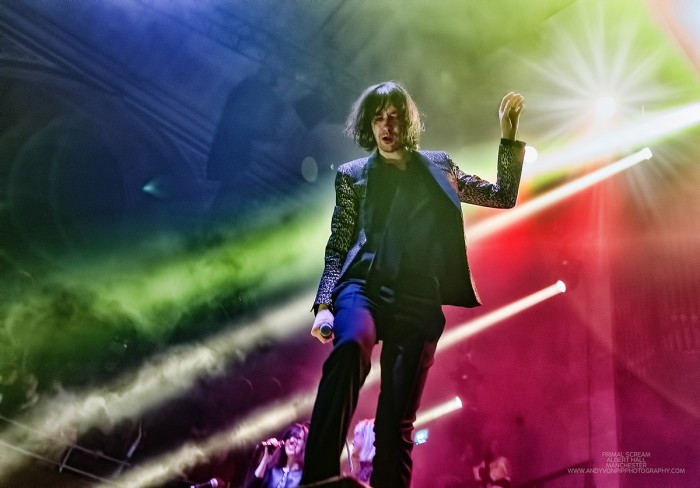 Louder Than Words reviewer Harry Mulligan caught up with Primal Scream in Glasgow, whilst Andy Von Pip photographed the band for us in Manchester’s Albert Hall, and was equally enamoured by the band – citing it as one of 3 of the best gigs of his life.

Primal Scream were an entirely different entity as they took the stage at the 02 on Sauchiehall Street, Glasgow (March 31st, 2016) from the one seen previously at Mani’s Last Stand – before his departure and return to the Stone Roses.  Gone also was Little Barrie who is off pursuing a solo career, and sadly, the knowledge that the beloved ‘ Throb’ was no longer with us pervaded the collective consciousness of the die-hard fans assembled.

The re-vamped line-up reiterated that a change is as good as a rest, and perhaps economics were at play. Primal Scream today are stripped back and minimalist; almost naive art in sonic form.  However. they are also robust and it works! The unit that performed on the night were dynamic, bombastic, svelte and sophisticated. Bobby Gillespie and Andrew Innes occupied their usual space, but with an economy of movement undetected before. There was a  stealth to them – a stealth that might come from years in a Rock n Roll Dojang. tae kwon do style: 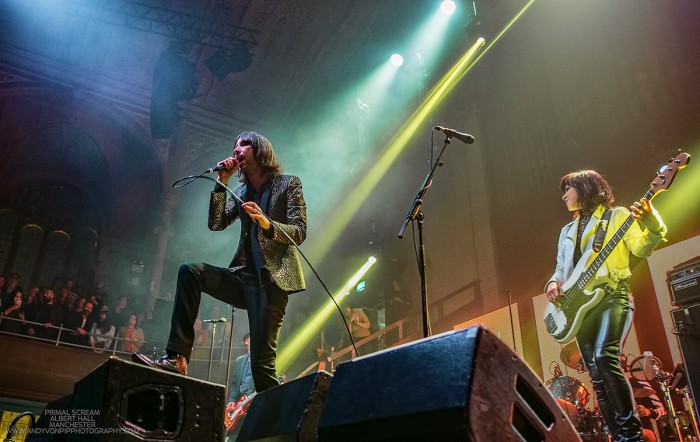 Andrew Innes sported short hair, a Marshall stack for a back-drop, and sounded like three guitarists distilled into one! Necessity is the mother of invention, and no touring unit can take three guitarists out in this age of austerity – unless your Iron Maiden. Immediately to his left, newbie Hannah Marsden, poised in a silver skirt looked futuristic in angular blonde hair, like a character from Blade Runner or The Fifth Element. When she opened her mouth for the first big chorus, (When the Light Get’s In), she filled the auditorium with her colossal voice, reminiscent of  Ellen Foley’s, the legendary backing vocalist for Pink Floyd, circa Dark Side of the Moon.  At times during this first single from Chaosmosis, the quasi-spiritual nature of this record is brought home: ‘It’s your Sin – Peace Begins Within’ goes the refrain.  A panoramic glance across the Stage revealed Simone Butler on bass:.  a Class Act, eyes determinedly locked onto Andrew Innes and perfectly locked into that muscled rhythm section, body syncopating towards Bobby in the center and then the audience.

Bobby… well what can be said? Simply – he owned it! The stage – the Sacred Ground was his, and well, he’s been at it for thirty five years plus, and everything he’s doing up there, body language included, speaks with an authority. He is in the best form of his life.  He’s relevant, lyrically more coherent than he ever has been, articulate because he has that literacy that comes  from being Scots-schooled and streetwise, charm and charisma rip out of him in Spades! Let’s have it right, he’s an endangered species and we love the mittens off him up here.

‘This used to be a cinema!’ he said, nonchalantly to the cheezin’ ‘hametoon’ crowd. ‘I used to go to the Pictures here: ah came here to see Desperately Seeking Susan … 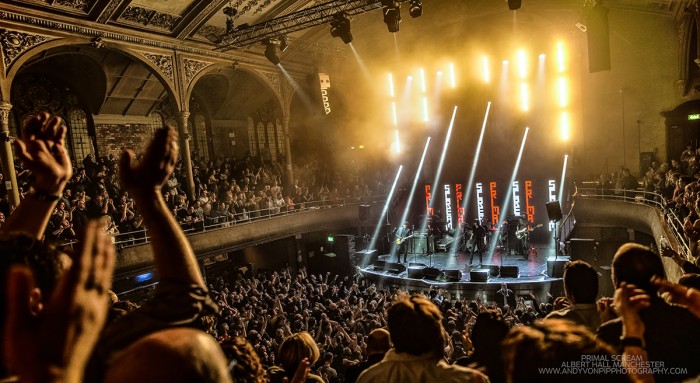 Although Bobby Gillespie may be cautiously reluctant to talk about his recovery from addiction, much of what he thinks and how he feels about it is expressed in Chaosmosis, itself a cathartic piece of writing. That the album as said has Spiritual themes and that much is self-evident. Hallelujah is an Anthem of one who has survived the Trenches of their own personal War Zone and with Bobby and Hannah together, filled the 02 like a Church of Post-Modernity.  These new songs are switched on, enlightened, and dare I say it, go to show that the road of excess can and does lead, every once in a while, to the Palace of Wisdom – although no-one would want that to be an incentive to the Weans.

The irony and juxtaposition of going from Killing All Hippies – through to Trippin’ on Your Love, all in  same set, makes one want to celebrate the fact that people make art out of the different dispositions and situations of their lives. David Bowie did it, Bobby and The Scream do it, and these songs are the artefacts that future music historian’s will take interest in and put under the microscope.

The show was hugely interactive, how could it not be when we were on Sauchiehall Street, in the Citadel of Rock that is Glasgow ?   The audience paid indirect respect to Glasvegas, resurrecting their ‘Here we Fucking Go’ chant, and ‘Bobby, Bobby, Bobby fucking G’.  It seemed totally appropriate when Glasvegas used to cite Bobby Gillespie,  early Mary Chain, and Primal Scream as their core influences when the author put them on in London pre-Columbia signing. The Scream cycled through their back catalogue, and wheeled out all Crowd Pleasers like ‘Rocks’, Swastika Eye’s which Gillespie self effacingly dedicated to himself. ‘Its alright, Its okay’, ‘Country Girl’ and ‘Come Together’ were all in there.

A mid-crowd conversation ensued with those I had attended with about the great Rolling Stones fetish that Bobby has, that we all have. ‘Everybody should have a Rolling Stones Fetish!’, was the collective sentiment and the overall conclusion as we processed the merits of the gig on the way to the door…

Ten out of Ten, the Best is Yet to Come!

Words by Harry Mulligan, you can find more at his Authors profile here.

Photos by Andy Von Pip, you can find Andy on Facebook and his own portfolio is here: