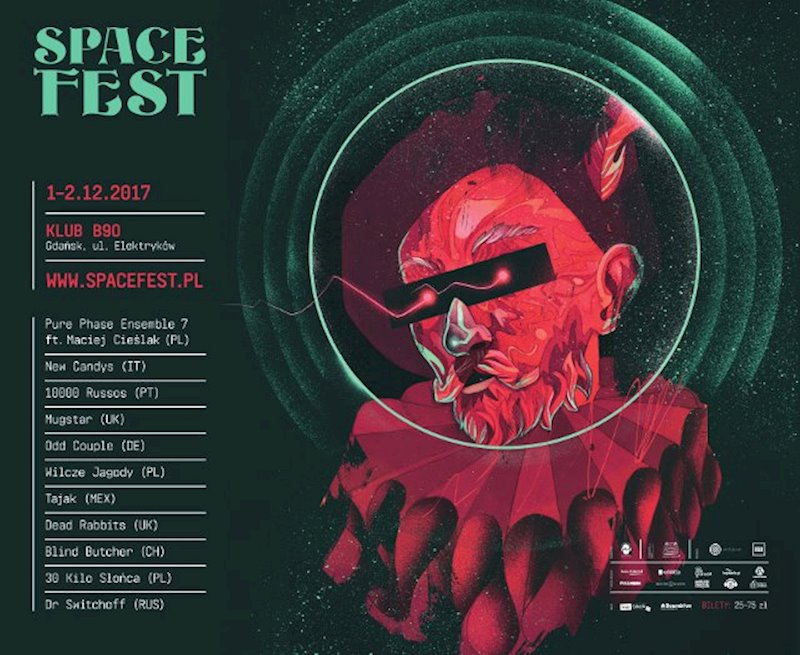 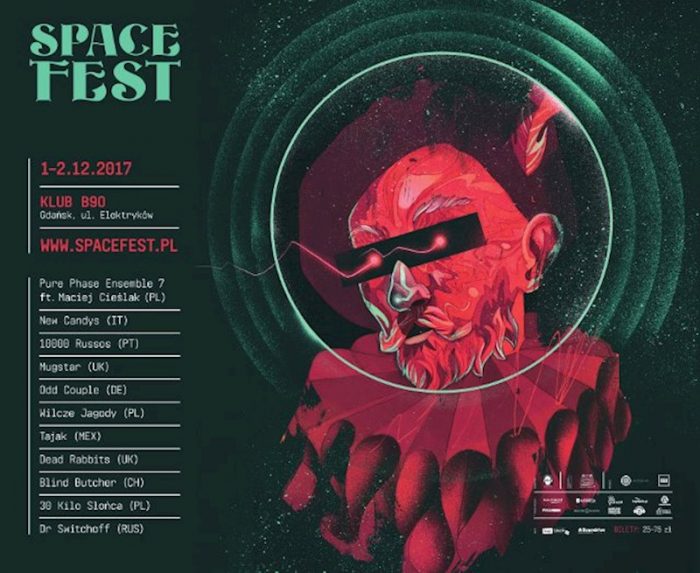 On December 1–2, Gdansk will, for the seventh time, host SpaceFest! – a festival of psychedelia celebrating guitar distortions, noise drones and all other weird sounds created under the influence of mysterious cosmic energy. This year, SpaceFest! is entering an entirely new orbit, with its new venue being the celebrated Klub B90!

SpaceFest! has figuratively transformed Gdansk into the intergalactic capital of Poland. In following with tradition, new psychedelia, Krautrock, space-rock and shoegaze lovers will find much for their musical palates. The rich diverse line-up provides ample opportunity to discover new artists, enjoy breath-taking visuals, immerse in a remarkably sizzling atmosphere, and spend two days in complete oblivion of the winter and cold outside.

Two days of concerts is preceded by a workshop that will see the new incarnation of Pure Phase Ensemble, an ephemeral group created especially for the festival. For five days, participants will rehearse at the Laznia 2 Centre for Contemporary Art, located in the Nowy Port district of Gdansk, The 2017 edition of Pure Phase Ensemble will be curated by Maciej Cieslak of the legendary Polish band Scianka.

The group’s makeup constantly changes, guided by the artistic vision of a new curator every year and directed by Anna Szynwelska and Karol Schwarz of Nasiono Records, who has been responsible for its musical cohesion from the very outset.

“We will try to invent music from scratch, and naturally fail at doing so, but let’s hope we create something interesting in the process,” says Maciej Cieslak of Scianka. The collective also involves Michal Gos (Oczi Cziorne, Lonker See), one of the most prominent musicians of the Gdansk-Sopot-Gdynia independent scene, on drums and Nasiono Records’ very own Karol Schwarz (7faz, KSAS), who has been responsible for the musical cohesion of the PPE project from the very outset, on bass guitar. The band’s line-up will be rounded out by young musicians from Poland and beyond. The results of this workshop will be presented live at SpaceFest! on December 2, and will be recorded and released on CD in 2018.

SpaceFest! 2017 will also feature Italy’s New Candys, who sound like a “psychedelic power trip that demands your attention from its opening bars” (Drowned in Sound). Portugal’s 10 000 Russos are a formidable modern psychedelic force, their industrial psych/post-punk charming fuzz-heads across the globe with its stomping, shamanic mantras and otherworldly krautrock slant.

Fans of space-rock and Krautrock should enjoy the massive Mugstar, whose music is said to be the sound of 10,000 suns exploding and pulsating with repetitive beauty, like a sonic mantra. Mugstar set sail for the sun in 2002 and have since completed numerous voyages with the likes of Mogwai, Oneida and Acid Mothers Temple, as well as recording a radio session with the legendary John Peel in 2004 and issuing split releases with Mudhoney and Oneida.

On the flip side, Switzerland’s Blind Butcher will offer a stage explosion of space rock, glam rock, glitter, lycra and sequins – a mix that will definitely see some wild dancing and heat up the atmosphere. Berlin’s Odd Couple, having outgrown the age-old framework of guitar, bass and drums with confident vehemence, will be performing tracks from their new record, which combines rock music, the language of Blues with riffs and keyboards under the cover of night, within the prism of a modern interpretation of Krautrock and the repetitive punching beat of classic hip-hop productions.

Mexico’s Tajak stages a noise-punk massacre with native tribal elements. Chaos, hypnosis, chords repeated until exhaustion and the sense of disorder. “An apocalypse in the shape of sound” perfectly describes what the band has achieved live. With two albums and numerous EPs in less than three years, the band’s influences range from Stooges, CAN and Suicide, to indigenous chants and the raging screams from each member’s own mental disorders.

For those interested in chilling out between shows, the smaller room will host film screenings and projections full of colourful, picturesque, and sometimes strongly surreal visions. Russia’s Dr. Switchoff will return this year to close SpaceFest with his fantastically eclectic DJ set and absurd visuals. He plays plays both on Friday and Saturday evenings, while New Candys will play a DJ set on Saturday.

SpaceFest! is organised by the Nasiono Association in cooperation with the Laznia Centre for Contemporary Art and Klub B90. The festival is co-financed by the City of Gdansk with media partners including Shameless Promotion PR, Drowned in Sound, Last Day Deaf, Radio Gdansk S.A., Gazeta Wyborcza Trójmiasto, Co Jest Grane 24, Trojmiasto.pl, Róbmy dobrze, Full Moon Magazine, Uwolnij Muzyke!, and Going.

In Gdansk this first weekend of December, music lovers will enjoy an unforgettable experiential journey at SpaceFest! – through both time and space. The cosmos awaits! Doors open at 7pm both nights. Tickets are available from Soundrive Tickets and KupBilecik.pl, as well as through the Going app.