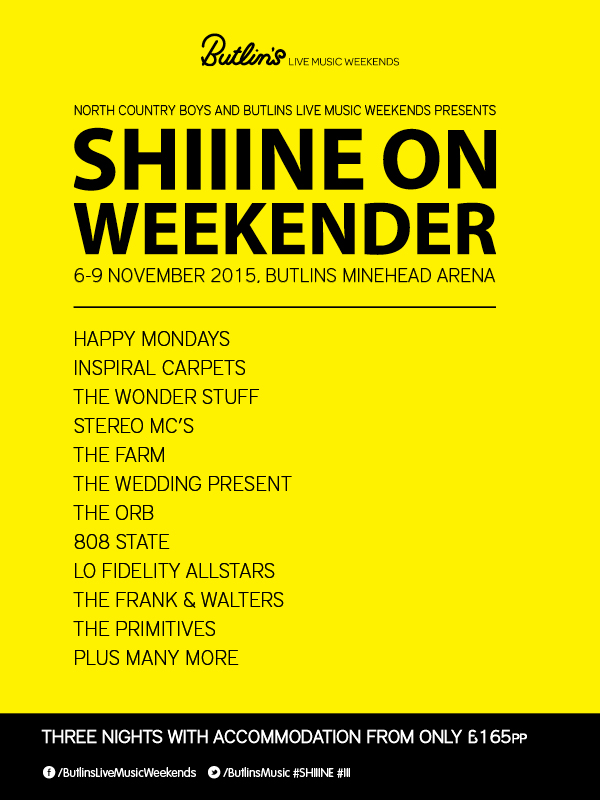 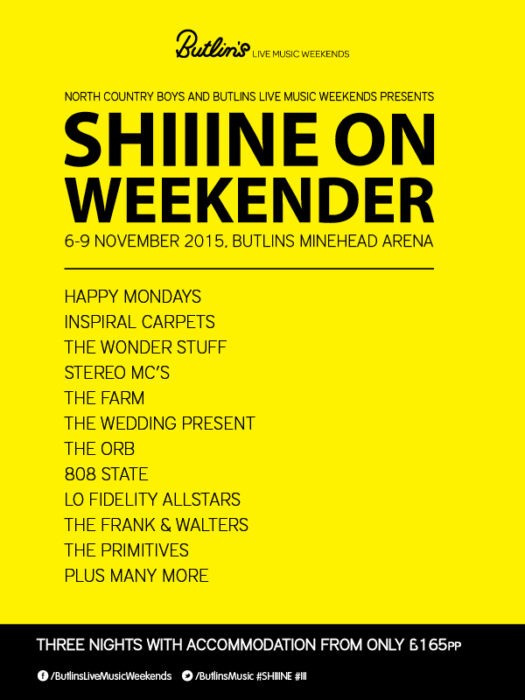 With a stellar lineup of acts from yesterday Katie Clare gives us the low down about November’s Shiiine On Weekender.

So yet another year the Glastonbury wizards have denied me a ticket – and an internet hunt makes 2015 look like it’ll be a lean festival year with Sonisphere, Global Gathering and RockNess among others already cancelled. There are a large number of mid-sized festivals that certainly looked great on the screen but the idea of a roughing it for 4 or 5 days in a field has lost its appeal now Pilton is not the destination point. Then along comes a new Somerset offering: Shiiine On Weekender at Butlin’s Arena Minehead: Three days of music including some of the most enduring and significant British bands of the late eighties and early nineties that encompass indie pop and rock, psychedelia, electronica and even acid house is well represented – all that and no camping!

Friday night headliners the Inspiral Carpets and The Farm both have a strong following and will definitely provide great shows and DJ’s Dave Booth and Terry Farley are certainly on the must see list. Along with the headline heavyweights there are certainly some intriguing options too, such as ex-The Bluetones singer Mark Morriss performing solo and Liverpools ’60s inspired indie pop band Space. However, what could well be Friday’s highlight are the ambient house pioneers The Orb who’s break through albums The Orb’s Adventures Beyond The Ultraworld and U.F.Orb were the go to CD’s for post clubbing cool downs. Even with an impressive back catalogue to work with the band continued to evolve and experimented with styles and delivery most recently in 2012 on The Observer In The Star House the band collaborating with Lee “Scratch” Perry produce a highly reggae-infused album.

Saturday offers up such a wealth of options it is certainly going to be a day full of clashes. The Happy Mondays were always a roll of the dice back in the day however in recent year it is less of a crapshoot and the band now commit to a performance in such a way they didn’t all those years ago and it really is worth it they are the ultimate party band and it’s tough to resist joining in. 808 State and Northside will certainly be worth seeking out as will Menswear wear with their new line, the band is fronted by original singer Johnny Dean, they have played several sell out shows in London and released a single Crash ’14 last year.

Looking like the highlight of the day The Clone Roses, if you can’t get Ian, John, Mani and Reni to the west coast these guys are certainly the next best thing. Guaranteed to turn the dance floor into a swaying hedonistic bouncing sing a long, totally reinvigorating the people who have perhaps had ‘had one to many’ and filling everyone with feel good sensations that’s what The Clones conveying The Stone Roses do and all without a whiff of artificial mimicry. 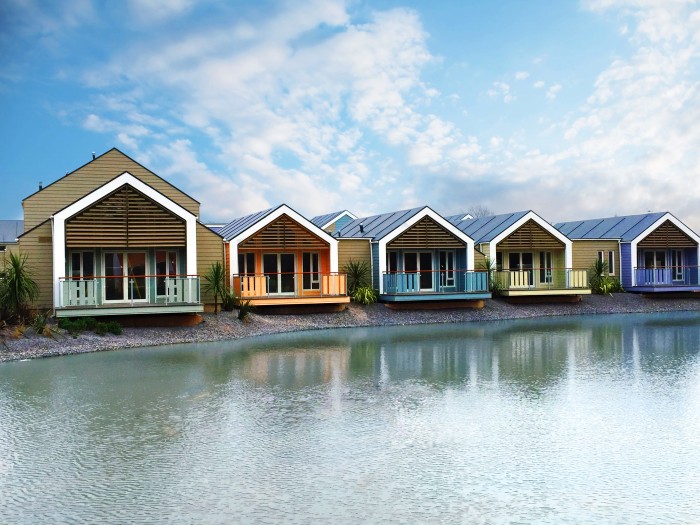 The Butlin’s Minehead resort is situated in a beautiful seaside town right in the heart of Exmoor, Somerset just a short walk from a delightful sandy beach in November you might still fancy a refreshing paddling in the sea if not it’ll certainly be a lovely walk with a beautiful view. A full weekend package is not only your ticket to all the bands all weekend but it includes your accommodation too so gather up your friends. Up to four can stay in your own brand new for 2015 West Lake Chalet. (Single person room only option and up to four person apartments are almost sold out so move fast if you are interested in those) The chalets are situated next to the sites peaceful West Lakes Village and with all you could need to make the weekend as comfortable as possible including a full kitchen with a dishwasher; a daily housekeeper and a large open plan lounge for pre gig get together drinks: certainly beats a mud filled tent. Butlin’s even offer a pay deposit now pay the balance later option if you’d rather spread the cost and all ticket holder have access to the entire site with its own supermarkets, restaurants, Splash Water World swimming pool, ten-pin bowling as well as theatre performances, cinema screenings, pool parties and even a new band stage – there is unlikely to be a spare minute all weekend and the added activities should keep you bright eyed and bushy tailed all ready for the third night of music which takes a slight move away from the strong Manchester vibes of Friday and Saturday.

Sunday starts off being well and truly spoiled with Eat, Frank and the Walters as well as Cud and The Telescopes there is going to be some high speed track and field work to get to see a bit of each of them. The top notch of choices doesn’t end there headlining The Wonder Stuff and The Wedding Present – both bands with strong front men that have gone through enormous number of line-up changes over the years however remain warmly in people hearts. Miles Hunt (The Wonder Stuff) is so engaging on stage and his youthful sprite and vitality is contagious you just don’t have lacklustre Wonder Stuff gigs. Their debut Eight Legged Groove Machine is still as vibrate and venom laden as it was 27 years ago and while HUP has more sentiment than sneer it too is testament to never jumping on the current bandwagon however always creating what comes from the heart. Even into the 90’s when the band found their most commercial success with Never Loved Elvis, an album musically more mature and diverse instrumentally it was peppier and less raw that previous albums and when the band played live, to this day Miles Hunt remains an unapologetically honest and irresistible creative performer: the perfect culmination to what will be a very special weekend.

~
There is an official website for Shiiine On Weekender with a whole host of information about the event and the accompanying Facebook page is the place to go for up to date information including plenty of excellent and exciting additions to the line up. They can also be found on Facebook.

For more details and booking options for Shiiine On Weekender go to the Butlin’s website. Alternatively you can call Butlin’s Booking on 0845 070 4734 (9am-9pm, 7 days a week) and talk to a Butlin’s representative who can guide you through the options. The full listing for Shiiine Weekender is not complete so keep an eye open for further acts yet to be confirmed.