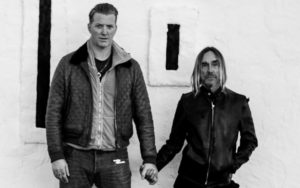 On the occasion of the US and European tour of renowned American singer and songwriter, Iggy Pop, the photographer Andreas Neumann and band member photographer Matt Helders exhibits at The Flood Gallery in London his series of photographs named AmericanValhalla :TheArtof” IggyPop–PostPopDepression”from June 23rd to July 7th 2016 .

From shots taken in the Californian desert to pictures revealing the singer’s performances on stage in Los Angeles, this exhibition expresses the cooperation and complicity between Josh Homme, Iggy Pop and Andreas Neumann, three artists whose fusion of talents generates a unique and intense photography. Neither commissioned nor premeditated, this series of photographs had originally been taken spontaneously between April and December 2015. For the German photographer it was simply the possibility to capture on film some of the magical moments generated by Iggy Pop and his band. A friendly encounter initiated by talented songwriter Josh Homme himself. The photographer’s work immediately seduced the two famous composers who decide to pursue and implement this new artistic collaboration; the visuals of the new album, a secret work in progress, will be signed by Andreas Neumann.

Iggy Pop describes the work as “pure artistic expression”, referring to the authentic moments captured by Neumann with his camera, which created a special bond between the photographer and the singer. Andreas Neumann was therefore able to embark on a mental and poetic journey with his photography and film, highlighting the spontaneity and the creative genius of Iggy Pop and Josh Homme.

Articulated into three main segments and gathering about thirty photographs, this exhibition invites the visitor to immediately discover the aesthetic universe of Andreas Neumann. The association of warm and contrasting colors meet, with rhythm and harmony, monochromatic and stylized images. In order to preserve a natural environment, the photographer decided against any processing or image retouching in order to generate a greater realism at first sight.

In front of the shots taken in the desert of Joshua Tree in southeastern California, the viewer is invited, in an almost mystical face­to­face, to think about the timelessness and universality of artistic expression. Neumann’s eyes see below the photographed subject and consider it in its entirety, with its environment, so as to reveal its real and sincere intimacy. Therefore the observer may live a cathartic experience.

The visuals used for the “Post Pop Depression” album’s iconography are a wonderful reminder of the creative power engendered by the merge of several artistic talents. To create the album’s cover, Andreas Neumann has given full dimension to the fruitful collaboration between Josh Homme, Iggy Pop, Dean Fertita and Matt Helders. Indeed, the characters contrastingly appear in a cold universe, almost alarming, modern, even futuristic or post­apocalyptic. “What interests me

are the perspectives,” says Neumann, “Josh Homme and I were on the same page. He had found this place, this garage, and he gave me carte blanche to manage the shooting, the choice of angles, the tones and light … The whole band was very confident and our cooperation has been very productive. The songs of the album inspired me a lot and led me to play with contrasts, it was very important for me to feel these sensations as I was looking for a certain intensity, a strength that I guess I have found and successfully captured in these pictures.”

Alongside Neumann’s photos we can see featured shots of Post Pop Depression Drummer and founding member of Indie Rock Band Arctic Monkeys and photographer, Matt Helders. Helders captured the scene from the inside while recording and living for 3 weeks the legendary desert recordingstudioRanchodelaLuna” “togetherwiththe“band”IggyPop,JoshHommeandDean Fertita in the the recording studio desert of Joshua Tree. Helders shots is stylish documentary B&W using vintage lenses. His shots show a great eye and is capturing always great emotion and story telling detail with great contrasty, sensitivity and human warmth.

During the recording of Post Pop Depression, other than contributing musically I wanted to tell my side of the story with photography. My main intention was to just shoot in a documentary style and to not be in everybody’s face with a camera all day, I think that’s how I was able to capture intimate moments. First and foremost I was there as the drummer, but I would always have a couple of cameras within reach. At the time, I didn’t know what story I was telling, that was the nature of the whole record. We were making a record on the premise that if was bad or we were just not happy with it, nobody would ever hear it and we’d bury it in the desert.

My aim was to simply document the process but with a creative approach, but also economically, not shooting thousands of photos a day, I shoot a lot of film so when I do occasionally use digital, I still have the same approach, as if I only have a limited amount of frames. A place like Rancho de la Luna in Joshua Tree is full of backdrops, landscapes, beautiful light. For me, it was important to show the fact that we were somewhere so special for this very unique experience.”

Visitors will be able to admire images that reflect the incredible artistic performances of Iggy Pop, considered to be one of the most influential rock artists in the world. These stolen moments have been shot during privileged concerts organized in Los Angeles, on the occasion of the launch of the new album “Post Pop Depression” end of 2015. These pictures unveil the true splendor of the artist, who remains, between eccentricity and excessiveness, the king of the scene, countlessly offering his art, heart and soul.

These exhibited photographs are a limited edition. Numbered, they are also signed by Josh Homme, Iggy Pop and Andreas Neumann and Matt Helders. The Fine art prints will be available for sale in the THE FLOOD GALLERY for 2 weeks June 23rd to July 7th 2016 .https://www.thefloodgallery.com

Born in 1967 in Germany, this talented photographer first began his career in the world of advertising. Very soon his artistic sensitivity led him to shoot with his own custom cameras and lenses inordertobringanewvisiontotheworldofadvertisingandmusic.Touchedbytheworks o f A n s e l A d a m s a n d I t a l i a n B a r o q u e P a i n t e r M i c h e l a n g e l o M e r i s i d a C a r a v a g g i o , w h o s e w o r k s h e admired, Neumann’s photography reflects a particular and regular willingness to play with contrasts while obtaining stylized, epic and timeless images. He has done photo shoots with Pelé, Lenny Kravitz, Barry Bonds, Dwight Howard and worked with Canon, Alfa Romeo and Vogue. In 2015, commissioned by the television show affiliated to the Mexican wrestling federation, Lucha Underground (US), he shot a series of pictures to publish the book “Lucha: A Tribute”, a real journey into the fascinating world of famous Luchadores. After Mexico City and soon Los Angeles , this book will be on sale in Paris, at the well­known Colette boutique in June 2016.