One of the most racially mixed (and politically active) areas of Glasgow is to hold its own celebration of music and multiculturalism over three days this August. With a lineup that’s not to be missed, this should be a helluva weekend party.

The Trust involved in the reclamation and re-invigoration of the old Govanhill Baths (a formerly crumbling Victorian swimming pool and the focus of some pretty tasty televised local riots back about 15 years ago; google it!) are the hub and nerve centre for the event which takes place over the weekend of 25-26th August in Queens Park in the city’s Southside. The park borders Shawlands, Mount Florida (where Hampden Stadium is) and Govanhill and is easily reached by bus, train or a brisk walk.

The organisers have pulled off something of a coup; the first day (Saturday 26th) comprises a parade and street entertainment. The Sunday is Roots Radical Reggae in full effect. With Aswad, Misty In Roots and Black Roots headlining on the Sunday evening, this should prove to be a treat for fans of Jamaican culture and the best of British reggae music. The Rum Shack, an excellent Jamaican-themed bar and Dance Hall is nearby, too, should you need a refreshment and a seat! With tickets at very reasonable prices across the weekend or single days, this could well be Glasgow’s event of the summer. If the weather holds out…

The Monday has another sterling line-up. Black Grape (whose new album is a sparkling return to form) will be appearing with a supporting cast including local funsters Colonel Mustard and the Dijon Five as well as Bigg Taj providing some beat-boxing and hip-hop grooves.

Labour leader Jeremy Corbyn and First Minister Nicola Sturgeon (who’s the local MSP for Govanhill) are also making appearances across the festival but I presume on separate days. Or maybe they’re gonna scrap “Two Tribes” style for the entertainment of the crowds…..

Either way, miss this ‘un at your peril. 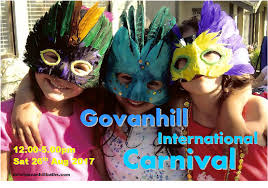