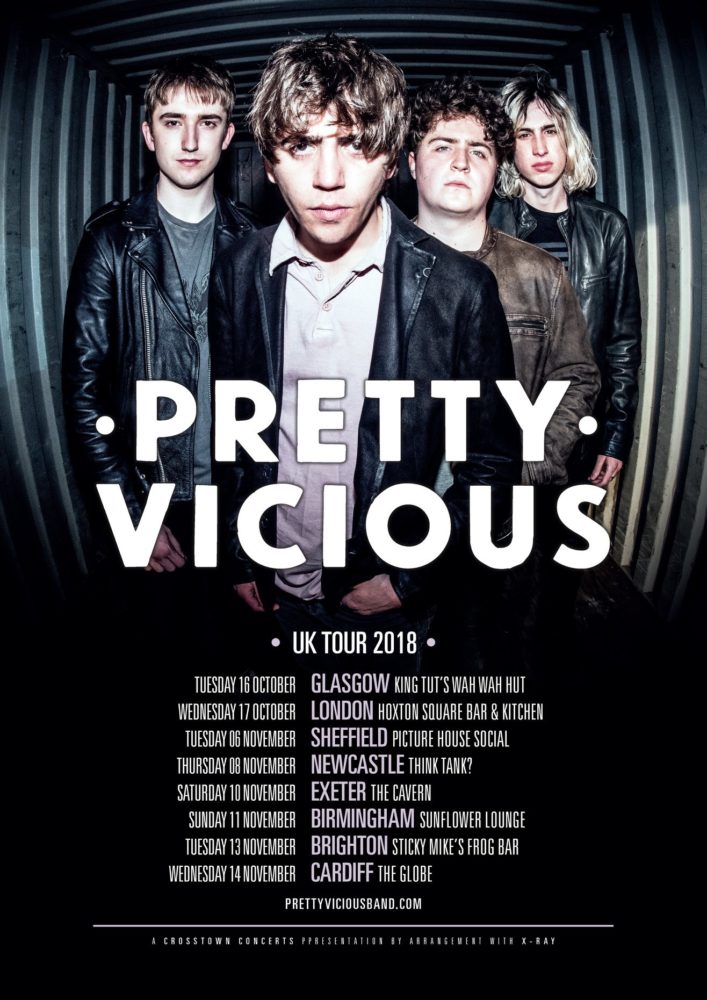 Pretty Vicious is a great name for a band.

The young firebrands came out of the Welsh valleys with a melodic touch and youthful ambition and made a great noise a couple of years ago which we embraced here at LTW. Now they are back and bolder witha big record deal and an added wisdom to their sound and signed to Big Machine Records in 2018, and their new single “Move” and “Are You Entertained” were released under the label.

They are touring the UK now – dates are on their facebook page.

Listen to new single, ‘Are You Entertained’ Here

BRAD:
The Who – Baba o’reilly
I love this song for the pure journey it takes you on and for the times it was released and delivered it pushed the boundaries on musical innovation and limits.Small Faces – Itchycoo Park
This song is my ultimate uplifter and feel good song and just makes you crave the summer anytime year round you hear it!

Queen- Your My Best Friend
Another classic feel good tune that makes you feel great and is also my favourite band I could wish I turn back time and see live!

JARVIS:
The Smiths – Bigmouth strikes again
I first heard this on a tv program ‘stars in your eyes’ some celeb was covering it, i later searched the lyrics on google and found out who ‘The Smiths’ were. They are now my favourite band
Gorillaz – Feel Good Inc
Good music to listen to when you’re getting ready to go to the pub. Impossible to be in a bad mood while this is playing.
Nirvana – Where Did You Sleep Last Night
Big fan of Nirvana and the MTV unplugged acoustic album. Everyone knows the scream at the end of the song, what a great end to a great live show.
ELLIOT:
Black Rebel Motorcycle Club – Lien On Your Dreams
•This was probably the first song I ever found myself becoming addicted to. After my brother introduced me to BRMC when I was about 12 I fell in love with them, their self-titled debut album and Baby 81 are among my favourite records ever made. The simplicity of the song is what makes it so powerful and the lyricism is captivating. The song just radiates coolness, the perfect tune to walk down the street to.
Smashing Pumpkins – Mayonaise
•From another one of my favourite, and perhaps greatest albums ever made. It’s got that dreamy feeling that chills you out completely, proper late night listening; laying on your bed on your own with headphones on sorta stuff. The vibe of the track in general is just lush.
Space Monkeys – Sugar Cane
•My favourite song from the most underrated album I’ve ever heard. What an unbelievably cool tune, I can never be in a bad mood while listening to this, it’s just not possible. The lyricism is smart and the track in general is just real fun, which is missing from a lot of music these days I feel.
TOM:
Sex Pistols – Bodies   The reason why I play guitar is because of sex pistols! Steve Jones is a genius end of discussion.
Mastodon –  Blood and thunder – I’m the metal head of the band and this was the first song I heard from Mastodon and what a mighty song it is.
Mastodon – Oblivion –  this song makes stairway look like smoke on the water!  Crack the Skye is the best rock/metal/doom album ever. Nothing comes close to this musical masterpiece.