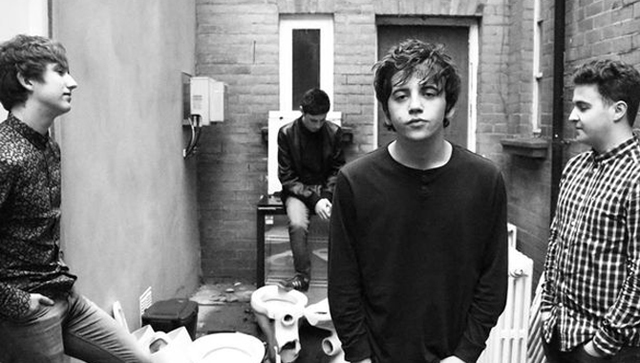 Just around the corner from Hackney Central station lies military veteran’s members club, Moth Club – and tonight it’s a venue that see’s the return of Phil Taggart’s Slacker night. The Radio 1 DJ and all round new music curator has been hosting the club night for some time now and it has seen performances from Rat Boy and Blossoms and DJ sets from the likes of Slaves.

It is Taggart’s knack for spotting new, raw and unprecedented talent that has no doubt lead to the decision of making Pretty Vicious the headliners for this Slacker instalment – their angsty and brazen breed of rock music has been turning heads for the past year or so now. Plus, with a little help from Love Ssega making his live debut, indie pop purveyors Hooton Tennis Club and pink, punk princess Girli, the night is a genre-diverse representation of some of the most stirring new bands and artists around.

Inside the East London venue the ceiling is awash with golden glitter and the stage is armed with an also golden backdrop, the word ‘MOTH’ is inscribed on it too just in case anybody forgets where they are. It’s certainly not a typical grotty gig space, but a perfect juxtaposition when paired with Pretty Vicious’ energetic and raucous sound.

Opening with the feverish It’s Always There, the band take to the stage with an undeniable confidence. Its unsurprising seeing as they’ve already had a wealth of experience supporting the likes of Nothing But Thieves and Manic Street Preachers, as well as headlining the BBC Introducing stage at Glastonbury last year. The track is relentlessly gritty with building guitars and a seamless introduction to the Welsh outfit, for anyone who may be unaware.

Cascading straight into latest single Are You Ready For Me? It’s not long before circles begin to appear in the E9 audience. Its pacing percussion is frenzied and boisterous as frontman Brad Griffiths snarls the lyrics, “We’ve waited all our lives and now’s our fucking time.”

The rest of the set is a mix of new songs and older live staples, with National Plastics receiving possibly the most wild audience reaction of the evening, complete with crowd surfer.

The final track of the evening is Cave Song. The breakthrough track has helped the quartet cement their status as rock n roll’s brightest new hopes, a position which they now continue to dominate with a summer packed full of festivals. Live the song has all the thriving aspects of the studio version, but transpires to be utterly exhilarating in this environment.

It’s this vigour and roaring enthusiasm which becomes the potential catalyst for the unfortunate amp breakage which occurs at the end of the song, forcing the band to cut their set one track short. While this was not the outcome anyone had hoped for – the crowd’s pleas for more is a testament to this – it seems Moth Club is left more than satisfied with the level of enthralling noise created by the four piece. Who said rock n roll is dead?

All words by Shannon Cotton. More writing by Shannon on Louder Than War can be found at her author’s archive. Shannon is also on Twitter as @ShannonKerry.