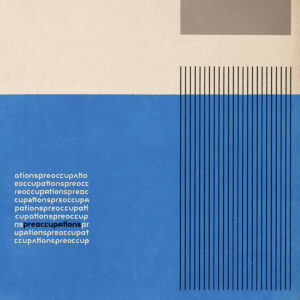 Preoccupations move past the controversy surrounding their former name through dark and dreamy post-punk on their latest. Louder Than War’s Lisa Sookraj reviews.

While a self-titled release can often signal a new beginning, Preoccupations pick up where they left off as Viet Cong on their 2015 EP. The band may have more curious eyes and ears turned their way following the controversy surrounding the band’s unintentionally provocative former name, but they didn’t crack under the pressure.

The tracks on Preoccupations possess an engaging unpredictability. The band still aims to experiment with matters of time, resonance and textured sound, atmosphere and structure – though the latter is not always necessary. The awesome transition between the first two parts on the over 11-minute long Memory functions convincingly like a DJ moving between songs for those on the dance floor – The second part of this track’s crooning vocals bring the likes of U2, Brian Ferry and Simple Minds to mind, against a Joy Division “Love will Tear us Apart” backdrop. Since these parts feel so distinct, it’s not apparent why they are fused together into one long one song, along with the third and final prolonged ambient portion of the track. This may very well have some deeper meaning however, a reflection of differing sides of the subject matter.

The band maintains their post-apocalyptic, dark post-punk sound, which both echoes the past and channels the future. There’s an initially Smithsy stride to Stimulation – breathless, frantic, frolicking. The track takes a turn to resounding reverb which creates an interactive sensation, stimulating the ears with gallactic synth merged with classic rock riffs. Fever and Monotony feature strong Bowie prowess, a hazy mysticism. Tracks like Monotony and Degraded exemplify the album’s throughline – dreamy and danceable, tracks like those new wave DJs play at goth nights today to show off and impress those on the dancefloor with their knowledge of obscure 80s artists. Between tinny beats, magical twinkles, sweeping bass and breathy vocals, the track balances gruff and pretty, light and shadow.

In many ways, Preoccupations have continued the work they started on their last EP. Though it being a bit less experimental-indie and more dark new wave, means it comes across as a bit more singular in intent. As such, it will appeal to some fans more than others. The move however, is successful and wise, since it seems the band has taken note that the tracks with a more addictive quality were those which stood out most on their last release (Silhouettes, Continental Shift and Pointless Experience). These brought listeners back time and time again, while the others were certainly interesting, they had a less intense pull. On Preoccupations, the band consistently offers sonically profound work. It translates brilliantly live, so be sure to check them out on their upcoming tour. Dates here.

Preoccupations can be found on Bandcamp – . Their official site is: preoccupationsband.com and they are also on Twitter  and Facebook.