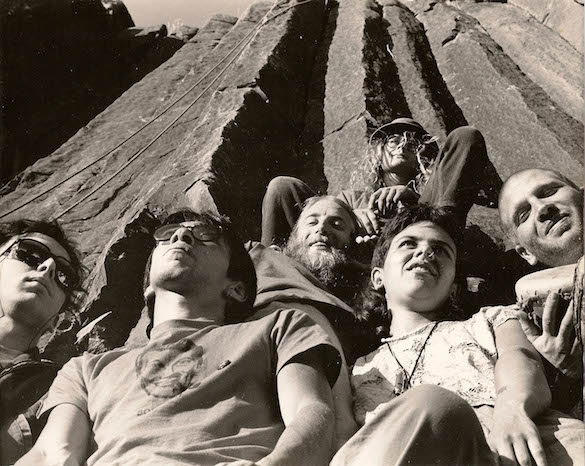 Stick Against Stone were a band from Pittsburgh, Pennsylvania who were active between 1981 and 1990. Although essentially a post-punk band, they also incorporated elements of no wave, world music, free jazz, reggae, avant-funk, rap, spoken word, ska, dub, African, and art-rock into their music. They were very much immersed in the rock-against-Reagan scene in the 80s and crossed paths with Bad Brains. They are also known to have directly influenced the Beastie Boys. They have a new album out today and to help promote it they’ve released a music video remastered / reedited from the 1985 VHS recording which the album’s been ripped from – and we’re over the moon about being able to premiere for you today. Scroll down for more info about the band and to see the video.

Stick Against Stone took funk and rock and madly deconstructed it. They embodied the rock-against-Reagan era and the whole ethos of the No Wave scene – a scene that only now are people really beginning to understand the importance of.  A long-lost 1985 VHS tape was recently re-discovered, one of the few recordings left of this cult-status band from Pittsburgh, and the music off it has been ripped and is released bearing the title The Oregon Bootleg Tapes.

“The Oregon Bootleg Tapes was recorded in the summer of 1985 at Eugene’s outdoor Saturday Market. It captures the raw energy of the five-piece Stick Against Stone collective in full mash-up mode. Sounding like a “missing link” between post-punk, funk, no wave and world music – the set is propelled by founding drummer Richard Vitale and groove-heavy bassist David Soule.”

This quote from the band’s Saxophonist / flautist Robert Shepard sums the band up best:

“We just wanted our music to be heard,” he says. “I don’t think anyone had any illusions about it. But we believed in the music, and it seemed like lots of people enjoyed it. The goal was simply to let the music take us wherever it wanted us to go. If we raised some awareness of this or that social problem, that’s great. But I think mostly we got some people to dance and listen to some good music. And on a personal level, the band members achieved the experience of a lifetime, and the friends to go with it.”

We can’t recommend this album enough. Not only is it a snapshot of a vital time in music and the world’s history but it sounds great too as it jumps across an unbelievable numbers of genres to provide the listener with a foot tapping slice of genius.