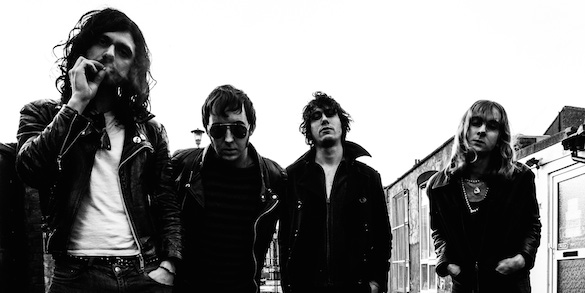 By now there’s NO EXCUSE for y’all not knowing CuT reasonably well. We’ve been rattling on about them a fair bit ((largely Keith Goldhanger to be fair), XFM have been all over them for yonks and they’ve even been receiving attention from the BBC’s fusty old homies. The band have a new single due out in a week’s time, 28th July, and two days after that they’re in session for Stave Lamacq, so it’s safe to say CuT’s star is very much in the ascendancy. Accompanying said single is a video that we’re stoked to be able to premiere for you today. So stop what and tune in / freak out to the latest joyous burst of adrenalin fuelled scuzzed up noise by CuT. Over to Keith Goldhanger to introduce…

Before the Thirteenth of March 2013, none of the people I’m going to mention below were known to a lot of us and most hadn’t even met each other.

We’d wandered into East London’s Shacklewell Arms (yes, that place again) and caught a glimpse of four scruffy long haired geezers making a glorious racket that tickled the taste buds like dirty smelly punk rock and roll has always been capable of. A few gigs followed, words were spoken and written and whilst some of us were gorging on chips at Glastonbury that year a man walked into a bar and instead of being the opening line of a lame joke, took these boys by the hands, threw them in a studio and created a piece of music that became available on yellow (glow in the dark) coloured vinyl on a label christened “Ra Ra Rok Records”.

Names? OK, everyone has names. Not always genuine ones but we can cope with that.

“…a super extended 12″ inch e.p. by the most amazing band playing in London and soon to be amazing the world with their sonic audio visual live gigs and the wonderful ability their songs have to take your mind marbles to all the corners in your shell … even those that may be a bit scary…and they are called CuT !!!”

…and then he went on to offer everyone in the room a job.

So it’s not just me and a couple of dozen others then?

This CuT “seep” (Voices Of The Void, Love, Time Traveller and T.T.I.C ) was loud, threw punches and flew around the rooms in layers of echo. It tickled the edge of the “Psych” sound (gonna have to find a better name for this soon I think) and it punched holes through the cobwebs around the listener’s ears. It’s ace and it soundtracked our nights out in East London last year. There may be some copies of this still available, then again, there may not be. 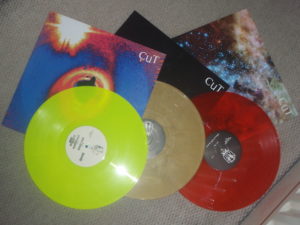 XFM DJ John Kennedy named this debut his Record of the week and many other Radio shows instantly became smitten.

CuT then went on to receive modest support from those glossy magazines that people buy in newsagents and my mate Bernard couldn’t be arsed to come along a second time which, as history has proven, shows that we’re right and Bernard as ever is wrong.

The second slab of vinyl, also on Ra Ra Rok (Time traveller, Get Me a gun, Polaroid and Tears) also received intermittent appearances on some of our favourite radio shows, more gigs and the introduction of ex- Blur manager Andy Ross who is now involved. More gigs followed, a trip abroad, more recordings and, oh, did we mention the first free download available by the band was on the aforementioned Louder than War article? … well , rewind … we have now.

Which brings us back to today … or tomorrow,, or next week or whenever your reading all this … on July 28th 2014 a Third EP on Ra Ra Rok comes out (or if you’re reading this next year, came out) … it’s a 2014 re-recording (this time produced by Creation records legend Joe Foster) of the same tune Louder Than War gave you last year (Let’s go”) and backed with “Different Traffic systems”, one of the strongest tunes on CuT’s ever expanding list of tunes thrown our way whenever we find ourselves standing in the same room as the band sound tracking our drinking habits.

We realise that some of you want this in your hands now … so here it is, on their Bandcamp: cuttheband.bandcamp.com.

AND even though it’s not Christmas yet we’re going to throw you something for your eyes in the form of the new CuT video for Let’s Go … right here, right now … exclusively premiered via Louder than war (until everyone else starts nicking the link.)

Are you ready … Ladies and Gentlemen.

This is the new CuT video, exclusive to Louder Than War

Words by Keith Goldhanger. More writing my Keith on Louder Than War can be found here. You can also find Keith on Facebook and Twitter (@HIDEOUSWHEELINV).