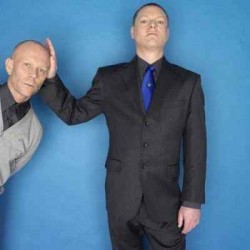 ERASURE (Andy Bell and Vince Clarke) will release the 30th anniversary deluxe edition of Wild!, the band’s fourth studio album, and have shared a previously unreleased audio version of ‘Piano Song’ recorded live in 1989 at the London Arena.

During the Wild! Tour, Erasure performed 5 sold out nights at the London Arena in Docklands and the track itself is released for the first time outside of the DVD included in From Moscow To Mars, 2016’s 13-disc anthology.

The exclusive bonus disc features five unreleased tracks including a brand new remix by Richard Norris (The Grid / Beyond The Wizard’s Sleeve), a recently discovered unreleased mix of ‘How Many Times?’, rare 12” remixes by Mark Saunders, Gareth Jones and Mute founder Daniel Miller (with Phil Legg) and cover versions (including the fan favourite ‘Supernature’). Wild! saw the band launch elaborate and unforgettable live performances, and the deluxe edition marks this by including exclusive live tracks from the London Arena performance in December 1989.

Erasure, who accepted the Icon Award at Attitude’s 2017 award ceremony, have released a staggering number of albums, including 5 UK Number 1s, and 35 UK Top 40 singles. Their recent studio album, 2017’s World Be Gone went to Number 6 in the UK Official Albums Chart, giving the enduring BRIT and Ivor Novello winning pop duo their highest album chart position since 1994’s I Say I Say I Say.