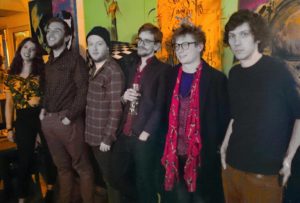 Louder than War have a special preview of the latest single from Berkshire mentalists Adam & Elvis.

When a band looks and sounds like you probably shouldn’t bring them home to meet your mum, I tend to bloody like them. Hence, Berkshire spawned ADAM &ELVIS who are a debauched five piece led by the brothers Malone – Patrick (guitar/vocals) and Tom (bass/vocals). With the aid of Juliet Styles (synths/saxophone), Steve Wraight (vocals/percussion) and Dan Robershaw (guitar) they have so far performed their gripping live shows on the same bill as Fat White Family, The Zombies and The Correspondents, as well as numerous festivals across the south of England.

‘Hanging Tree’ is their latest release and is premiered here for Louder than War. The video (shot by Balla Kingston, Craig Rogers and Antonio Pineda) captures the band at UK Live Sound studios in Reading where ‘Hanging Tree’ was produced. And it’s this immediacy to the band, via the video form, that just screams ‘this band are strange and not to be trusted!’

Anyway, back to the song itself. The gentle, almost spoken word vocals go on about “art students” are played out over a synth start. The vocals are almost out of tune and sync, but they suit the music perfectly. Female vocals come in and a nice wall of sound follows with overdubbed vocals and stabs at melodies and a “nice song”.

From the look of the band in the video, you get the impression that they all may be on day release from some safe house somewhere? This lot just don’t give a shit and i absolutely love that about them. The track gets more and more chaotic and noisy as it goes on, yet it still remains tuneful. And on second and third and subsequent listens, you realise that there is a great riff going on with this track that sticks with you long after it finishes.

It’s fun, yet dark. When they sing “be my amphetamine” it sound almost sweet. Yet it is qualified by “go to the park to hang myself from a tree”. It’s dark and this continues through to the corrosive noise that plays out at the end.

It’s not the happiest song, yet it has a buoyancy and beat that pulls you in. Lovely stuff I reckon.