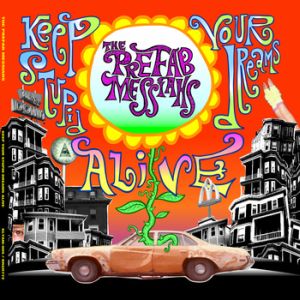 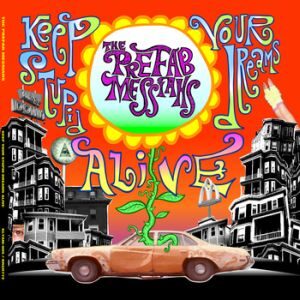 Earlier in 2013, Burger Records compiled the Devolver anthology, collecting The Prefabs’ back catalogue in a package as convenient as the drive thrus of the fast food empires whose branding logos they famously re-purposed in the 80s (but much better for you). As I had predicted and hoped, with today’s youth hungry for the non-disposable lifestyle cultures of yore and the Burger Records boom creating a renewed interest in radical rock ‘n’ roll innovators like Kim Fowley, The Prefab Messiahs have re-emerged from their cryogenic sleep chambers cosmically radiant and full of energy.

Keep Your Stupid Dreams Alive is like a cheerful explosion of bright, highly saturated colors, or the rejuvenating afterglow of a mushroom trip. It is also full of a celebratory self-awareness, tracing the band’s journey as foolhardy hopefuls with nods to their spiritual guru Bobb Trimble (Bobb’s Psychedelic Car), the rebels of local underground radio (College Radio), and Hermann Hesse’s Siddhartha (Ssydarthurr).

As amusing as it was for The Prefabs to poke fun at consumerist obsessions in the past (and the golden arch still makes an appearance on singer Xeth “Xerox” Feinberg’s album cover art), time has given them their very own enlightening lore and imagery to rely on, like Bobb Trimble’s instantly recognizable ’74 Buick art car, and donuts… Because this is a record that unabashedly embraces the outsider tribes of rock ‘n’ roll music, but appropriately focuses most of all on the tribe The Prefabs built themselves. Like the opposing emotions of Desperately Happy, their contrary nature still exists, but instead of Devolver’s uneasy corporate idolization, Keep Your Stupid Dreams Alive preaches unity through division. Weirdoz Everywhere, possibly the highlight of this new song batch, feels like a giddy declaration of the band’s victorious return, and delivers a high similar to watching The Beatles frolicking at Thornbury Playing Grounds in A Hard Day’s Night. “Here come the weirdoz, can’t count them all/Here come The Prefab Messiahs, so help us all!” Feinberg cries, and the listener is hopelessly caught up in the excitement as if liberated from musical mediocrity by some great cultish coup d’état of amiable, acid-eating beatniks.

The EP references Ravi Shankar’s eastern influences on early psychedelic rock in opener Ssydarthurr, and even Paint It Black era Rolling Stones in Orange Room, but The Prefabs are pop alchemists and their ageless secret formula is at once familiar and altogether brand new. The EP’s title track and overall theme deals with balancing the seemingly impossible weight of our wild dreams against the crushing disillusionment of boring, everyday life and advises us not to give up (“sip a cup of coffee from your daily grind/it’s a full time job not to lose your mind/you gotta do what you gotta do to survive”), because it’s most definitely a better world with weirdoz everywhere.

The Prefab Messiahs are on Facebook and Twitter. Catch them on their upcoming record release shows listed below: