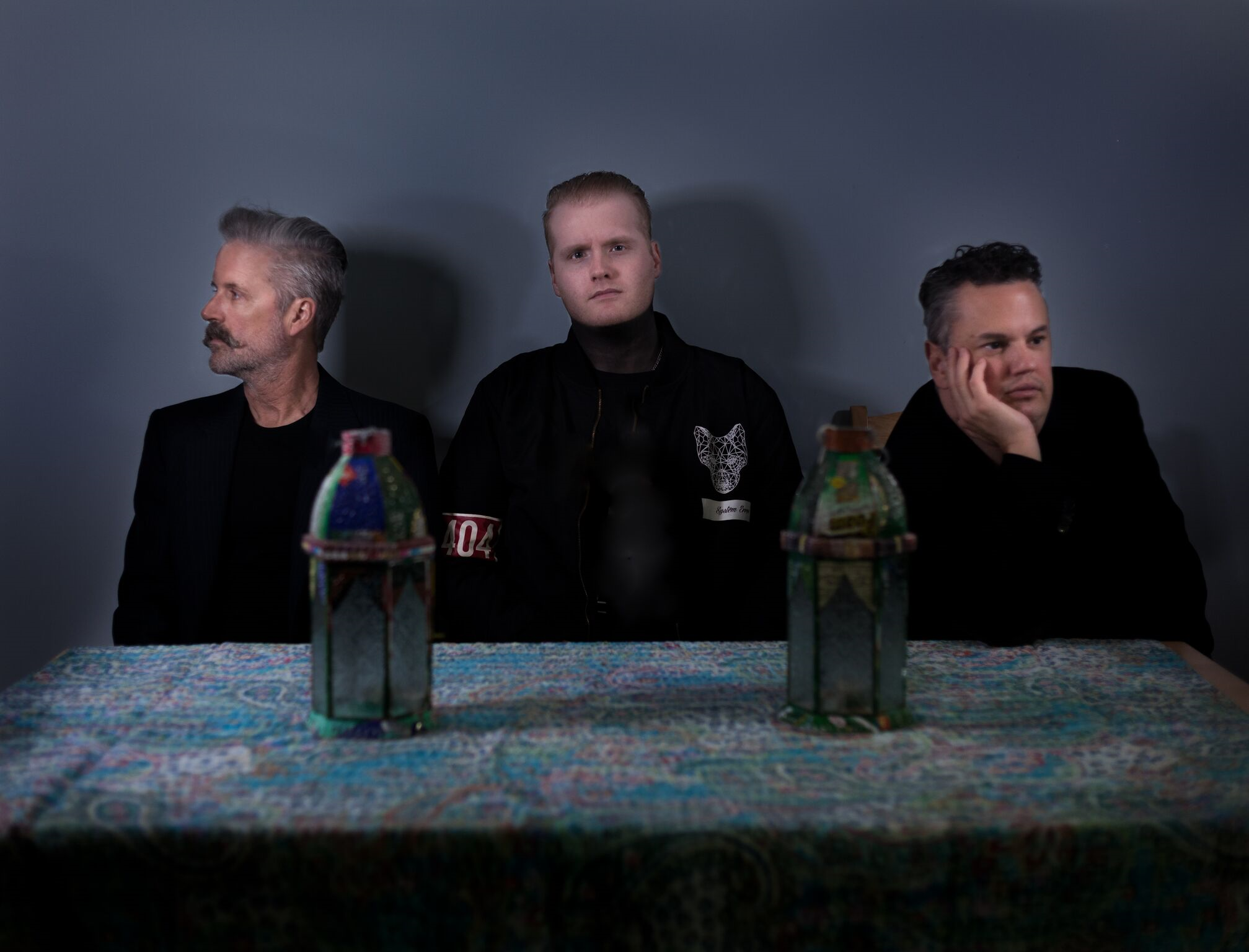 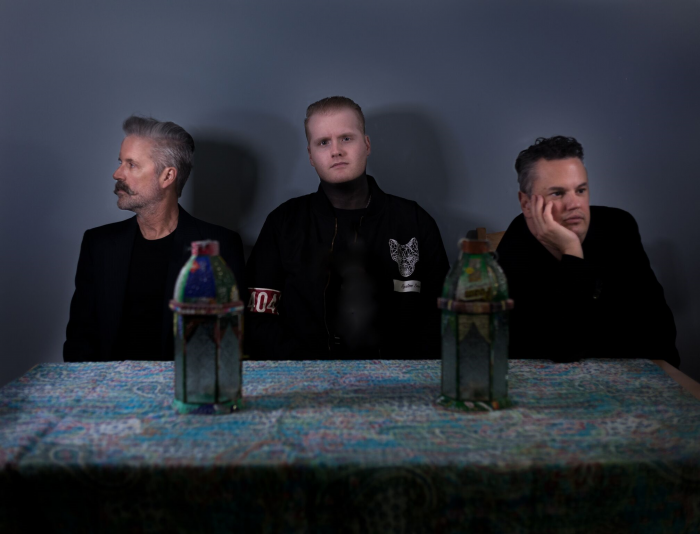 Precog are a US-based three-piece combining synthpop, darkwave and deft electronic skill to create music which seeps beyond boundaries and out of the speakers into your thoughts, says Louder Than War’s Emily Oldfield…
This is a deftly-crafted kind of sound which works at your mindset, stirring up its own spookiness, opening avenues to reflection.

For their upcoming album (Pareidolia – out 8 December), each group member has recorded their section in isolation, only coming together for the final synchronisation. A modern mayhem – or contemporary creativity? It is this sense of connection despite distance which gives the darkness of this music its own unusual sense of poignancy.

Frontman Jason Thomas – a musician and performer for over 15 years is joined by professional programmer Gerald Josef and Guitarist/Keyboardist Bret Pemelton to form Precog; a group which doesn’t just get the cogs in motion, but harnesses the most evocative and intense energies to do so.

After all, it’s a refraction in its own right of influences and genres – from the melodic tunes of Depeche Mode to the trip-hop tingling of Massive Attack – the music of Precog moulds a passion for music of the past, with a progressive pulse forward.

That progression is nowhere clearer than in their upcoming album Pareidolia – released 8 December 2017 on AnalogueTrash. You can find an EXCLUSIVE premiere of their track ‘Paler Still’ from Pareidolia below. It follows on from their early 2016 14 track release ‘Are We Lost?’ which offered melodic yet musing electropop – and now they are delving even deeper…

1)      Hello Precog! Thank you for the interview opportunity. You are described as a band in a ‘long-distance relationship’, based in different US states. Who is the band and how do you make this work?

“The Band consists of Jason Thomas (Louisville Kentucky) Gerald Josef (Nashville Tennessee) and Bret Pemelton (Ashland City Tennessee).
“More times that not, Jason will start by sending me a base to a track he is working on. From there I can basically get the feel of the track and start to hash out its direction. Sometimes it will follow its initial flow, and sometimes I’ll be inspired to go a completely different direction and strip out everything but the vocals.  This is where trust comes in, as Jason trusts that whatever changes are made are best for the band, but honestly most of the time 90% or more stays.

“I just add a ton of layers like drums, orchestration, and then arrange the track. At this point, we bring Bret in to spend some time and work out guitar parts. Bret’s talents and keen ear really know how to make the track POP and sound complete.”

2)      Would you say then that your music is more an expression of unity than isolation?

“Absolutely, despite our geographic distances, we feel like a single organism when writing. In turn we like to bring that into our music as well. We keep in contact during our writing process as well, sending samples of each track as it grows.”

3)      Your music is a real mould of genres with a synthpop edge. Why this direction and why is there still space for your music in an age where so many people can create electronic music?

“Initially we really did consider ourselves an electronic band, but as time went on we realized that, compared to many other electro bands, we didn’t quite fit the bill. We tend to use a lot of orchestral layers and are a bit more melodically driven.  This also is evident with our live shows as well.

“Where many artists trigger samples or alter drum machines patterns and filter, we actually play our keyboards and guitars and rely on little backing tracks. I think we realized very quickly in the making of Pareidolia that we really are an alt rock band with an electronic edge. Even so, there are a lot of bands very similar to us. We believe there is room for everyone to flourish and grow together.”

4)      If you could have your music playing anywhere in the world (in a venue/club etc) where would it be?

“Madison Square Garden… or Soldier Field…. KFC Yum! Center? I’m sure I am probably aiming too high – haha. I think personally, I would like to see our music played in major motion pictures or video games as well as TV.”

5)      Tell us a little about the upcoming album Pareidolia – what was the inspiration behind it?

“This is kind of a odd one. I actually came up with the name for the album after hearing a news article about people hearing a certain band tuning in-between songs during their concert, and the crowd started tweeting about how innovative it was, how it was not like their usual sound but more open and freeform. And even though it was probably a satire article, it got me thinking about how humans are desperate for order and organization in their lives.

“We look for patterns everywhere and try to connect dots where there are none in the first place. Our album does have a meaning, to each of us individually. We want our listeners to draw their own conclusions, individually to each take something away that is unique.”

6)      Would you say the new album is an answer to the question of your debut ‘Are We Lost?’ – or is that for listeners to decide?

“I actually thought about doing this haha, but no –  it’s a stand alone album. Are We Lost?  was a personal album for me about finding redemption, and fighting to win back those I’ve lost in life. Although we have tossed around the idea of doing a string of concept albums, but those would probably end up being more just instrumental albums.”

7)      Do you think a visual element is an important addition to your music – why/why not?

“Yes! I love love love the visual aspect of music and feel it is super important for all bands to take advantage of. It not only allows our listeners to put a face to our music, it also allows us to better express the song we decide to shoot.

“We have a few ideas in the works for our next shoot and can’t wait to get it out for you all. Unfortunately this is the one place where our distances from each other really begin to take an effect. Organizing a music video shoot is quite time consuming as we have to work around everyone’s schedule, find locations, figure out the lighting, find acting talent, and find a videographer.

“However, with so many mediums available at our fingertips these days, and with the insane affordability to create and execute it’s a no-brainer.  We are quite fortunate in this band to in that we are fairly self contained.  Our own recording studio, graphic designer, photographer/videographer,  we don’t have to rely on GoFund apps to finance our projects.  With video, the visual, when done well, can really capture the attention and create bonds with our audience.  We don’t take that lightly.”

8)      What are your future musical plans?
“I’m sure there aren’t many bands who chart out their next album like they were designing a building or something.  However, we are on a trajectory with Pareidolia with the addition of guitars.  We see healthy artists as those who push themselves to grow, to take their audience somewhere while not shifting gears so radically that they lose their connection with them.

“As a music lover I have felt this often with bands who sold me on their ‘Big Mac’ then on their third album try to offer me KFC (musicians just love when you compare their art to fast food).  At the end of the day it’s all about the songs.

“We have the problem of having too many songs to choose from, so that artistic muscle is constantly being exercised (knock on wood!). So hopefully this will be a trend that we will work to continue. We will constantly be doing our best to hone our sound and refine our talent so that each new track will bring something different to the table. We have taken a break for the rest of the year to focus on the release of Pareidolia and plan our next steps for live shows. We would really like to get out of the local circuit and start rolling around with some talented bands across the U.S.”