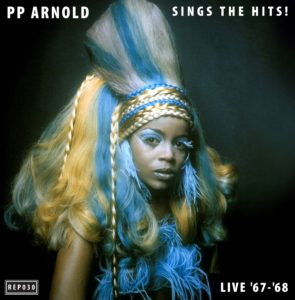 You might know PP Arnold through hearing her unmistakable vocal talents with stellar artists like The Small Faces, Primal Scream and Nick Drake. Her 1960’s solo material, mostly released via the iconic Immediate label, is expansively produced, with the same sort of production afforded to Pet Sounds, Odgens Nut Gone Flake and Revolver.

What hasn’t been heard as often are these sessions that were originally broadcast on the then primitively new radio station BBC Radio. Therefore what we have here is a 4 track session plus short interview taken from the BBC archives. Those that have fallen in love with this sort of archive release will be entranced with what has been discovered. The sound is very good, with the packaging equalling to something not too dissimilar from the Immediate back catalogue.

Cover of Cat Stevens The First Cut Is The Deepest is first up. The backing band TNT (This ‘n’ That) featuring The Creations Eddie Phillips on bass guitar are clinical in their execution of all the material here. Adding just the right balance of rock band breeding into a soul backing band. PP is uniquely soulful in her deliverance of the vocal, as always. Reaching the summits with ease, a natural vocalist mature past her youthful years here.

Interestingly backing vocals on the session are provided by soul royalty. Madeline Bell and the sultry, silky tones of Dusty Springfield put their vocals chords to the test on (If You Think You’re) Groovy. With a chorus that reaches an altogether new vocal high, the 3 diva’s past the test with flying colours. An majestic, timeless choir if ever I heard one.

(I Can’t Get No) Satisfaction is a familiar cover of the day with the scantily covered all-time great mod love song Tin Soldier. PP Arnold provided the original backing vocals to the latter. It is refreshing to hear her all-out take of the Marriott/Lane composition, capturing the same passion and pleading of the original version. It is overly pleasing to hear these 4 tracks on the release, providing another fascinating piece to the ever growing jigsaw being created by PP Arnold. Watch this space for a brand new PP Arnold album, produced by Ocean Colour Scene collaborator Steve Cradock, released later this year.