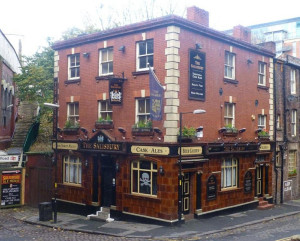 Progress is a strange thing- it seems to always to favour the few and we know who they are. favourite landmarks and popular people’s places are bulldozed down and no-one ever seem to get asked what they think- it seems like the modern city is like capitalism itself- all in favour of a few.

Last week we had the 12 Bar getting shut down by the dreaded developers and now one of Manchester’s favourite quarters is under pressure.

Southern Quarter of the city is about to go under the bulldozer with a redevelopment that is far bigger than what people though.

In the post Cornerhouse era after the famed cinema relocates to a new location all the surrounding buildings and venues and pubs are apparently being removed or renovated or whatever the buzz word is these days. Venues like Gorilla, Sound Control and pubs like the Salisbury are in danger of  being moved/knocked down by the expanding of Oxford Road station…