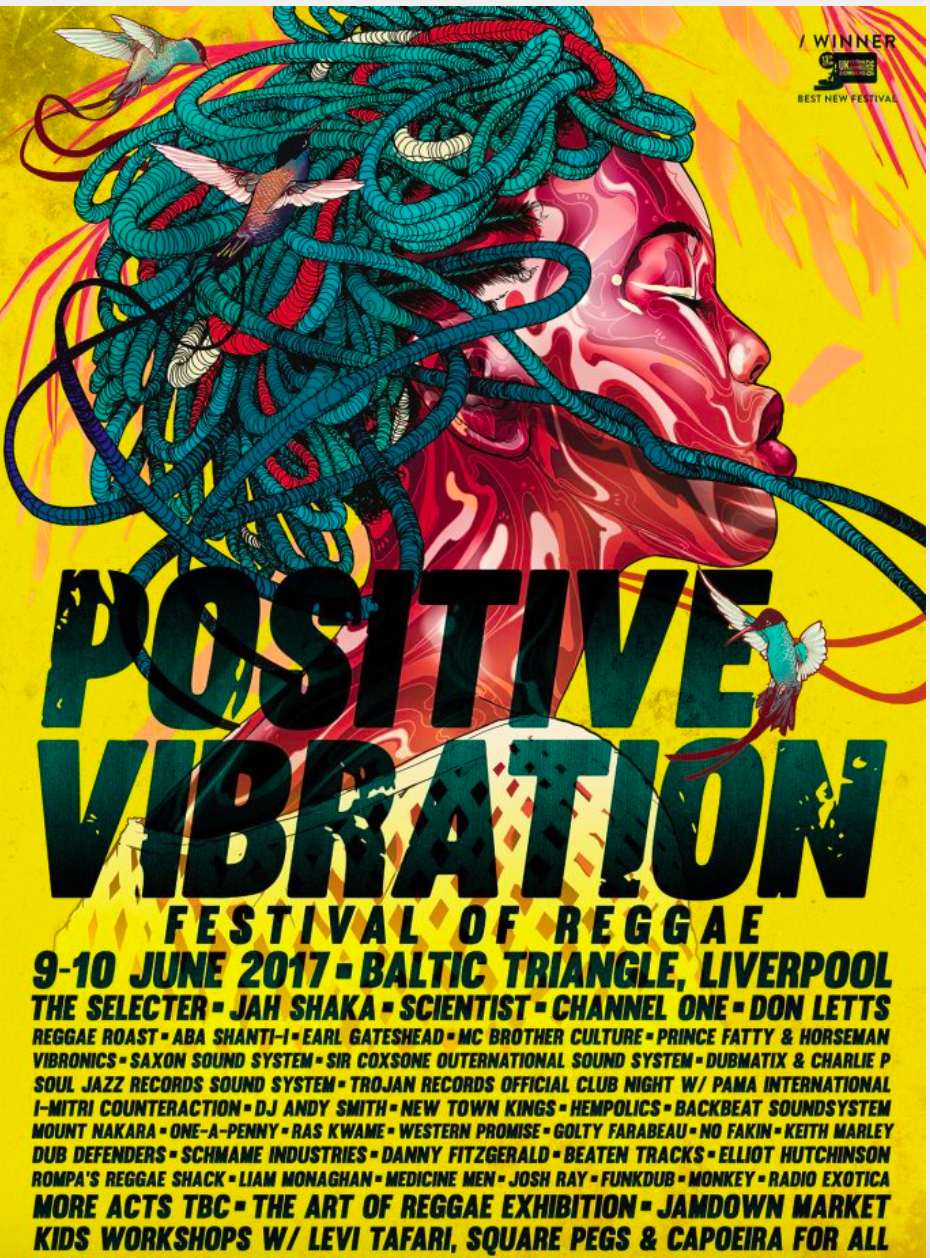 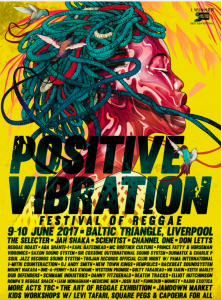 We are immersed in the converted old warehouses of Liverpool’s new booming docklands, the bass is booming and the vibes are great.

Positive Vibration Festival has taken a big step up this year and is a fully blown proper reggae festival in the heart of Liverpool and is a fantastic event – a celebration of bass culture in all its myriad of forms and sounds.

There is a street market selling excellent vegan ital food, esoteric instruments and Jamaican beach massage to flags and t shirts and venues where the whole fast moving and genius of the form is being celebrated from the Selector’s always powerful and energetic bringing of the party to dub legend Scientist raising the rafters with his still fresh and ground breaking sound decades into his career.

The festival underlines the vitality and the ground breaking genius of this music from a small Carribean island and its special bond and connection with the UK where its influence is far more than its size. In the afternoon I chair a panel with Pauline Black, Mykael Riley and Dennis Bovell to discuss just this and the three perfect guests talk about the impact this music had on them growing up in the UK in the sixties and the seventies and how it empowered them and set them off on their individual adventures from Dennis’s amazing productions with the Slits to Janet Kay brilliant disco reggae hit in the seventies Silly games which he wrote, as well as I-Roy, The Thompson Twins, Sharon Shannon, Alpha Blondy, Bananarama, The Pop Group, Fela Kuti, The Slits, Orange Juice and Madness and many others and also his collaborations with Linton Kwesi Johnson. Mikael sang with Steel Pulse in the mid seventies and then put together the Reggae Philharmonic Orchestra, who represent the most visibly black/multicultural collection of classically trained musicians in the UK and has achieved Silver, Gold and Platinum awards and contributed to four number 1 singles and seven number 1 albums via his production and writing work and is now in his current role in collecting and documenting this culture for academia and beyond and Pauline of course as the singer fromThe Selector and her erudite speaking is always a joy to hear. It’s a fascinating experience hearing these three people talk about the empowering and thrilling music and culture that has so affected them and our own culture – so much modern music is built on the foundations of this music – DJ culture, sound system, remix, the bass guitars new role, mixing techniques, rhythms, beats, space in the sound – it’s all over the place and threaded deeply into our cultural experience enriching and expanding it.

Postive Vibration is a celebration of this and every room you enter is a wold glowing with sound and possibility from the reggae legends to the local powers teaching kids dub poetry – the atmosphere is of course mellow and the vibes are good and the festival which is in its forth year is booming and looks likely to be a key weekend on the Liverpool calendar.