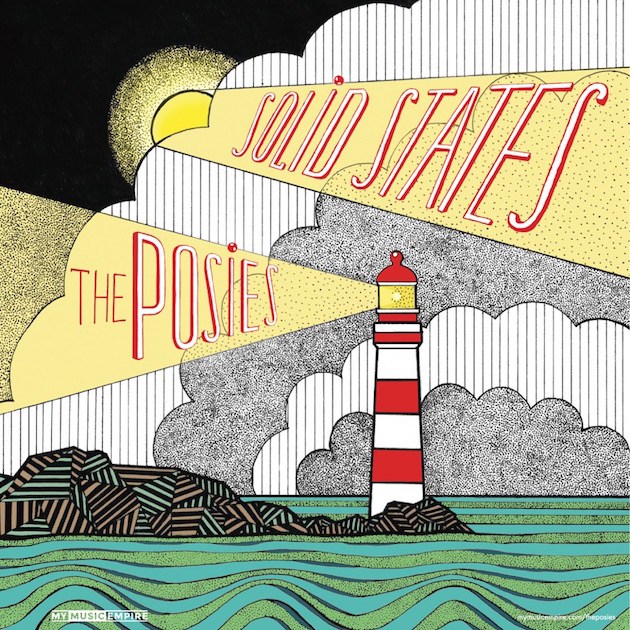 The band on the eve of its 30th anniversary (they formed in 1987) return with a new album that has the hard task of succeeding to the excellent “Blood/Candy” which was a return to form after the slightly lacklustre “Every Kind of Light”. The band have numerous side projects, Ken Stringfellow put out an excellent solo album “Danzig In The Moonlight in 2012 and a country rock concept album entitles “The Record” with singer Holly Munoz in 2015. This interspersed with their Big Star Third shows (in which Auer participates too), plus his production work for other artists explains the five year gap between “Blood/ Candy” and the new album.

“Solid States” sees the band reduced to its core duo of Ken Stringfellow and Jon Auer. Unfortunately this configuration wasn’t entirely down to choice but rather foisted on them due to the sudden death of their long time drummer Darius Minwalla last year. This traumatic event led the bands two leaders to try a new recording method, making the album in their respective home studios and communicating via the internet and bringing a new musician to play drums: Frankie Siragusa. Far from being a collection of depressing songs, the album has a cathartic side to it, reflective but celebrating life at the same time. The usual high melodic standards that the band has accustomed their listeners too are still on display. The songs twist and turn into unexpected avenues where they cross paths with those written by Alex Chilton and Andy Patridge. Both of our hosts are on top form vocally whether it Auer on the soul-pop “The Definition” or Stringfellow on the complex single “Squirrel Vs Snake”. The album has a less organic feeling “Blood/Candy” which was recorded by a full band in Paco Loco’s studio in Spain, the album offers a different side of the bands sound with a heavier emphasis on vocals and synths than on their last few releases, particularly on “M Doll”. Auer honeyed voice and his instinct for a great pop song are showcased numerous times (“Unlikely Places”, “Titanic”) but Stringfellow definitely has the upper hand when it comes to originality , his songs are full of unexpected melodic tricks and rhythm changes. The band have just finished a lengthy American tour and will be back in Europe for some shows this fall.