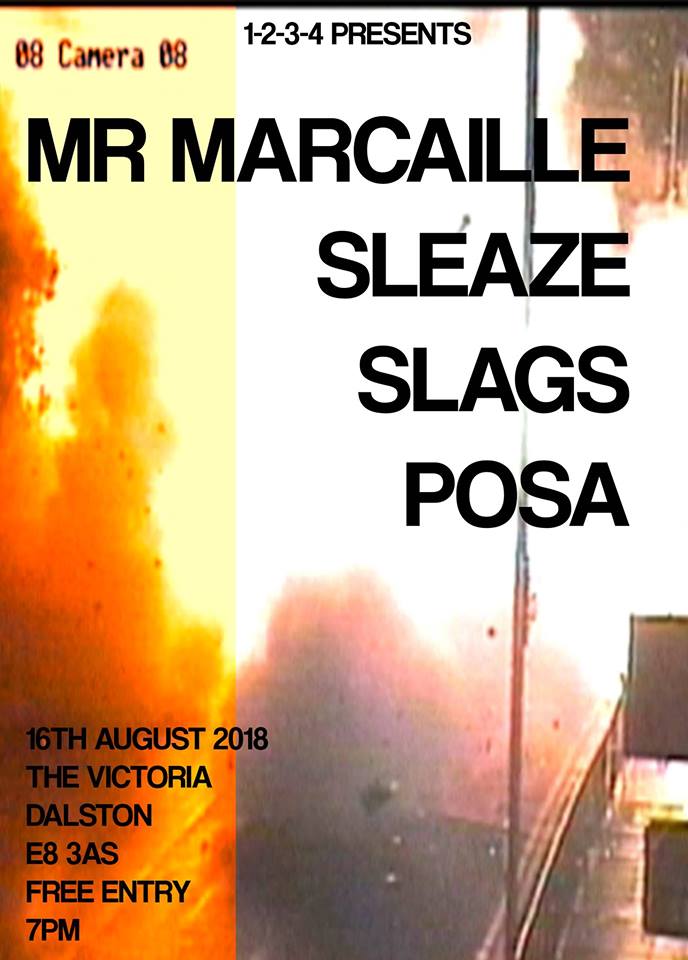 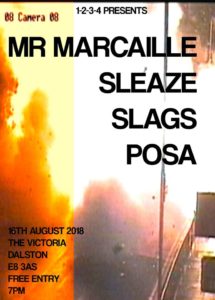 East London on a Thursday night. Four bands so fresh that we’re having to copy and paste their names from the poster to begin this review.

Keith Goldhanger attends and wonders where the rest of the world are this evening.

There are two reasons to be here this evening.

The first reason is to see POSA, a new name with a new fab debut tune that launched this week that had more than one of us here at Louder Than War ready to sharpen our pencils and investigate more. An accidental collision thanks to the benefit of the internet and a tune very well written about here .

The other tempting attraction that would confirm our attendance came about once we’d spotted that next to the ‘about’ button on the Facebook event page were the words ‘RAW AND HEAVY HARDCORE PUNK ONE-MAN BAND PLAYING CELLO AND A SET OF TWO KICK DRUMS’.
In block capitals.
This referred to headline act Mr Marcaille.

Posa sound like Fat White Family singing In My Area (The Fall) at various speeds during their half an hour early performance. At times there may be just the one note being played, some vocals that are thrown in by at least three of the five people up on the stage and they leave you with the impression that If we don’t really know what they’re doing then the people up on the stage certainly do. A few more tunes, a few more shows and a back catalogue of Swell Maps albums to digest and take notes from and these could be great in a couple of years time. It feels very early for these but the confidence and determination on show here overrides any feelings that they might just be making all this up as they go along.  Some bands just have to be seen before some wag tries to tell you this is a bunch of four year olds with a dad and some very smooth editing skills. Posa are a band with more ideas than notes they can play which is surely how we like it.
What About Long John ? is a fabulous tune, we’ve no idea if they included this in tonight’s set. At the time of our attendance we’d only heard it about twelve times and there’s no way you can get your head around this in less than thirty.
We’ll be visiting again sometime for sure.

SLAGS are also mid journey by the looks and sounds of things. They come across as a duo (Beehive hair, Drum Machine uploaded on a mobile phone, one guitar, writers of fabulous tunes about Ex boyfriends and EastEnders characters) that may just be starting to appreciate they may be pretty good.

They’re worse than 90s pop starlets Shampoo (therefore they’re better) – They’re cooler than Daphne & Celest (not difficult) and worse, which again makes them better and if they can recreate some of this in the right way once they get into a big studio then this may be the start of them really getting up peoples noses whilst simultaneously feeling the love from those of who care about quality entertainment.

‘ There’s no point being an alright snogger, if you’re you’re a shit shag… (shit bag)….’

Whatever song that might be (probably called Shit Shag we’re guessing) should be the chart busting single if you’re reading this ladies (and you may want to put me right on the correct words). They start talking to us about Janine from Eastenders and after a few anecdotes tell us that if we don’t know what they’re on about then we might as well all ‘Fuck off’.

This was fabulous entertainment that the world needs to hear.

SLEAZE is basically a bloke called Dave with an acoustic guitar and some keyboards he plays very well. No idea what the backstory is but someone told us Sleaze were a band and maybe they are maybe they just didn’t turn up apart from Dave.
Dave Sleaze as he tells us. In a pub, on a Thursday night, on his own whilst we stand and watch, clap modestly and are too polite to go next door to get another pint.

Another ordinary but intriguing night out in East London.
For free.
Witnessed by no more than thirty people who all left believing everyone should be going out more than they are.

Without the internet you’d be forgiven for thinking we’d been making all of this up.
These nights need documenting.
That’s why we’re here.