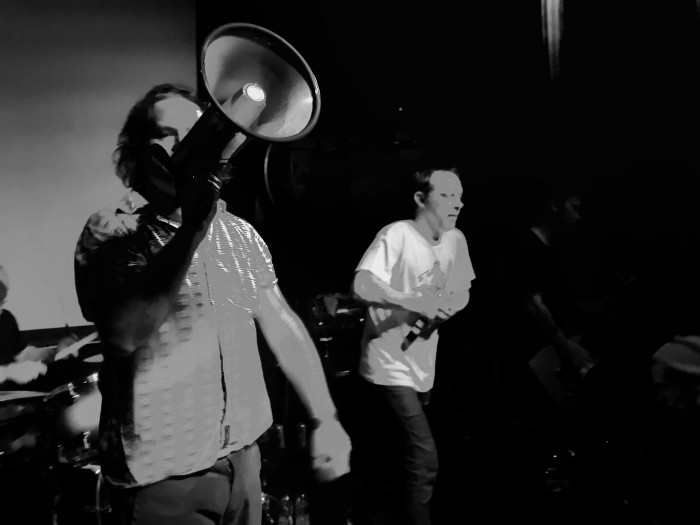 POP WILL EAT ITSELF

Last night I trekked down to London to see Pop Will Eat Itself. P.W.E.I.’s LP  ‘Box Frenzy’ barely left the platter of my turntable back in 1987. It was the West Midlands home grown equivalent to the Beastie Boy’s ‘Licensed To Ill’, a madcap, tongue-in-cheek affair with universal appeal.  Both bands then went on to create more mature credible music.

P.W.E.I or the ‘Poppies’ termed their style as ‘Grebo’, sporting partly shaved heads with dreadlocks, baggy jumpers and worn jeans. They were amongst the first wave of bands that heavily used samples from the likes of Adam Ant, Nat King Cole and Mel & Kim and so much more, which until then had mainly been the domain of rap artists. Their music is a crossover myriad of all genres. Their alternative appeal is immeasurable; it seemed to be the case that every alternative music fan loved their output. Garage rockers to Goth rockers, industrial fans, punks and indie kids alike would get their groove on to ‘There’s No Love Between Us’ and the ever popular 12” version of ‘Beaver Patrol’, carving up a space on the ever congested dance floors, dancing like mad bastards!

From conception in 1986 the Poppies music had evolved from thrash punk to hip hop, to hardcore dance and then settling on a more techno/dance/hip hop industrial sound, paving the way for The Prodigy who pretty much ran with the baton after picking up where the Poppies left off when they disbanded in 1996, leaving behind them a legacy of mighty fine anthemic hits. They briefly reformed in 2005 and split up again soon after.

P.W.E.I. mkII formed in 2011 with original member Graeme Crabb and a new line up with significant musician pedigree, featuring bassist Davey Bennett, drummer Jason Bowld from Killing Joke, Mary Byker of Gaye Bykers On Acid, and Gary Numan guitarist Tim Muddiman. Currently Pop Will Eat Itself are playing gigs in support of a brand new self released studio album ‘Anti Nasty League’ and I’ve dragged my ass down to a venue called ‘Cargo’ ‘London to see them in action.

I arrived late and witnessed the second support act of the night Rats From A Sinking Ship, much worthy of a mention and your attention. Featuring none other than the ubiquitous Alex Lusty. The band formed last winter in the city of Derby and to date have released two singles with plans to release a recorded album this August. They serve up a prodigious blend of hardcore rap and punk, a great combination especially when considered both genres were born out of 1970s New York. I particularly enjoyed their tracks ‘Rot In Hell’ and ‘No Nazi’. Lusty is a prolific artist, solo material, and a two piece band called Happy Martyr featuring none other than Morrissey’s writing partner and guitarist Boz Boorer. They even throw in a well-received Smiths cover of ‘Panic’. Check them out!

Pop Will Eat Itself enter the stage with ‘Preaching To The Perverted’ and unleash a full on stonking two-hour ear warping onslaught without a breather. It proved to be a full on sweat-fest for their powerhouse of a drummer Jason with no let up. Graham and Mary bounce around the stage like a couple of young whipersnappers, delivering three singles with mean conviction. They then proceeded to bash out a batch of the new material from ‘Anti-Nasty League’. The track ‘Watch The Witch Blow’ is a rap metal tune sounding something like the love child of ‘Clawfinger’ and ‘Rage Against The Machine. See here for yourself; https://www.youtube.com/watch?t=50&v=Y058vxfRrlQ

The verses of another new track ‘Director’s Cut’ sounded like The Clash in dub mode. Mid set Graham had a little rant about downloads and the guys went into ‘Digital Meltdown’.

Dreadlocked and heavily tattooed Davey Bennett’s bass playing is razor-sharp, it’s as if he were playing rhythm guitar, using a bank of pedals creating fat, fuzzy, distorted tones that on occasions I could feel vibrate through my bones making hits like ‘Everything’s Cool’, ‘Can You Dig It?’ and ‘Ich Bin Ein Auslander’ sparkle and throb to the max. Mary Byker bigged up ex front man Clint Mansell before kicking in to the still much relevant classic ‘Ich Bin Ein Auslander’. Mansell has since gone on to record award winning film scores.

The packed out audience of a mid thirty to early forty demographic mostly donning P.W.E.I. t-shirts were singing and dancing through every song from the front to the back where the bar is. Another splendid new track ‘21st Century English Civil War’ that mocks the EDL and all racists went down an absolute storm before leaving the stage and returning for a dynamic encore of ‘R.S.V.P’, ‘Def Con One’ ( https://www.youtube.com/watch?v=VmBcGI0MVZc ), ‘Get The Girl’ and the Prodigy’s ‘Their Law’ which the Poppies featured on. I personally would love to have heard ‘Beaver Patrol’ live again!

Louder Than War recommended this gig earlier in the week and I’m giving this recommendation a huge seal of approval. The journey home was a laborious, arduous task of road works, junction and motorway closures with diversions. Miles of twenty mph gritty tarmac less roads, then returning home to Birmingham for a meagre two hours sleep before venturing to work. Was it worth it you ask? Abso-fucking-lutely! Indie Daze at The Forum on October 3rd truly promises to be a well worthy of attending with P.W.E.I mkII on the line up.