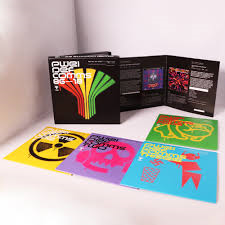 With a past labouring under the monikers Eden and Wild and Wandering (Miles Hunt later of the Wonderstuff was involved with the band at this stage), Pop Will Eat Itself renamed themselves thus in 1986, this new handle seeming to be derived from a NME article penned by David Quantick. Early on the band were very much in the fast Punk mode and they fit right in with the C86 craze – their first EP, the Poppies Say GRRrrr! arrived in a plain brown paper bag and delivered five songs in around seven minutes, with pronounced Buzzcocks undertones.

Theresapsychopathin My Soup, featured here, was a good example of the twisted but tuneful Punk Rock they were playing at the time. The Poppiecock EP, where the band moved from their own Desperate Records to the larger indie Chapter 22, followed on in much the same style. Oh Grebo I Think I Love You (re-recorded version here) on this record led them to being tied in with the brief music paper fad, Grebo being a long-haired, greasy 70s Rocker, gaining entry into the 80s via the Gaye Bykers, Crazyhead etc.

The success of the Def Jam artists Public Enemy and particularly the Beastie Boys seemed to have a strong bearing on the way the band developed at this crucial stage – away from their Punk Pop roots and brief dalliance with Grebo, more towards Hip Hop and dance beats. At this time Graham Crabb came out from behind the drum kit and became the band’s co-lead singer. Their debut LP Box Frenzy, which emerged in the Autumn of 1987, revealed the change in stance with a few glances back to their recent past. Though still a work in progress it was an enjoyable melding of the two styles, with a beats-crazy version of the Wilde Knights’ Garage Punk nugget Beaver Patrol being a really good example of the “new” PWEI and Grebo Guru’s blasts of cool energy were smart enough too. Soon major labels were sniffing around and the band jumped from Chapter 22 to RCA.

By the time of This Is The Day…This Is The Hour…This Is This! arrived in 1989, Pop Will Eat Itself were now fully immersed in Dance Culture and state of the art production techniques. Sometimes it did feel like they were trying a little too hard (on Can U Dig It, for example), but on the whole they managed to squeeze a few new wrinkles out with enough techno trickery to keep things relatively fresh. They also instilled their raps with their own, more often than not humourous, slant.

It wouldn’t be totally off beam to suggest that the Poppies put in some of the groundwork for people like the Prodigy to go from years later. In 1990 they were featuring a similar mix of traditional instrumentation, samples and beats. Def Con One 1989AD is a key track here, one that was as good as anyone in the UK managed at this time, a winning combination of the Funky Town melody, the Stooges’ No Fun and their own unique drive. Shrieking and dynamic electronics power along Satellite Ecstatica nicely and the single Wise Up Sucker is one of their better concoctions, somehow missing out on the Top 40 despite some wizard guitar and an ultra-catchy hook line.

By the time we reach disc 2 of this boxset the Poppies were at the zenith of their popularity, scoring a Top 10 hit in Get The Girl! Kill The Baddies! (presented in a nice Adrian Sherwood 7″ mix here) among many other charting records. House had started to become big news and not ones to be left out, PWEI cut their Italia 90 record Touched By The Hand Of Cicciolina, with a touch of that piano sound that was everywhere at the time. Aside from their more upbeat shoutalong Hip Hop they also proffered some nice proto-Electronica on Psychosexual with near-whispered vocals and a laidback vibe. They even manage to re-tool Elvis for the B-Boys on Rockahula Baby! Another Man’s Rhubarb is also in that style, heaven knows what the lyrics are about, but it has a nice feel to it.

Though people has ruminated in the past on the transitory nature of Dance Music, disc 3’s opening track Ich Bin Ein Auslander could have been minted today, fresh in its musical approach and lyrically could easily be talking about the current state of affairs. Thrilling and thought-provoking, it also was the lead off track of their final album with this line up Dos Dedos Mis Amigos. They continued the move towards an Industrial Dance base with this record, issued on Trent Reznor’s record label. Although the band split afterwards there is little sign of discontent – you just couldn’t keep these fellows down, with some spacey samples on the anti-Royal Familus Horribilus enlivening the fast rap of the song and an odd cover of Peter Gabriel’s Games Without Frontiers sporting a slow rhythm and effectively creepy atmosphere.

Pop Will Eat Itself split in 1996, but made a series of well-received live comebacks in the early part of the 21st century. A whole new line-up convened around original member Graham Crabb in 2010, including Mary Byker of Grebo fellow travellers Gaye Bykers On Acid. Recordings by this new PWEI make up the last half of disc 3. Overall they evoke Pop Will Eat Itself’s core values, with Chaos And Mayhem being a straight Rock song that could have come from their days back in 86/87 and the football song Reclaim The Game having a great chant/chorus.

Finally we arrive at the hook for the PWEI collector, a whole disc of remixes and rarities. The 12 inch take of PWEI-Zation catches the ear with lots going on, Police sirens, beats, samples and shouts, all adding up to a frantic but great slab of noise. Get The Girl features as another Sherwood mix and appropriately has a smooth Reggae feel and Old Skool Cool is a bright House/techno instrumental piece. We take our leave from the Poppies with the pacey electrobeat of Eyes Wide Open, the sparser, less worked-on feel benefiting the track.

Def Comms 86-18 is a great box for the casually interested like myself, who liked what PWEI did but did not delve into things too far. Also for the more committed fan it has some rare stuff tucked away on disc 4 that will prove of interest. To their great credit Pop Will Eat Itself never stopped progressing, all the time taking on new forms of music and twisting them to their own peculiar ends.

There is a lot of their stuff on here and a good amount has weathered rather well. The newer tracks have merit and show some promise too, demonstrating that the Poppies’ story is not quite over yet. This box also kind of works as a potted underground history of the shifts in UK music from pre-Madchester to Brit Pop times. Well worth a second listen if you previous wrote Pop Will Eat Itself as mere dilettante trend-hoppers, because there was a sound method to their madness. They certainly knew how to construct a good groove, keeping things interesting and fresh, employing rhythms that were infectious and danceable married to strong songs. A very listenable and invigorating selection.