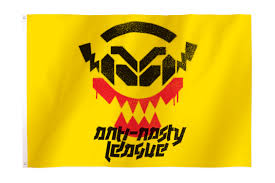 POP WILL EAT ITSELF
Anti Nasty League
album
short review and interview
9/10
A couple of weeks ago I visited London and witnessed P.W.E.I. play to an up for it, filled to capacity crowd of loyal t-shirt wearing, dancing fans. They played a cohering combination of old and new material from their latest offering ‘Anti – Nasty League’. On hearing the new material, I felt duty-bound to hear the new album in it’s entirety. It’s a bit of an ear pleaser!
‘Anti Nasty League’ is the second album from the latest P.W.E.I line up that formed in 2011 with original member Graham Crabb, serving the P.W.E.I brand proud. It’s an album that’s brimming with vitality. Many of the verses are rapped over thick driving bass riffs that rip into stimulating metal guitar licks fused with instantaneous catchy choruses.
In a short interview with front-man Graham Crabb said to me that it took over two years to complete. The recording was set up remotely as the band members were here, there and everywhere, out touring with different bands. They set up an online server in which all members sent files back and forth to each other’s houses.
I asked Graham which were his own particular favourites on the album. He replied; “English Civil War because it became a perfect successor to ‘Ich Bin Ein Aulander’, same type of vein and it had that sort of heaviness with strings too”.
Graham is also very fond of the track ‘They Can’t Take (What You Won’t Let Them Have)’; he said “It took him by surprise, as he didn’t know how it would end up. It sounds raw and Ruts-ish even”. Another one he likes is ‘Set Sail For Death’ as it’s a bit different with a slower vibe. He likes the way it meanders, “Everything’s just relentless and keeps worming it’s way into your head”. I intervened at this point and pointed out that the whole album does this and the fact it’s instant and consistent from beginning to end. It’s usually the case that most albums require a few plays for it to grow on you, for it to then remain in your psyche. I asked Graham if this had been intentional. He answered, “We had the luxury of selecting twelve from around thirty songs. It allowed for a lot of quality control. If you’re up against a clock in the writing process it might be the case of picking twelve tracks from thirteen or fourteen”.
I mentioned one of my particular favourites is ‘Watch The Witch Blow’,  I previously described this as sounding like the love child of the bands Clawfinger and Rage Against The Machine. He said, “The track is about the swell and uprising of people who have had enough of politicians and Westminster. Not just in the UK, across the world, the Arab spring and various revolutions. It was just another way of saying it’s all gonna blow and things are going to kick off!”
Graham Crabb wanted the main point to focus is that they refuse to sell digital downloads of the album. Releasing physical copies only! They are not shunning the mechanics of digital totally as you get a download by purchasing a physical copy. Graham explains that they do not like the music industry selling digital downloads and that the streaming of music also plays a part of the problem. This brought me on to the subject matter of the album track entitled ‘Digital Meltdown’. Graham said it’s the most typical Pop Will Eat Itself and that the band is against people cherry picking their favourite songs from albums on line instead of purchasing the whole package. I totally agreed with him, it totally compromises the whole music industry. Another noteworthy point Graham mentioned was about not getting the full artwork with downloads. “Designers Republic have been doing brilliant artwork for PWEI for years and putting something out without the artwork goes against the history of the band, it’s integral to what we do now”.
Anti Nasty League is self released and is available from this link https://shop.popwilleatitself.net/collections/anti-nasty-league