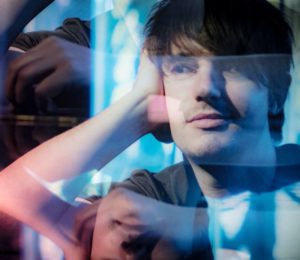 Pop Crisis is a new project from The Leisure Society’s multi-instrumentalist and producer Christian Hardy. Together with bass player Jon Cox and drummer Sebastian Hankins, the three have recorded three EPs all set for release through 2017. And as the name of the band suggests, the music they have created is bourne out of insecurity and loss, but brought together by experimentation and unity.

After some early outings as a solo performer (featuring in the ABC television drama Brothers & Sisters, performing with Amanda Palmer, touring with Peter, Bjorn & John), Hardy didn’t share any of his own music for a long time.  As co-producer and on-stage foil to The Leisure Society’s frontman Nick Hemming, he was enjoying creative and critical success (two Ivor Novello nominations, iTunes album of the year, Rough Trade Album of the Year, collaboration with Ray Davies, love from Brian Eno), but as a performer in his own right, he’d suffered a fairly seismic crisis of confidence.

Then the death of a very close relative made Hardy reassess life and the creative process and out of it Pop Crisis was born. And this rawness is ever present, from the beginning of the sparse piano arrangement, to the name of the track. But, before you get the wrong idea, this track is actually full of hope, a positive outlook and a cheeky grin.

From the opening minimal piano chords and the high in the mix vocals, you get a sense of drama and honesty from Hardy. Minimal percussion join in to complement the clever wordplay until drums and bass collide with vocal overdubs. This is when the sound gets ramped up and the band comes into their own. Harmonies and Suede-esque vocals and chord changes take the track into a different sphere. And as soon as the crescendo is at it’s peak and the track is coming into it’s own, the noise subsides to the lowly piano and naked vocals and lyrics.

At times it has both Rufus Wainwright and solo Thom Yorke influences and then it breaks into the aforementioned Suede-esque swagger. I loved it. My only criticism? It’s too short! The drama of the build up to the middle section and it’s gorgeous abandon could go on and on if I had my way. It’s an impressive debut and this lot hold a LOT of promise.

Pop Crisis can be found on their Soundcloud.