Home News Polyfest is this weekend – full details of festival celebrating the late... 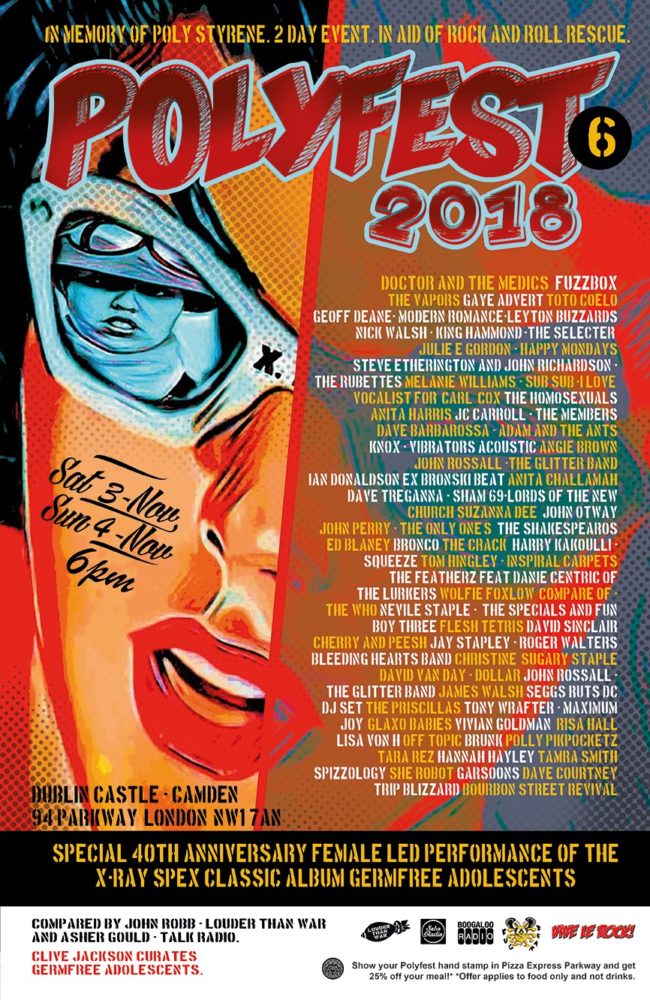 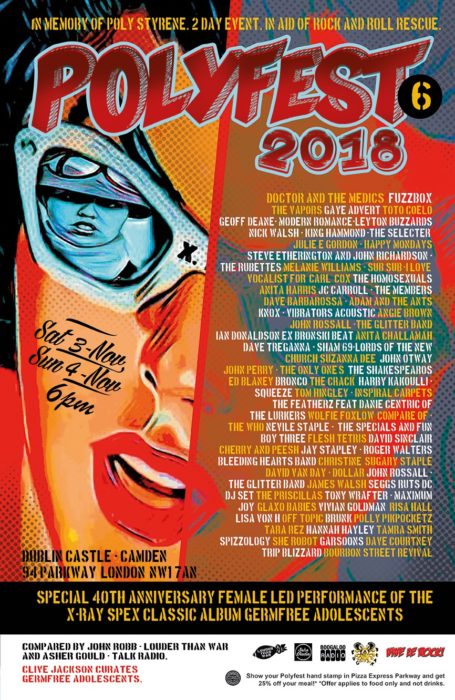 Laura Beth speaks to Mike Bennett about POLYFEST 6 at the Dublin Castle on the 4th & 5th of November.

PolyFest has been rocking along for six years celebrating the life and times of the late, great Poly Styrene of the iconic punk band X-Ray Spex. However an indignant and pedantic Mike Bennett (Ian Brown, The Fall, Gregory Isaacs) disputes the punk tag.

Q: So Mike you’ve been curating the festival that celebrates the punk icon Poly Styrene for 6 years, the acts are getting bigger but the venue remains small, why is this?

A: Give me a break, I’m not a promoter and never have been! It started off as an almost private celebration for die-hard fans at the Half-Moon in Putney and characters such as Tony Gleed from Boogaloo Radio and Dublin Castle just keep it chugging away. I would have no experience in putting on big gigs and its better that we have a weekend full of packed audiences than a half empty Bloomsbury theatre. They are still knocking at the door along with the Roundhouse – both amazing venues with great people at the helm, but we wish to keep it in the hope and anchor spirit of things. That was a comparable venue to Dublin Castle. Incidentally I don’t want to marginalise the work of Poly Styrene as pure Punk, that word was a convenient way of putting people in boxes, like a conveyor belt mentality. New Wave was a more expansive phrase, groups as diverse as Television, The Psychedelic Furs, Magazine, Richard Hell and The Plasmatics step badly into this territory. In other words not stereotypical Punk! Poly Styrene’s words and her bands use of saxophones and synthesisers was way too imaginative to be pigeon-holed into such a minuscule method of thinking.

Q: Can you expand on why you think Poly was so individual?

A: Of course I can, I know her catalogue inside-out! Check out the track ‘Genetic Engineering’, its prophetic to say the least. She literally pinpoints stuff that has now happened in stem-cell cloning decades before it happened. ‘Plastic Bag’ tackles consumerism in a completely surreal way and ‘Germfree Adolescents’ is all about OCD amongst teenagers with growing pains. The song is inadvertently sexy but not sexualised, across the board she namecheck brands such as Weetabix, Woolworths, Listerene, Kleenex and other household names. She was playfully sending these people up in a playful but subversive way.

Q: Would you say Poly’s aesthetic image was Punk?

A: Certainly not! Ok I’ll retract a little bit – the ethos was Punk in that it was put together from pieces of bric-a-brac, in that she came up with the iconic band logo with a felt-tip pen. However the fact that she liberated disenfranchised girls who has braces on their teeth was borderline genius, she made braces cool! Also her use of deconstructed war attire to make an anti-war statement was splendid, with all due respect it was not like certain punks wearing razorblades and Kings Road mohawks with bondage garb claiming to be original. As Poly put it herself – in a song we all know and love – ‘Oh Bondage! Up Yours!’, oh and the track ‘I’m A Cliche’ highlights Poly as the Queen of self-deprecation. It’s no wonder they’ve chosen this as the title of the new movie based on this evergreen icon.

Q: So what surprises are there in store for this years PolyFest?

A: First and foremost, we have an all female cast version of the opus album ‘Germfree Adolescents’ as in sequence as humanly possible. We’ve got the incredible Fuzzbox pounding out tracks such as ‘Identity’ and ‘Warrior In Woolworths’, on the other end of the spectrum we’ve got bubblegum girl-bandTotocoelo doing tracks like ‘Age’ and tinsel backdrop, talk of the town icon Anita Harris performing ‘I Live Off You’ in a post modernist baccarat setting, with a hint of The Carpenters for good measure – so very little punk there. Then we have The Rubettes featuring Steve Etherington backing Julie E. Gordon whose dulcet tones have augmented The Happy Mondays for many years, performing an electronic version of ‘Genetic Engineering’ proving once and for all that a good song can be put out there in all kinds of idioms. Another brilliant female star is of course the legendary Melanie Williams who will be performing material from ‘Germfree Adolescents’, their second album ‘Conscious Consumer’ and Poly’s fun, vegetarian related track ‘I Love My Sneakers’. This is something Melanie relates to a lot and its not about preaching, thats what I like about the lyrics of Poly. Her lyrics and her pentatonic nursery rhymes were child-like but never childish. They were simplistic but never simple. To that end her work always reminded me of the late, great Syd Barrett. How ironic is it that a glut of well known new wave and punk artists tried head-hunting him for production duties, like Poly her was an auteur and sonic engineer. Youth managed to capture all of these qualities on her critically acclaimed album ‘Generation Indigo’. My favourite track of that album being ‘Virtual Boyfriend’ by the way, rumour has it that its going to be covered by one of the new bands playing the festival. Its important that new bands are given a platform alongside the likes of Dexy’s Midnight Runners, The Ruts, DC, Tom Hingley of Inspiral Carpets, Neville Staples of The Specials, John Otway and many more. My tips for brilliant new artists include, Bronco, Henge, Cherry & Peesh and particularly Garsoons who mix the vibe of 13th Floor Elevators with reverb soaked psychedelia. Henge are a bunch of magnificent aliens and are being teleported in on a cinematic screen. Trip Blizzard have got a few surprises in store as well. Tara Rez is also one to watch and I’m looking forward to JC Carroll of The Members, Jay Staplee who played with Mike Oldfield and Rodger Waters’ Bleeding Hearts Band and Suede. Oh and also The Only Ones’ John Perry, that guy has legacy.

Getting fuzzy with Vix of Fuzzbox

Q: Whats this art exhibition that Gaye Advert is curating?

A: That is very much Tony Gleed’s baby, ironically I met Gaye when my play was in the West End starring Doctor & The Medics, she is a really nice lady who still looks about 24 years old! She was the first lady of punk and new wave and Joan Jett surely owes a debt of gratitude to that iconic look. I’ve seen her art and its rather magnificent. By the way, speaking of Doctor & The Medics, like Youth, the reverent Dr. Clive Jackson has been there from the start, the crowd go absolutely ballistic when he cranks up the energy in his glam tinged ‘Sprit In The Sky’. He is an honorary headliner every year. I’ve been on a 7-hour road trip with him and he has ‘Germ-Free Adolescents’ on rotation, his passion for Poly is the perfect potion – if you’ll excuse my unrehearsed alliteration!