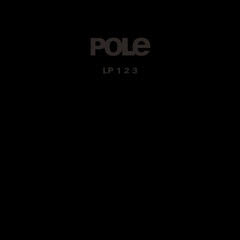 Between 1998 to 2000 Stefan Betke would create three albums that were born out breakage (a Waldorf 4-Pole filter in this case…hence the name Pole) and what morphed in to seminal beauty. Now given the remastered treatment, Betke’s Pole albums, named simply 1, 2 and 3, are ripe for rediscovery and reappraisal. Those who already know these albums can reconnect with their level of intimacy and drama thanks to a fuller and richer sound whilst those new to them will get the instant realisation that they are hearing seminal trips into minimalist techno, dub and reggae…they will also hear the roots of more current artists who also walk in the dark and static with their muse.

The importance of these albums cannot be understated with their echoes heard throughout the worlds of dubstep and pop and to listen to them in their entirety from 1-3 is an experience any music lover should go through as they allow you moments of introspection and tranquility mixed with the odd flushes of beat driven movement which feels totally unique and whilst there are faint echoes of well-known genres these albums are wholly original in tone and emotion. Just listen to the way the more techno-leaning 1 morphs in to the more reggae tinged 2 before Betke takes us deeper in to the world of dub on 3. The transitions between the three albums are so well done that you are gently nudged towards new directions instead of dragged sharply.

One of the main aspects of the trilogy is Betke’s use of space and minimalism in his work. As we go through the albums we are kept centered by the familiar hiss and crackle yet around it everything blurs and contorts and listening to these albums feels psychedelic and surreal with a mixture of the comforting and the edgy. Like swimming alone in the sea at night there is that dangerous edge to these albums but also the thrill of the illicit and the sense of you, the listener, being part of something a lot bigger than yourself and your ego. The space around the edges and what is left out is just as important as the music Betke leaves in and depending on your state of mind when hearing these albums, the space can be warm and enticing or dark and insidious. In leaving out any sharp edges Betke locates his music in its own world with no borders.

Pole’s trilogy is as exciting and influential as many a more celebrated run-of-three albums in recorded music which the closest similarities this writer can find is the celebrated Scott Walker trilogy also called 1, 2 & 3. What links these albums together is that both Walker and Betke took elements of heavily genre based music, broke them up and relaid them down with a touch of their own genius creating a form of music that had one foot in the familiar and another in the brand new.

These three albums are essential and now that they have been remastered their power is even more potent. You need these albums not just for their musical content but for the inspiration they can create and the knowledge that even out of damaged and broken times..beauty and a wonderful new can emerge.