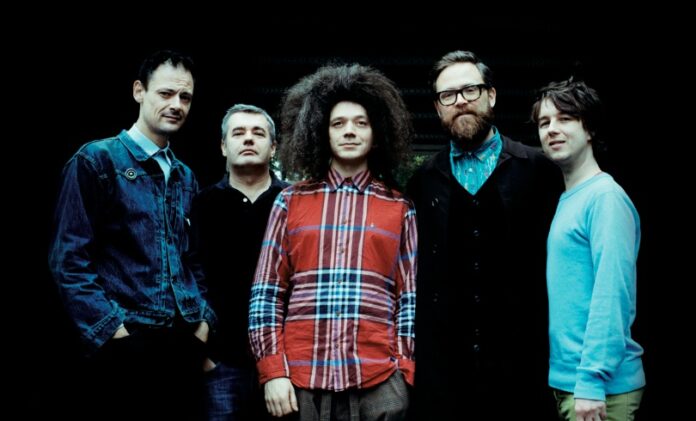 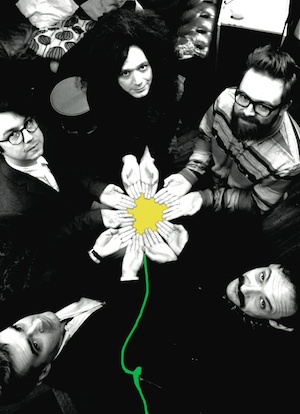 Seb Rochford’s cheeky glitch jazz critters have sashayed into London as part of a jaunt to promote their fifth long-player, In Each And Every One. Coming four years after previous album Peepers, it sees the band stretching out and exploring a sparser, more cosmic sound, Rochford’s drums melding even more closely with Leafcutter John’s rugged beats and noises this time around, while the twin saxophones of Mark Lockheart and Pete Wareham carve delicate, bluesy trails across each of the 11 tracks’ dusty textures.

The last time I saw the band, in a one-off show a couple of years ago, the mix of jazz and electronics still felt like a work in progress. The band never seemed to cut loose, hemmed in by the fidgets and glitches rather than using them as a platform for deeper exploration.

However, the deeper grooves of In Each And Every One offer up a more enticing prospect for tonight’s show. A nod to techno here, to dub there, with a whiff of Malian polyrhythms – a result of Rochford’s time with Rokia Traore during sessions for her Beautiful Africa album perhaps – all of which complement the horns and beats perfectly.

The people of east London must think so too, because the sweaty basement of XOYO is packed tonight. There are yer archetypical hipsters of course, beards and glasses at the ready, as well as older jazz heads plus a loved up couple who are, as Funkadelic once said, standing on the edge of getting it on. There are even two younglings comparing albums by The Smiths on their smartphones.

I’m just about to explain to them that Meat Is Murder is the pick of a discography swollen with gems when Rochford and co emerge, coaxing a hypnotic, brooding jam from their instruments that combines album opener Open See with a dubby excerpt from the band’s vinyl only Black & White EP. (“I liked the idea of making something that wasn’t available on the internet at all,” explained Rochford in a pause between tracks later on.)

Finishing with a beautiful, lyrical sax lick played in unison by Lockheart and Wareham, the intense, heavy-lidded mood defines the tone for the rest of the set. They’re all Ks and Qs Lucien shifts and shimmies all over the place, an African shuffle replaced by a panel-beating clamour, all nailed down by Tom Herbert’s stubborn bass. Be Free is sweaty, claustrophobic funk, with Lockheart and Wareham playing clipped, uptight sax. They seem be playing loops, even as Leafcutter John’s electronic incursions become more grainy and organic.

By the second half of the set, individual tracks and instruments seem to melt into a shifting, pulsing blur, the band in some outer zone. Life And Life builds from a grainy cloud of static to channel some long-forgotten private press spiritual jazz ecstasy, while the two parts of Lost In Death are … well, basically they’re really out there, circling round from blues to noise and back again.

But we’re with them all the way though, our faces forward, our hips swaying, no snogging, iPhones firmly stashed in our man-bags. By the final salvo of Maliana with its melting, bowed bass and the blocky clumps and middle eastern-inflected melodies of Sometimes, I kind of feel like we’re all in a different place, out near the perimeter where there are no stars and we are stoned, immaculate.