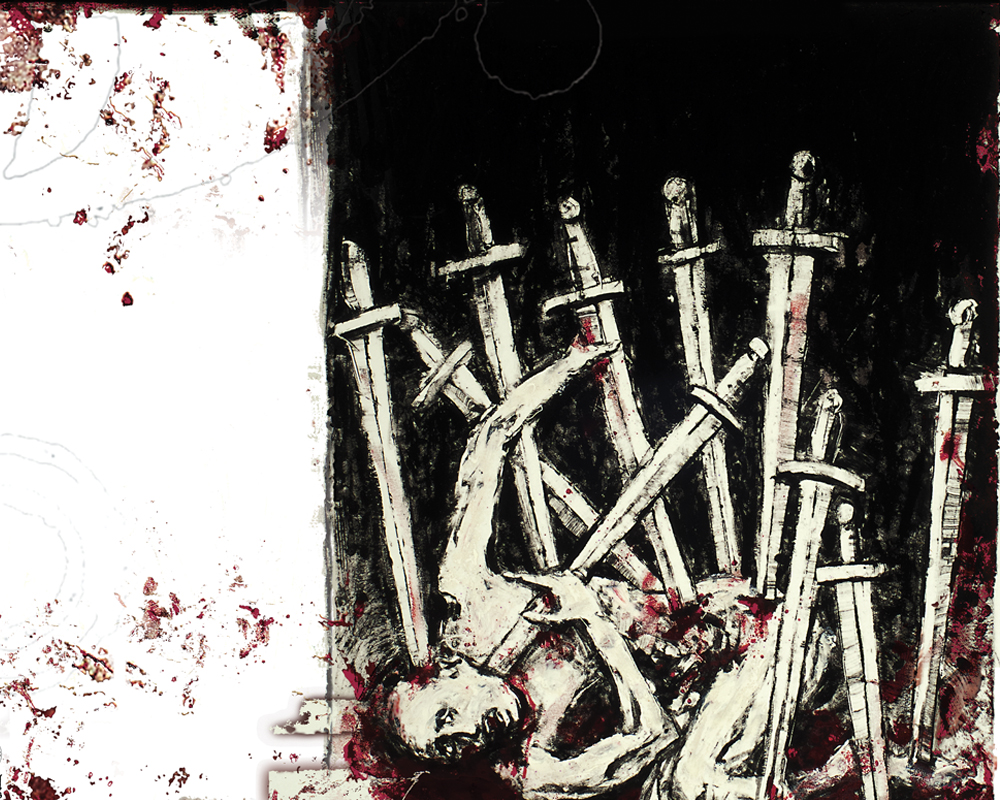 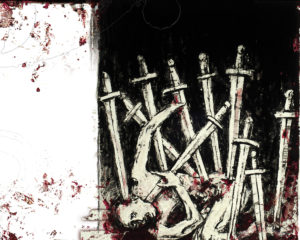 These doom-laden bass and synth bangers will give all but the toughest listeners the heebie-jeebies, says Louder Than War’s Paul Margree.

Looming up out of the frozen wastes like a daemon General at the head a vast undead army comes The Poisoned Glass. With 10 Swords, doom metal veterans G. Stuart Dahlquist and Edgemont Martin, aka Edgy59 – both of whom cut their fangs in the legendary mould-breakers Burning Witch, then infected a panoply of projects with their scurrilous energy before recombining for this latest venture – have carved out an obsidian monolith of a record that is as shamelessly overpowering as it is original in its execution.

Eschewing guitars and drums almost entirely for a set of compositions driven by Dahlquist’s immense bass and Martin’s sub-zero synth drones, with the latter’s sneering vocals injecting a suitably final note of despair, 10 Swords grabs from a sonic palette that ranges through early avant-garde electronica, proggy Giallo jams and John Carpenter’s 80s horror soundtracks as well as from heavy music of all persuasions. That it always stays firmly within the twisted branches of Metal’s charred family tree is testament to the focus and determination of its creators, who have transformed the limitations of their methodology into grim triumph.

That’s not to say The Poisoned Glass aren’t out on their own when it comes to taking the blowtorch to the Metal rulebook. Once upon a time it would have been almost treason to suggest chucking out the guitars to any band that hoped to identify with Metal in any of its forms, so integral are riffs and shredding are so integral to the genre. Yet outfits as diverse as Botanist’s hammered dulcimer and drum attack and the ongoing shapeshifting of Ulver – there are plenty more examples – have shown that you can meddle with the blueprint without losing credibility, and even evolve in the process. And don’t forget Stephen O’Malley, Dahlquist and Martin’s old Burning Witch chum, whose two-chords-no-drums-to-infinity aesthetic with the mighty Sunn O))) has shone a black light onto a possible future path for rock music itself.

The Poisoned Glass is in good company, for sure. However, before we get too cerebral, let’s not forget that 10 Swords rocks hard and heavy. The nine minutes and 28 seconds of Silent Vigil are like a long, slow punch in the face from a glacier, Dahlquist’s bass grinding through its changes with pure gigantic evil as the steel spears of Martin’s synths add injury to insult, his vocals morphing from their trademark disdain into a kind of Satanic gloop. The tune actually dates from 2010, when Dahlquist recruited his erstwhile bandmate to help out on a piece originally intended as a solo bass work. It surfaced on a Swedish compilation, but it took a while for the duo to get anything else down on tape, Dahlquist occupied with stints in Asva and DAMA/LIBRA and Martin with his Sarin and Moribosa projects.

That extended gestation is over, and 10 Swords is the void-opening result. Not bringing in a guitarist has proved particularly inspiring. Dahlquist’s bass does everything required in terms of riffs, its bruising muscularity matched with a fluidity on tracks like Plume Veil that recall the morbid chill of Pornography-era Cure as well as more conventional heavy stompers like Black Sabbath’s Iron Man. On Toil and Trouble, meanwhile, he seems to have abandoned his instrument to conduct two huge tectonic plates, the subsonic roar emphasised by Edgy59’s bass synth drone mirroring the dread-filled chord progression.

The mood of unremitting bleakness is pushed up a notch by the combination of Martin’s electronic textures, which burst suddenly in atonal waves of white noise, and his searing vocal howls, which evoke the fury of some dastardly pan-dimensional overlords – the Chitauri, perhaps  – whose plans for galactic superiority have been vanquished. It’s to Martin’s credit, however, that he imbues these utterances with proper scary power, so what could have been garish melodrama actually hits an appropriately soul-petrifying chord.

With little to lighten the general feeling of despondency, it’s probably fair to say that The Poisoned Glass don’t make music for the faint-hearted. It’s easy to imagine a wall-mounted thermometer in the recording studio hitting absolute zero at certain points while Dahlquist and Martin were doing their stuff – probably during Eels, in fact, when the weird mewling and screaming that punctuates the near-liturgical throb seem to suggest that unnamed horrors from beyond the void are tearing down the barriers between dimensions in preparation for wreaking havoc on humanity’s ass – such is the aura of frozen malevolence. But if listening to this record occasionally sounds like walking through a long, dark tunnel, thanks to Dahlquist and Edgy59’s singular vision, 10 Swords is a journey worth taking.