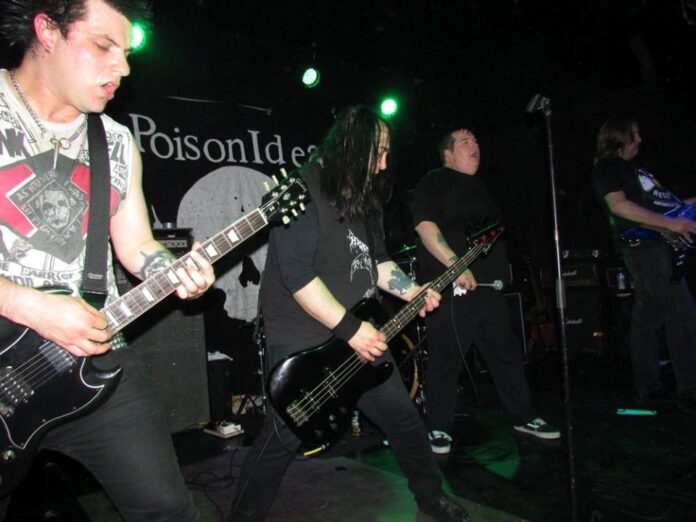 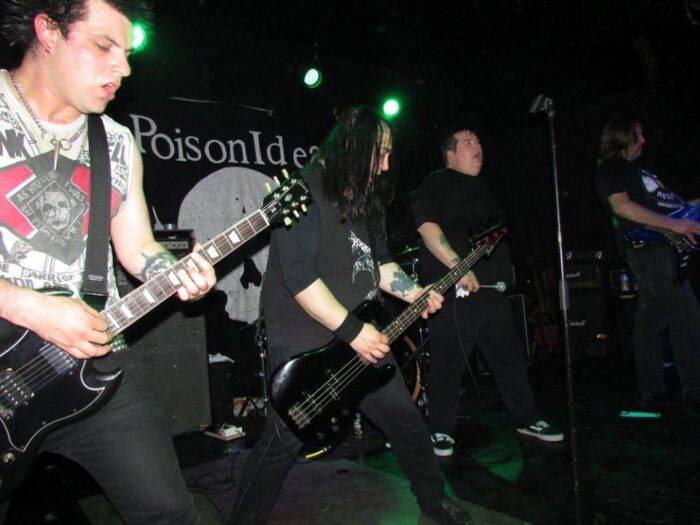 Long running punk band Poison Idea released their first album (our review) since 2006’s Latest Will and Testament in April, an album they’ve recently been over in the UK on a tour to support. It took in Audio in Glasgow a few days ago from where Harry Mulligan, an old fan and friend of the band, reports back.

It had been twenty nine years since I had last been to a Poison Idea gig, that one in their hometown, and rocking up with the original Mistress of Mayhem, Mish Bondage, from fellow Portland punks, Sado Nation, lent an emotional legitimacy to the night. Similarly, it had been thirty-three years since that first Poison Idea show at Clockwork Joes, also in Portland – the same age as the iconic fella on the cover of Pick Your King was when he was crucified. Growing up on that scene, as any of us would testify, wasn’t for the faint-hearted.

Jerry A, their enigmatic front-man, said to me some months ago: ‘Harry, we went out on the road (back in the day), and when we came back, you were gone!’ I’d disappeared down a rabbit-hole, which is a story entirely for another time and place.

It was a dismally rainy day in Glasgow, and to make matters worse, Jerry’s spare guitar that Eric ‘the Vegetable’ Olson was using himself as a spare, had been left in the previous evenings venue in Gateshead, meaning a tedious detour to reclaim it en route to Manchester. Despite relaying this news to us outside the Weatherspoon’s pub on Glasgow’s Jamaica Street, next to Audio, we both simultaneously broke into a grin. It was as much a smile of recognition as an affirmation of survival of the nihilism that permeated all of our lives at the time when we’d last seen each other. 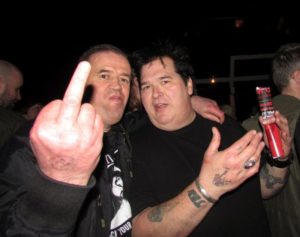 ‘Don’t Know You’ from the new album, Confuse & Conquer opened the show, while AA, from Record Collectors are Pretentious Assholes, acted like a ‘portal’ transporting me through space and time, and into my own youth. Just to Get Away, Punish Me, and Taken by Surprise – all bread and butter PI were in the first half a dozen songs on the set list. Draped over a monitor wedge, I was hit full frontal by how gloriously muscled Poison Idea are in 2015, which in turn was juxtaposed by a sadness evoked by tunes that I remember Tom ‘Pig Champion’ playing. It was like someone old, someone new, someone borrowed and someone black and blue sprung to mind as I looked up from my contemplation just as a stage diver landed on his ear during a thoroughly, thoroughly immense and epic rendition of my old favorite: Alan’s on Fire!

“In Portland we like moshing!’ said Jerry as they exploded into Rhythms of Insanity,– Glasgow did too! ‘We’re raising these new tunes up the flagpole to see if any of them fly?’ Jerry tells the dervish-like Glasgow crowd prior to Me and JD, also from Confuse & Conquer

It’s impossible to keep my eyes on the stage as hard as I try to, given that the crowd have descended into unadulterated fun and the entire venue is a cauldron of idiotic grins and entirely good humour. ‘Have you lost something?’ Jerry enquires of an audience member in mid-set – and before we knew it, he has the entire crowd parted like the Red Sea, looking for a mobile phone that a punk chick has been estranged from, bringing a fragment of that Old Skool Portland, Oregon aesthetic into deepest, darkest Glasgow. 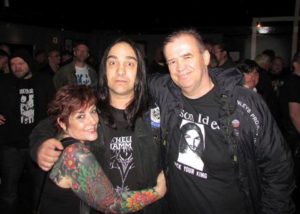 Marked for life, Drug Revival and Hangover Love Attack ensue and he takes the time to dedicate the set to Mish Bondage from Sado Nation and myself. For about the second or third time he tells the audience that the next one is the last song, but I know when they get to Motorhead, that he means it. At that point Jerry A makes the night for me as he clasps his hands together, gesticulating prayer-like towards Mish Bondage in a heartfelt and moving mark of respect, and reverently bows in her direction. It’s a poignant moment as I look at Our Mish, and then up at Jerry, collectively the King and Queen of Punk in Portland. They finish with Motorhead (Motherfuckers).

Afterwards, the crowd remain chanting: ‘One more song – One more song’, but Jerry A has left the building despite promising to get a round in, but also remembering that truth which is axiomatic to all great bands – leave them wanting more! I can’t prove it, but I know how sensitive Jerry is, and I don’t like goodbye’s either!