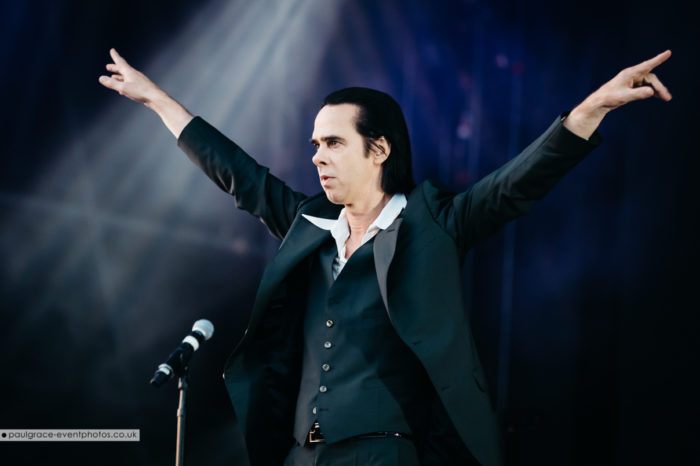 Glastonbury it wasn’t. There was no mud, no five-star yurts, no face-painted trust-fund hippies in flower-decorated green wellies, no annoying stiltwakers, jugglers or diabolo artistes, no tabloid journalists hunting for slumming-it supermodels on drugs, no festering latrines and no Lost Vagueness. But it did have a surprise appearance by Kylie Minogue.

Hardcore hippies might turn their noses up at the corporate face of festivals in 2018 but there’s a lot to be said for a well-organised affair with a precision sound system, proper food and drink at reasonable prices, non-smelly toilet facilties and proximity to buses and Tubes so you can get home in time to sleep in your own bed. Yes, that. Mostly that.

So welcome to All Points East, brought to you by AEG, the people behind Coachella.

They may have sent Field Day across the river to Brockwell Park but their ten-day extravaganza has been hard to resist. After an opening weekend that climaxed with Bjork in a thunderstorm, last weekend saw 100,000 music fans descend on Victoria Park in East London for a triple-header that began on Friday with Catfish & the Bottlemen, attracting the youngest (and smallest) crowd of the three.

Saturday moved up a gear with a stellar line-up topped by The National, finally fulfilling their decade-long promise to become festival headliners. And what odd headliners they make. Much like Radiohead at Glasto – but, despite some foolhardly comments to the contrary, nothing like them musically – they defy all the conventional attributes of a bill-topper. Their songs are intelligent, subtle and complex, musically and lyrically, and generally steer away from anything resembling a traditional chorus, let alone the kind of anthemic singalongs favoured by those who have spent the past eight hours in a field getting wasted on pale ale and whatever recreational substances they smuggled in.

Matt Berninger, with his unkempt greying hair and beard, matching his trademark black suit with a garish holiday shirt (where’dya get it Matt? I want one!) does not resemble a rock’n’roll frontman so much as a professor of comparative literature at an East Coast university. Or, it has to be said, Jurgen Klopp. But he’s as cool as fuck, and his star quality shines as bright as his shirt. 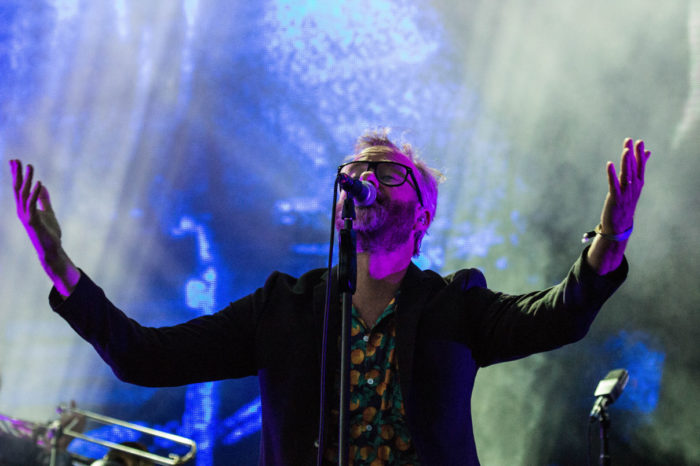 They play their set equally cool, gentle ballads giving way to the mid-tempo slow-burners that are their stock-in-trade. Blood Buzz Ohio is an early highlight, Squalor Victoria and England doff their cap to our surroundings; a brand new song, Light Years, sees two of The Staves (Emily and Jessica) add backing vocals and the epic, elegiac Fake Empire lets the crowd find its voice before Berninger goes walkabout for their party piece: and you ain’t seen nothing ‘til you’ve seen a beautiful blonde eight-year-old girl sitting on her dad’s shoulders ecstatically singing along to the chorus: “I won’t fuck us over, I’m Mr November / I’m Mr November, I won’t fuck us over.”

With any other band that would be it; but The National are not the sort of band to end on an uptempo high, even at a festival; that would be an easy cliché. Instead they delve into the deepest depths of their back catalogue to find the unutterably sad piano ballad About Today, and dedicate it to Frightened Rabbit’s late lamented Scott Hutchison. It’s emotionally overwhelming. Then on comes Adam Granduciel from The War On Drugs, who have just played the other stage, to add more guitar to Terrible Love before the band recedes to the darknened wings, leaving Berninger alone onstage, conducting 35,000 people in a mass singalong of Vanderlyle Crybaby Geeks, the closing song from their masterwork High Violet. It’s spellbinding and heartbreaking.

Earlier in the day, Cat Power brought a touch of the nighclub chanteuse to a sunny afternoon, rocking a black velvet dress as she sang her soulful torch songs to a sweltering audience on the mainstage, with a parting gift of Good Woman that was, for me, an emotional highlight of the whole weekend, while Warpaint brought a doses of California sunshine to the North Stage with their breezy, gauzy, guitar pop; occupying the slot that Cat Power might profitably have taken, The War On Drugs played as darkness fell, their retro rock and noodly guitar grooves seemingly suited more to a summer afternoon. In between came Spoon and Broken Social Scene, before Future Islands injected a hefty dose of festival fun into proceedings with their synth-pop tunes Sam Herring’s comedy Cossack dancing.

Sunday drew a slightly older crowd, attracted not only by headliners Nick Cave & the Bad Seeds but also a couple of vintage acts from the late 1970s in the shape of Patti Smith and Psychedelic Furs. Those preferring a more contemporary sound were catered for equally well, with Shame giving the early birds a jolt of their shitkicking rock’n’roll madness, even if a cruel critic might dismiss them as Jimmy Pursey fronting U2 before the hits kicked in, and Courtney Barnett demonstrating her newfound star status. 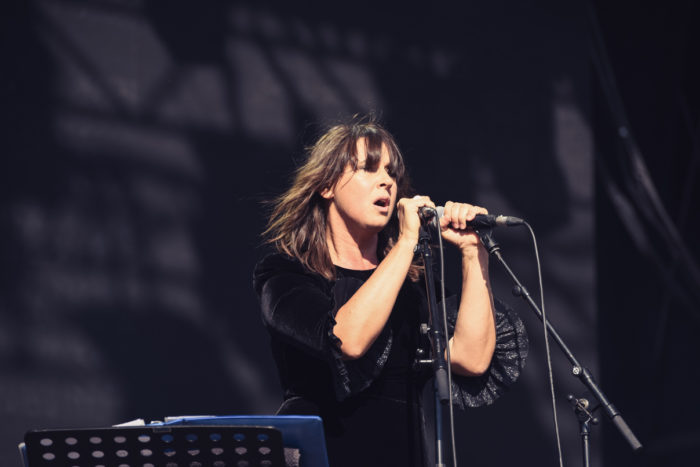 What was remarkable during both those shows – and The National’s the night before – was just how stunning the sound system on the main stage was: every word and every note audible, even from the wings and the back; it was almost too much for Black Lips whose sound is so steeped in Sixties garage-punk that it loses some of its charm without the distortion provided by cheap amps: still, they made up for it with their Rocky Horror-style stage outfits and stunts, chucking toilet rolls into the crowd like old-skool football hooligans.

With St Vincent headlining the secondary stage, Patti Smith plays second fiddle at the main stage, though their timings (and the 15-minute walk between stages) mean you have to choose. Smith’s set is a game of two halves, initially losing the crowd with her Ginsberg readings and hippieish inducements to smash the system, plus a pair of not-necessarily-well chosen cover versions with a political subtext – John Lennon’s Mind Games and Midnight Oil’s Beds Are Burning – but she builds up momentum with a pretty Pissing In A River that gathers force in its mantra-like coda, leading into a frankly spectacular double-whammy of Land and Gloria from what remains arguably the greatest of all debut albums, Horses, ensuring that there’s a singalong finale. 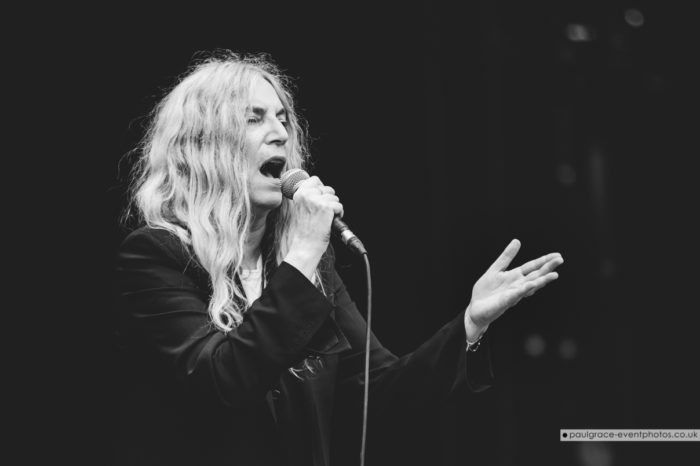 Then it’s left to Nick Cave and it seems that every single soul in Victoria Park has pressed towards the stage. I’m struck with the curious thought that when I was a teenager regularly watching an out-of-his-gourd Cave with horrorshow hair atop a skeletal frame at Birthday Party shows in Camden Town, the idea that he might one day headline a festival for 35,000 people – or even be alive to do so – would have been, frankly, laughable.

Yet here he is, the elder statesman of everything dark and broody and gothic, with his rumbling baritone and his doom-laden lyrics, and his trademark black suit and white shirt and his mane of dyed-black hair with its widow’s peak. And here’s the unmistakeable figure of Warren Ellis, wild of hair and wilder of beard, like some sort of old man of the sea, cavorting about with his violin like a demented goblin before scampering back to his stool to play beautiful piano melodies that Cave fills with sadness and fury. And behind them both the Bad Seeds, their subtle constructions amplified by the pin-sharp precision of that sound system. And we see that against all the odds, as we saw on last year’s arena tour, Cave is to the manor born when it comes to handling a huge crowd: half preacherman, half rock god, touching hands, revelling in the acclaim, feeling the love, giving it back to us in spades. After all he’s been through, it’s the least he deserves.

You can hear a pin drop during Jesus Alone and Magneto before he cranks it up with Do You Love Me. Then he surprises everyone by transforming us into a tempestuous ten-minute maelstrom version of From Her To Eternity. Abrasive, dissonant, chaotic, psychotic: it has the desired effect of rooting out the Johnny-come-lately crooner-Cave fans who never caught up with the old stuff and sends them scurrying for cover. Those of us near the front are almost bowled over by bewilderered buyers of recent albums who thought they’d come to see a slightly darker Michael Buble massage their souls: instead they get a fucking maniac hectoring them about murder and mayhem and God and some bad motherfucker called Stagger Lee. 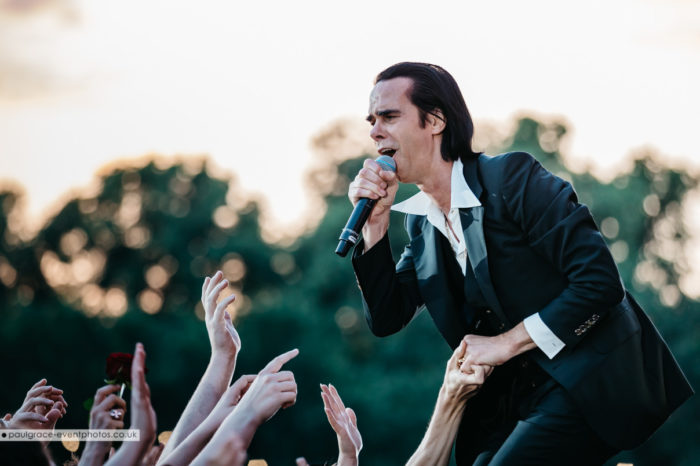 Then there’s the mass singalong of Into My Arms and it’s like the biggest church congregation you’ve ever seen singing a hymn in praise of a man who doesn’t believe in an interventionist god, and you realise that’s the very definition of irony. And then he pauses a little and addresses the crowd and announces: “Ladies and Gentlemen… Kylie Minogue.” And there’s pandemonium as a tiny figure in a sparkly dress comes on and falls into his arms as he stoops to enfold her in his lanky embrace, and people are screaming as they realise that it’s KYLIE FUCKING MINOGUE right there onstage, and they sing a note-perfect duet of their murder ballad Where The Wild Roses Grow and then she’s gone.

But he’s not. And the Bad Seeds haven’t.

By the time they get around to the finale the croonerphiles have either gone home or come sheepishly back to the fold, holding their babies with their big baby headphones and clutching their loved ones as Cave bellows the primal gospel blues of Deanna and the Bad Seeds kick up a rumpus that only gets wilder as he tells the well-told story of that bad motherfucker called Stagger Lee with a Colt .45 and a pack of card. And as you head home with the soothing sadness of Push The Sky Away lulling you towards your slumbers, you can’t help thinking: who needs Glastonbury when you can have this right there on your own doorstep?

For more of Paul Grace’s writing and photos go to his archive. Paul is on Facebook, tweets as @pgracephoto and his website is www.paulgrace-eventphotos.co.uk