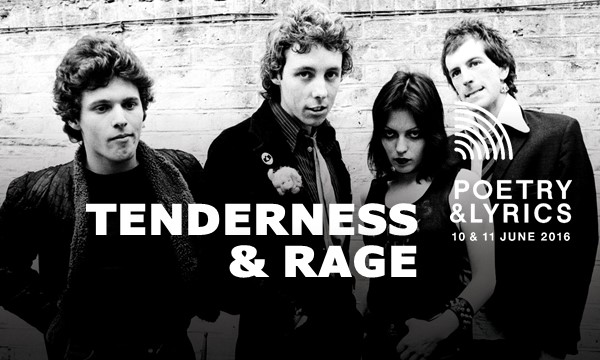 Poetry & Lyrics Festival celebrates the poetry of punk : London : Sat Jun 11th. Amongst the frenzied rage of the punk era are some of the most romantic lyrics in the English language. How has punk weaved love, social commentary and uprising so successfully?

The finale of our Poetry & Lyrics Festival celebrates the poetry of punk with musicians who birthed the movement and transformed the landscape of lyrics with their blistering new approach.

BBC 6Music’s Steve Lamacq, whose journalism has widely covered the impact of punk hosts a fantastic evening of performance and conversation with The Adverts’ TV Smith, Penetration’s Pauline Murray and Crass’ Penny Rimbaud.

Steve Lamacq
Steve Lamacq is a DJ and journalist who has more than 25 years experience in the music industry. In a career which has included stints at the New Musical Express, Radio 1 and his current home BBC 6Music, he has gained a reputation for championing new bands to success, while interviewing some of alt-rock’s biggest names.

TV Smith
TV Smith was founder member, singer and songwriter for The Adverts, who formed in the summer of 1976, and became one of the leading bands in the first wave of British punk rock. In early 1977, they performed regularly at the seminal Roxy Club in London, and gained cult success with the Stiff Records single “One Chord Wonders.”

Pauline Murray
Pauline Murray is the lead singer of the punk rock band Penetration, originally formed in 1976 and now touring again. Her influential lyrics reported on the social climate of the times and explored romantic themes. In 1980 Murray worked on her first solo album The Invisible Girls, which also included ex-Penetration member and co-writer Robert Blamire.

Penny Rimbaud
Founding member of the anarchist punk group Crass, which released albums including Penis Envy and Stations of the Crass, Penny Rimbaud is a musician, poet, author and activist. His books include This Crippled Flesh.

How to Book
www.kingsplace.co.uk/whats-on/curated-weeks/poetry-lyrics
Box Office 020 7520 1490

Festival discount of 20% if you book 2 or more tickets.