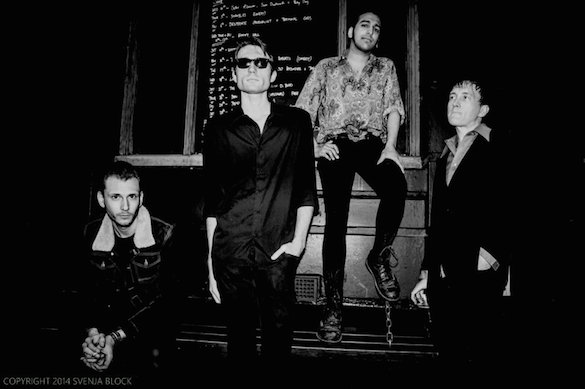 Terminal Gods come back with a brand new single, Cold Life, on Heavy Leather Records on 14th July. To celebrate they’ve put together a cracking playlist for us which you can check out below. It’s chock full of Louder Than War favourites, so frankly I think it’s safe to say that if you like Louder Than War you’ll like Terminal Gods’ playlist! Oh, and of course you’ll probably like the ‘Gods themselves to boot of course, hence why we’ve included their latest video for your delectation below too!

The release of Cold Life accompanies news of the band’s first UK tour in July with fellow Londoners, Dressmaker, another band who Louder Than War rate highly. The Gods have a sound described as combining “thunderous drums with a garage fuzztone of a blues riff at its core; and a lead guitar that snakes, soars, and escalates throughout.” Live, we’re told, is where they excel, so it makes sense to try to catch one of these upcoming live dates.

Here’s a few more words about them in case the above isn’t enough to convince you of their excellence:

“Finding themselves halfway between the uncompromising, raucous hard rock of the 70s, and the cold, new wave beats of 80s, Terminal Gods are the genuine desperadoes of London’s emerging underbelly of dark dive bar rock bands.”

So what influences a band like Terminal Gods? That’s what we wondered so we asked the band if they wanted to put together a mix for us . Four tracks from each band member, 16 in total. You can stream the mix via the Spotify widget below, and underneath that you’ll find out why each member chose the tracks they chose.

But before plunging into the band’s mix, check out their new video which was directed and edited by Andy Oxley for Screen 3 Productions at their recent show at Power Lunches in London:

And here’s the aforementioned mix. Hit play then read on for why each track was chosen:

I originally had Big Black, Fists Of Love – Live in London (from The Pigpile LP), on the list  but it isn’t on Spotify. Shame really, as this stunning piece of live filth just shows how well a live drum machine and scuzz guitars can create a sound like pure war, as heavy as any conventional rock band.

A.R.E. Weapons are a current infatuation of mine, I love the aggression and raw energy in the delivery, offset by fairly minimal, vintage sounding electronic instrumentation. Like Big Black, this shows that there are a lot more ways of making high impact rock and roll than just the basic drums/guiar/bass format.

APTBS gives me the same sort of buzz, but held back on the vocals and all into the guitar. I love the massive wall of fuzz, that still manages to retain a tightness and urgency often lost by bands that follow that path further down the shoegaze path.

I’m not a big fan of Primal Scream in general, but there’s something about this track (and XTRMNTR as a whole) which resonates with me. It’s got a speedfreak techno rock and roll thing that feels like a natural continuation of  the more hard edged post-punk bands of the early 80s.

Pulp are long term favourites of mine. Every time I think I’m bored with them, something in their back catalogue refreshes my interest. Death II is such an unlikely combination of disco and glam rock and I’d like to think that whatever musical route Terminal Gods decided to follow, we could do what Jarvis does and conjure up blatant anachronisms and make them sound so…vital.

God Damn are the second best live band I’ve followed religiously in my adult life. Number one was Northern blues/ doom two piece Wet Nuns, and since their inevitable split the only band that have been able to ease my broken heart are God Damn. Thom dances on his pedal board like nothing I’ve ever seen, and it sounds huge. They’ve been getting loads of well-deserved attention lately, plus they’re lovely blokes so hopefully they’ll stick it out.

I love a lot of heavy bands, bands who are serious about what they do, and what they do is heavy. I also love ‘good time’ bands, bands out to have fun, like almost every psychobilly record I own. I have never in my life heard a band so bone crushingly heavy as Mclusky, yet play ’em at a party and everyone’s dancing. It’s hardcore, with pop sensibilities. We had the pleasure of seeing Future of the Left (the band they later became) play this song last year and shit went fucking mental. An excellent show, with the added bonus of support from The Wytches.

We are surrounded by buzz bands seemingly appearing out of nowhere, they’re all utilising similar sounds, they’re good looking and they’ve been around for like 3 seconds. For me, The Wytches are the only ones worth the buzz. It’s psych, sure, everything is. But there’s blues there, western, folk and loads of other cool sounds but most importantly this track is SURF. And it was totally unexpected! I kinda think this single was one big middle finger, aimed directly at their contemporaries.

I’ve never liked drum machines all that much, too many bands using them in the all the wrong ways. Hola Ghost use theirs like nothing else, it’s ridiculous. And they (along with Ulterior) are largely the reason I joined the Gods. Everything they release is absolute gold and they’ve a penchant for big choruses, cinematic western sound effects and BEATS.

Amazing Snakeheads – Everybody Wants To Be Her Baby:

So much atmosphere – dark, brooding, aggressive, yet restrained. The film noir references are obvious, but the tortured delivery makes it work. Cheap whiskey (neat of course), and a pack of wet rollies.

I challenge anyone to come up with a better song to accompany the opening of that first (?) beer around 5pm on a Saturday afternoon. All the parts are so simple but fit together beautifully. The synth line underpins the whole song and is so atypical of dirty south rock ‘n roll, yet most people don’t even seem to notice it. Watery American beer, drunk from a bottle.

Fat White Family – Is It Raining In Your Mouth:

Filthy and sleazy. I don’t think many bands have pulled off that rough, live sounding dynamic so well since the 70s, and when the song peaks it makes me feel more than a little unhinged. Warm champagne swigged from a bottle, lingering aftertaste of MDMA.

Swans – A Little God In My Hands:

A band that can release a 120 minute double album that constantly engages and begs for repeat listens is something special. To do it again only a couple of years later makes me wonder whether Gira isn’t perhaps the 21st century Robert Johnson. A hungover Sunday afternoon spliff with a glass of average priced Californian Cab Sauv.

Kontravoid is a one-man mystery from Canada. ‘Native State’ is probably the best track off his self-titled LP. The pop is dark and the atmosphere crushes in just the right places. It was actually this song that finally gave me the push to start A New Dusk. I realised there was so much dancefloor-oriented noir pop around and yet no-one in London seemed to be showcasing it on a regular basis. A New Dusk plays a lot of guitar bands too, but I’ll always play as much dark electro as possible.

Another New Dusk act, picked up for their incredible track ‘Dark Allies’, which is a bit of an anomaly in their back catalogue. ‘Pope will Roll’ is from their second LP and, as I’ve mentioned elsewhere, it’s that rolling repetition that is the real cinch. Given time, ‘Cold Life’ could have quite easily morphed into a much deeper exercise in deja vu.

Brian Eno includes the aphorism “repetition is a form of change” in his Oblique Strategies. For me, ‘Born under Punches’ perfectly embodies this concept through the constant layering and reintroduction of musical rhythms and verse.

Tom Waits is one of those musical luminaries, a bit like Nick Cave and Lou Reed, who get thrown about the influence list of all those non-mainstream mainstream bands you see in Hoxton. It’s always refreshing to take a listen to Track 1, Side 1, Album 1. It’s better than all that cookie monster stuff. For me, Nighthawks at the Diner is the pinnacle of Waits’ stint with Asylum records but it all starts with Closing Time and what a way to start.