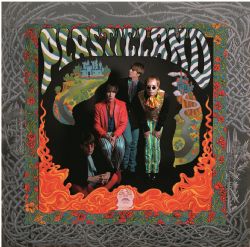 This reissue came out a while back but I’m sad to say I only bought it myself the other day, it’s tremendous, so in the spirit of wanting to spread the word about something more people should really know about, here is a review of Plasticland’s self titled (well actually it briefly came out under the title of “Color Appreciation” in France) and fabulous album….

Though the “Paisley Underground” bought psychedelia back into the public eye, very few in any of the acts concerned were as outright wild as Plasticland. Arising from the ashes of a previous combo, the intriguingly monikered Arousing Polaris, Plasticland were formed in 1980 by two long term music veterans in John Frankovic and Glenn Rehse. They sought to marry the trippy sound they could remember from their youth in the 60s to the driving power of the 70s Punk scene and by gum they did a good job at it. Heavily influenced by the Pretty Things’ Psych-era and their De Wolfe music library recordings in particular, Plasticland never lost sight of the power of a good tune and we, the listeners, benefit greatly from this.

Pre-dating the rush to re-discover the sounds of the late 60s of the Paisley mob they released the “Mink Dress” 7″ in early 81 (this song was a left over from the Arousing Polaris days and can be found on Youtube recorded way back in 1977 by them) and followed that up with the “Vibrasongs” EP in the same year. After this flash of activity, it was 1984 before this LP emerged, trailed by the “Euphoric Trapdoor Shoes” single (and no I am not making these titles up!).

One of the pleasing things about Plasticland demonstrated here is exactly how gung-ho they are in presenting their version of Psychedelia – there’s nothing at all fey or wishy-washy about them at all. Soundly built of the basis of a robust rhythm section, even the relatively gentle “Pop! Op Drops” is rock-solid in it’s construction and features a snarling bit of fuzz.

“Posing For Pictures” even taps into the kind of sleaze the New York Dolls specialised in and is genuine Glam Punk monster. Plasticland didn’t stick rigidly to timelines like a lot of bands of similar ilk and could certainly “rock out” if circumstances called for that approach. There’s still space for stately beauty too – “WallFlowers” comes on like a tuff version of 66 vintage Byrds but “Disengaged From The World” mixes this with a wigged out version of the Attractions – it is mighty. Here Plasticland firmly put their own insignia on the style of 1967 and bought it up to date with pin sharp rock n roll smarts. This reissue catches them at their rawest and most raucous and the sleevenotes by the band members give you an insight into their early history, but happily they still seem to be out there doing it to this present day! A true neglected beauty this!