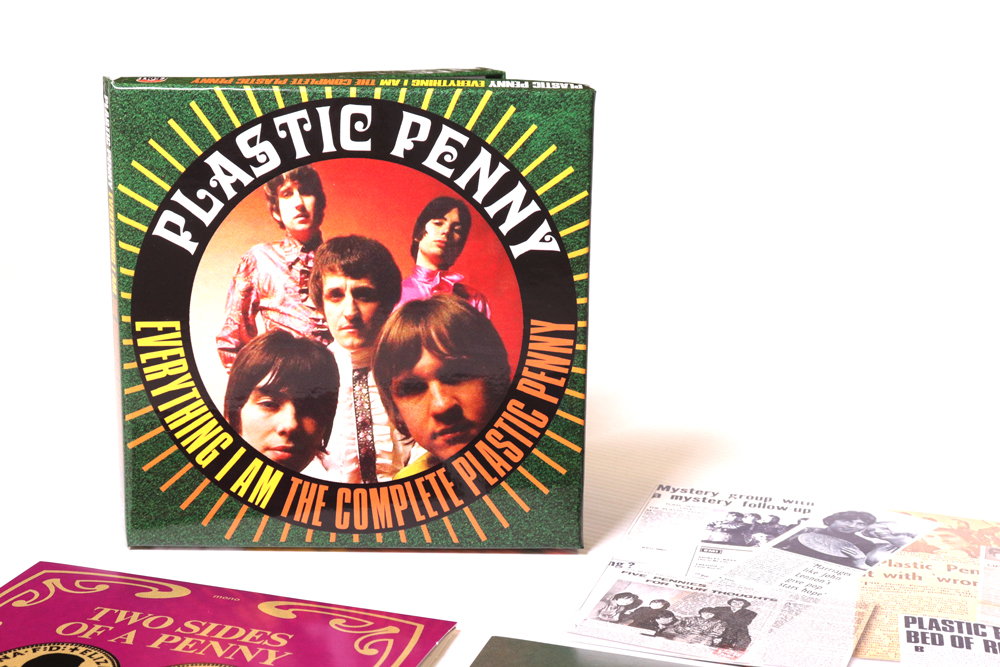 Plastic Penny – Everything I Am 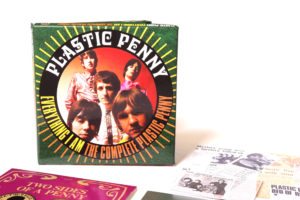 Subtitled “The Complete Plastic Penny”, this new collection brings together everything recorded under the name, including all surviving BBC sessions and two albums in Two Sides Of A Penny and Currency, the former in both mono and stereo forms……LTW’s Ian Canty finds a band that were conjured almost out of thin air to promote the surprise success of Everything I Am…..

Plastic Penny were originally conceived as a classic “Tin Pan Alley” ruse, constructed by Page One label head and manager extraordinaire Larry Page. The ex-Kinks/Troggs kingpin had identified Everything I Am as a song with potential, finding it on the flipside to the Box Tops’ Neon Rainbow, the follow up to their smash hit The Letter. He decided that session singer Brian O’Shea (soon to be renamed Brian Keith) was just the man to replicate Alex Chilton’s vocal style and with backing from other members of the session scene the track was completed. A composition by Brian Keith and keyboardist Paul Raymond (later of UFO), entitled No Pleasure Without Pain My Love, was also taped and provided the b side.

This single was duly released on Page One Records late in 1967 under the name Plastic Penny. 9 times out of 10 back then these type of things disappeared without trace, but Page was shrewd cookie and the song got good airplay and made the charts, climbing as high as number 6. This success presented its own problem: how do you promote a record rising rapidly up the charts without a band? Thus the first real line-up of Plastic Penny was quickly thrown together, with Keith and Raymond joined by the Sunderland-based duo of drummer Nigel Olsson and guitarist Mick Grabham, with Tony Murray (who was a member of Universals along with Keith and Raymond) completing things on bass.

The quintet promoted the single on its journey to the UK Top 10 and were entrusted with playing on, if not actually writing, the follow-up. This point in time was pretty much make or break for Plastic Penny, so Nobody Knows It was sourced from the sure-handed pairing of Bill Martin and Phil Coulter. These two had been behind many a hit and had recently won the Eurovision Song Contest with Sandie Shaw, so the catchy number they provided seemed a sure bet. The band managed to render the song with some nice organ swirls that pushed it close to “flavour of the month” Procul Harum in terms of sound. Another hit could have seen them establish a run in the charts, but sadly it was not to be, as the record did not trouble the Top 50. Even so, they pushed on with completing their debut album.

In truth Two Sides of A Penny was an uneven LP and somewhat aptly named. As far as I’m concerned, the better material is mainly situated on the second side and the stereo version carries a little more zing than the mono take, but that is a closer call. Although the hit (that most of the band never played on) was a nice bit of ornate late 60s Pop, the attempts to follow in the same style with Keith at the helm are a bit lumpy. Plastic Penny were generally a better outfit when they were given something more to get their teeth into, which they did on side two.

I Want You has drummer Olsson taking the microphone on an excellent tough fast rocker, but Mrs Grundy is the album’s real highlight, a fine piece of Psychedelic storytelling with some great instrumental touches. Take Me Back has a nice fresh feel to it and It’s A Good Thing is busting out with Pop/Soul goodness. They also have a dart at the Fabs’ Strawberry Fields Forever, which is ok but doesn’t add a great deal to the original (apart from grafting on a bit of Hello Goodbye). Both sides of their first two singles feature as bonus tracks on this disc, along with a couple of Italian language reworkings of the a sides.

The second disc, which houses the stereo version of the debut album, has a marvellous bonus in 14 BBC session tracks. For the most part the songs put down for the Beeb don’t differ vastly from the released versions, but do have some great Brian Matthew intros and outros (these recordings are taken from transcription discs, so Brian appears all over the place, even if the tracks were originally set down for other DJs’ shows), which give them a lovely “period” feel. There are a few Plastic Penny songs here which never saw official release though. Turning Night Into Day is a Baroque Pop treat, lots of strings and a soulful vocal – really nice stuff and the Killing Floor shows their tougher, more R&B influenced side. In addition Penny reunited with Brian Keith (see below) for an early version of his solo effort The Shelter Of Your Arms. Overall this part of the boxset is probably the most interesting and exciting section.

After the album was released came the inevitable split between the band and Keith – they had been effectively pulling in different directions for a while and Keith opted for a solo career. A brand new record heralded Penny’s next phase, the excellent Your Way To Tell Me To Go/Baby You’re Not To Blame single. Though again not a hit, this was for me probably their best release. The A side is a real winner, thunderous playing more in the style of the Move and the Who and the flipside is no slouch either, with a rolling bass line, cool piano and a great build to the chorus. Both have some excellent guitar work adorning them. Unfortunately the following Hound Dog single is a bit “of its time”, slowed down jamming covers were all the rage, but this was still a bit naff. More positively Currency, which occupied the other side, is a smart instrumental goodie.

On the whole you would have hoped that the good showing on 3 out of 4 of the single sides would augured well for their second album, also entitled Currency. Unfortunately it again feels to me like it isn’t quite the LP they truly had in them. Part of the problem is the amount of outside material, with four out of the nine selections being covers. I can understand why they did MacArthur Park in the grandstanding style of the Nice, it was all the rage at the time these types of things, but all these years on it feels like it is just banging up the running time. Elton John was circling the band at the time, but his and Taupin’s Turn To Me isn’t one of their best.

The sad thing is their own material is by far the best stuff on the whole album. Give Me Money is really top quality, they had played this one a while before Currency was cut (it is on disc 2 in its BBC session form), but it is still good to hear more than once. A wonderful, punchy and catchy uptempo piece of Power Pop that would certainly have given Roy Wood or Pete Townshend a run for their money. The aforementioned Your Way To Tell Me To Go, Baby You’re Not To Blame and Currency are all superb and Sour Suite is an effective jam which gives the band a chance to show their chops. On the positive side, this LP represented an improvement on their debut, but time was not on their side. You also have to factor in that even their better material would have seemed dated by 1969 (but with the elapsing of so much time, it sounds right on the money now).

In fact the band virtually folded after the record, with Raymond and Murray dropping out. Mick Grabham and Olsson put together a final line up, being joined by Stewart Brown on vocals and Freddy Gandy on bass. Even Olsson had scarpered by the time the final Plastic Penny single was released She Does/Genevieve. Despite the much changed personnel, this was another cool single, with the topside’s joyous vitality proving infectious and early song Genevieve being given a good dose of late-Psych vim. Still, it was too late in the day for Plastic Penny and soon after they were no more. The final three singles, plus rarity Celebrity Ball, which only was previously available on the obscure Heads I Win – Tails You Lose (Page One weren’t going to give up on the coin-related puns easily!) Plastic Penny compilation make up the bonuses here. The pick is She Does, a great single which really deserved much better.

Despite some reservations, Everything I Am: The Complete Plastic Penny is an excellent and thorough compilation of Plastic Penny’s recording career with an in depth sleeve note that tells the band’s convoluted story very well. Though people might only remember them for that single if at all, they were far better when they were given a chance to be a “proper” band rather than puppets fronting a record they didn’t record. That hit didn’t do them many favours, but on the evidence here Plastic Penny had more to offer, including some great songs of their own in Give Me Money and Your Way To Tell Me To Go. It was a shame that they were never given their chance to produce a whole album of their own material, but this collection has a few powerful 60s Pop gems to be gleaned. Another sterling effort by the Grapefruit imprint.