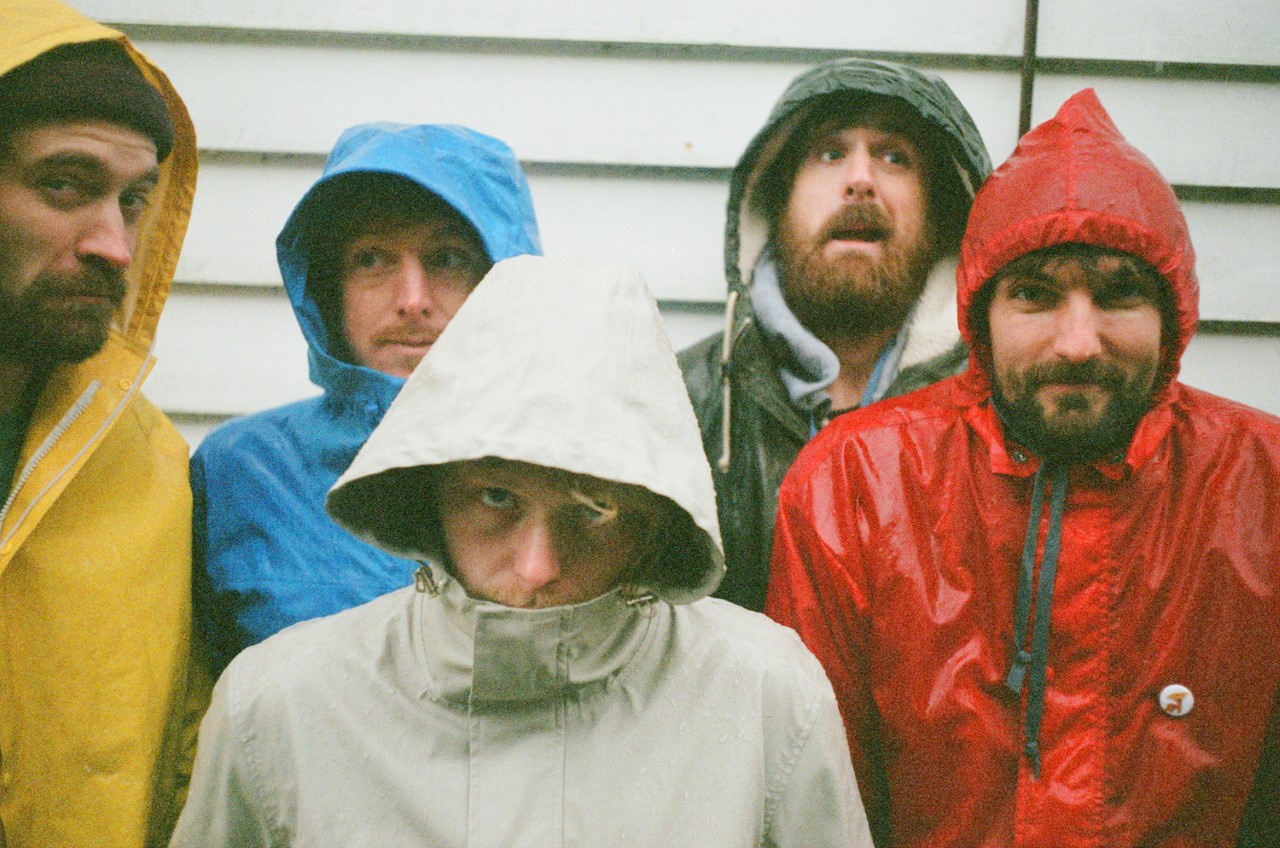 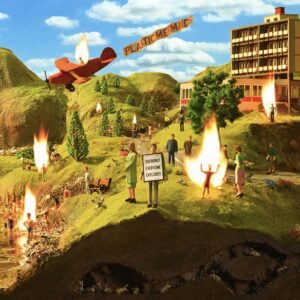 Keith Goldhanger reviews Suddenly Everyone Explodes, the debut album by Plastic Mermaids, a band he’s mentioned more than once over the past few years.

‘Our dad went for a walk in the woods and noticed that someone had built an amazing shed in the garden of the house where Doug and I lived when we were kids. The owners noticed him peering into the garden and came out of the house to see what he wanted. They got chatting, and to cut a long story short it turns out that the new owners of the house are ridiculously nice people who live off the island most of the time and have offered to let us use their shed to make the album while they are away! We’re feeling really fortunate right now and it feels pretty special to be going back to the house I remember from my childhood to make a record’ – Jamie Richards, Plastic Mermaids.

The fact that they’re from The isle of Wight helps to begin painting a picture of a band that have lived and grown up on one of this country’s most southerly islands. A band that have spent the last few years gathering together and building together their huge amount of musical gadgets, strum away at guitars, surf in the sea (where else? = I’ll leave it in) all year ’round and add as much musical accompaniment as possible to any gorgeous piano playing that Douglas Richards can bring to the table.

Not many bands in the UK have displayed their water skiing skills to complement their music as seen on the marvellous 1996 video (below) and one of them (Jamie) got married during last year’s World Cup quarter final. The one when England played Sweden on that really hot day and won (Can’t remember the score any more). They had to cancel a London show in Camden because of the Semi Final that England eventually lost (Cant even remember who England even played in that one, or the score now) and walked on stage at the Citadel Festival just as the final was kicking off. Confident in England’s failure or simply uninterested? We’re digressing already.

A debut album at last then.
Suddenly Everyone Explodes has been made in a shed with the use of a few soldering irons and most of the equipment they’ve accumulated over the years. For some of us it’s been the anticipation that has kept us excited. In the three and a half years since they were first seen cramming themselves onto the tiny Moon Club stage during Cardiff’s wonderful Sŵn festival, this band from the Isle of Wight have clattered their way through many shows up and down the UK. Playing songs that sound as though they are almost falling apart, as they’re probably meant to anyway (at the same bit of the same song every time) but also giving us a set of tracks (mostly omitted from this album) that we have loved, played to death and made some of us say things about all their songs sounding different to one another and how we can’t wait to see this one day in a big field late at night (or a little field).

The times whilst we’ve watched over them since Sŵn have been unusual and puzzling. A month or so after that first meeting they played at London’s Electrowerkz on a Monday night, in middle of winter, a tenner a head and still managed to attract nearly 100 people. All without any press, radio or more than three or four tunes that the public may have had the chance to listen to.
The band members all seemed to think that this is what London is like. Those of us who live here in the capital know it’s not and those of us who can be found standing in empty rooms on any other evening of the week still scratch our heads at this unexplained evening in North London.

More shows around the country including the capital followed. London Fields Brewery in East London one school night also in the middle of a cold snap was packed (Reviewed here). The stage was crammed full of fluorescent acrylic shapes, a mannequin covered in mirror ball tiles, great lights and they gave us all 3D Glasses to enhance the experience. The performance was faultless. It was a night we knew would eventually happen. A night we stayed for another drink that we’d regret the next day.
Festival appearances have been sporadic but it’s probably due to these appearances that casual observers were won over and returned uninvited as soon as any show with a roof on top was announced locally. Standon Calling was four and a half hours too short though and sandwiched in between Idles and Cabbage which was probably the best fun anyone could have in the rain on any wet and muddy Saturday (possibly Sunday) afternoon.

On the one hand it feels as though Suddenly Everyone Explodes has taken an age to arrive but on the other hand the tunes the band have already given us have remained so fresh that they still haven’t yet began to sound tired or jaded. There is no reason to believe this album won’t sit nicely with everything else we already have available by them at the moment. It’s one that some of us have been waiting for, one that will be loved by many music fans that already have that special box that’s kept to one side with Flaming Lips, Sparklehorse, Mercury Rev or Spiritualized CD’s inside them and this is the album we expected from about the first week of hearing them a few days before we went to Cardiff Sŵn Festival in 2015. 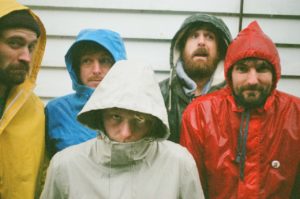 Plastic Mermaids have always made a gorgeous racket when they perform. They make music Iceland’s Sigur Rós threatened to make when we first crossed paths but didn’t eventually manage.

However heavy we are on the comparisons though, the tunes on Suddenly Everyone Explodes (that could easily have been part of a double album had they included all the tunes from previous releases) have the bands own originality wrapped around each glorious beautiful moment. Songs that even once recorded can still sound as though they’re falling apart in the middle, before picking themselves up whilst sounding as natural as when they’ve performed them live. Close your eyes and you can sometimes picture in your head the band plugging and unplugging everything in once or twice during the middle of a song with the record button still on. This isn’t an album you’ll put down after half a dozen listens, there’s so much variation and so much going on and it’s another one we’ll keep coming back to once placed in that box with the those other ones just mentioned.

Spiritualized are the first band you’ll think of once you hit the play button and you’ll think of these more than once during Suddenly Everyone Explodes. 1996 hits out just as The Flaming Lips Do You Realize did when you first heard it and is also about falling in love. This one however is with a robot made of cardboard, if we’ve read all of this stuff correctly. Floating in a Vacuum leans us more towards Johnathan Donahue and the recent Mercury Rev tunes we listen to late at night however in each case Plastic Mermaids have managed to avoid the album coming across druggie in any way and it all still sounds very English.

Music from the countryside in the middle of an Island that we’ve only ever visited in order to dance in, get mud on our shoes and complain about the weather (Camp Bestival/Bestival). Land that the rest of the year lies silent and still apart from inside this shed that this band have managed to borrow, build a studio in, invite loads of their mates along to and make this album in.

By the time we get to 10,000 Violins playing inside an otherwise empty head (that’s the full title of the track not this writers state of mind) it’s getting euphoric but Milk calms us down again and starts as though Douglas is busy spraying the plants mumbling along like a dithery old fool until the rest of the band come in to wake us all up again and bring in a heavenly sounding choir which at this point of the album feels pretty much the only thing they’ve left out so far.

The choir is here for good once we get to the second half of Yoyo with a finale so big you can almost smell the fireworks in the background.

I still like Kelis is the sound track of the members of the band running down Camden high street after a Grandaddy gig to catch the last tube, the last train and the last ferry. A scene so clear it almost feels real (it kind of happened but it’s probably not anywhere near one hundred percent close to the truth). The rest of the album glides along lovely. Strings, piano’s, bells, choirs and every additional sound a surprise. The guitar in Ooh will make you jump the first few times you hear it and the tune it is playing is one you’ll be whistling down the road one day, stopping still and then try to work out what it is being whistled.

As a debut Suddenly Everyone Explodes is fabulous. For some of us it’s simply another album to go with everything else they have already recorded. A fabulous introduction for some people that will lead any first time listener to investigate the past tunes the band have released. A bunch of songs that Plastic Mermaids have built up over many years and a band that we hope can get to that point during their lives when we can start spending a couple of hours watching them all in one sitting.
A bit like Sigur Ros did in that forest in Iceland many years ago or simply in a field and when that smell of gunpowder is not imagined any more.

Plastic mermaids are brothers Jamie and Douglas Richards, who collaborate on vocals, synths and samples, along with guitarist Chris Newnham, bassist Tom Farren and drummer Chris Jones. During Suddenly Everyone Explodes about a dozen other people make appearances that are far too numerous to mention.

Suddenly Everyone Explodes is available on  CD & Vinyl.  Follow this link

You can catch Plastic Mermaids live on the following dates :