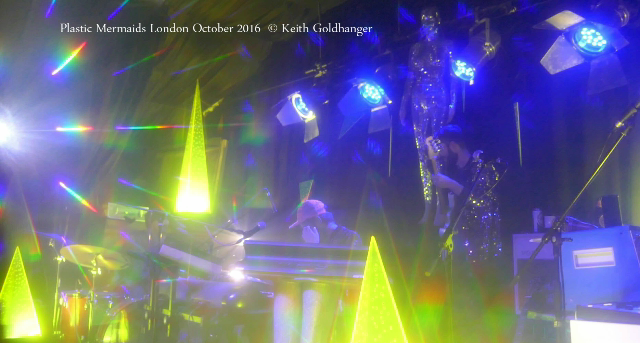 Plastic Mermaids all live on the Isle of Wight and have been favourites of Keith Goldhanger for the best part of twelve months. He’s now ready to tell us about them.

Unlike a large percentage of bands usually written about under this writers name, Plastic Mermaids could, by the time they get old and grey, get to headline a big festival under even more flashing lights than we have here tonight or turn up at the Royal Festival Hall with a huge Orchestra one evening. If this happens then night’s such as tonight will be imagined by those in attendance as something that maybe wouldn’t have been as superior as the evening they’re spending sat in comfy chairs hugging the colour supplement that was purchased as they walked through the entrance door. That can be debated at the time if such thing ever happens.

We spend a lot of our lives in rooms like this watching superb acts that get us talking for days, weeks and sometimes years and we also spend a lot of our time scratching our heads wondering where the rest of the music loving population could be as we glare across the floor at large gaps where we feel so many of our acquaintances could or possible should be standing.

This evening, along with the dozen or so times we have seen Plastic Mermaids the question we ask is the opposite. We wonder where all these people that are here have come from and what has made them leave the comfort of their sofa’s to watch this band. Media coverage can be described as simply modest. In comparison to most bands we’ve been watching and drinking beer with over the past few years they’re getting no more coverage than any other band with the odd 6 music session under their belts. We’re in a room that’s nearly full for another London show and there are some people here that we’re told have travelled a long way just to be here.

Thankfully the only conclusion we come to every time we cross paths with this band is the one we sometimes forget is actually possible.Plastic Mermaids music manages to grab ones attention in the same way that Mercury Rev’s Deserter’s Songs album did after one listen and Grandaddy’s Software Slump album did after half a dozen listens.

It may be as simple as that?

This seven piece band, who are all based on the Isle of Wight, have recently released their third EP called ‘Everything is yellow and yellow is my least favourite colour’ and it’s their best yet.

We first crossed paths with this band during one of our favourite weekends of the year (Cardiff, Sŵn festival) in October 2015. They spoilt us with a collection of tunes during the short set that some of us have still not tired of since. There was a bit of clattering percussion, there was far too much equipment on the stage, they’d travelled all the way from that tiny island just off the south coast of England to the South of Wales on a Sunday afternoon and every now and again it was brilliantly joyous if not a little bit ridiculous seeing such a huge band performing inside the tiny Moon club (every great band has to have something a little bit ridiculous about them – even Coldplay can be a bit ridiculous but we’re not here to discuss them).

Alaska, one of the tunes of the year in my little world will capture the heart of many in time to come. Painted Lady is a song waiting for the world to embrace. Paris Milkshake will make some people cry one day and some of us will continue to experience these tunes between now and when we get to hopefully see all this one day in that field that we dream about seeing them in one night.

A year after our first meeting the same songs still exist along with a batch of the new ones (we get a trio all back to back this evening) entering the set. Dual vocals from brothers Douglas and Jamie Richards have us scouring the stage at times to work out who is singing. There’s an additional drummer tonight, there’s probably even more gadgets and gizmos tucked away in every nook and cranny that space will allow and there are the lights. There may not be many lights, but once we don our ‘Kaleidoscope glasses’ we’re given before the show begins then the whole experience becomes an even bigger thrill.

Perspex triangular shapes hang from the roof and rise from various parts of the stage. The band are grinning from ear to ear as they begin to realise how slick this is all sounding, and it looks as great from where we’re standing as it sounds.

Plastic Mermaids backing singer Rhain also needs mentioning. What Rhain does is incredible – once you’ve seen this band you’ll recognise what we’re on about. 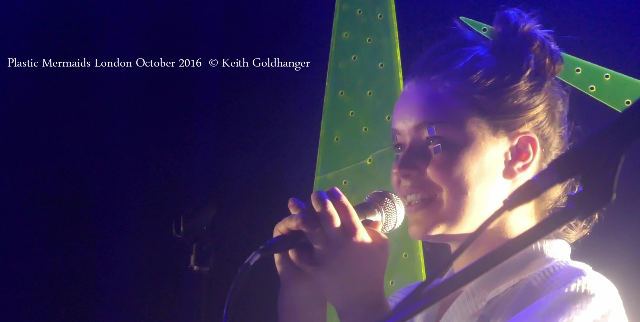 There are two sides to Plastic Mermaids we’ve discovered. The brightly lit psychedelic version and the cardigan wearing version we have seen filmed in daylight accompanied by a modest sized orchestra that hopefully we’ll be able to witness in the flesh one day. Both versions of this band are great.

A year ago we’d have given this a 9 and a half out of ten. It was the thrill of wondering what else they had to give that we were yet to hear and it was the love of what was already out there for us to listen to at home that got us excited.

These are huge soundtracks that’ll have you hugging your mates (or maybe even strangers). We get quiet bits, loud bits, a twinkling piano, the sound of a big orchestra and every now and then we experience the euphoria that Plastic Mermaids are capable producing in front of our eyes.

Throughout tonight’s gig everything all comes together- the lights, the sound and for some of us in a crowd full of people that don’t really know each other, it’s perfection.

We’d mention Supertramp if it didn’t mean having to write a couple of pages describing the big difference between ‘good Supertramp’ and ‘terrible Supertramp’. However for at least one of us in this room it’s having that Mercury Rev feeling all over again.

Hopefully there’ll be many people that will get the same satisfaction from this band as those of us in attendance are getting out of this band currently. We’d imagine it’s a similar feeling the Icelandic’s get when they hear Sigur ros in their own back garden.

Plastic Mermaids are a wonderful band and tonight we got the whole deal.

Ten out of ten.