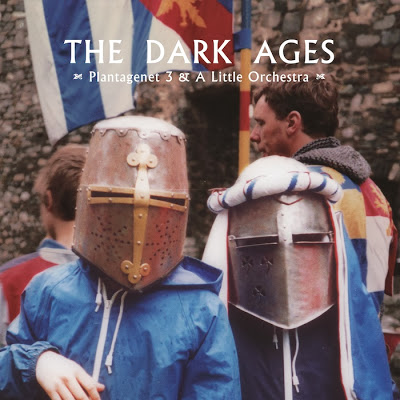 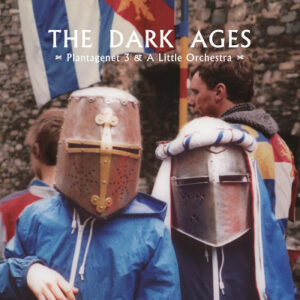 According to the press release Plantagenet 3 are an instrumental guitar duo who describe themselves as “post-surf”, while A Little Orchestra are an experimental pop orchestra formed by Monster Bobby (of The Pipettes). And The Dark Ages is the 2 track 7″ they’ve made together. For Louder Than War Brett Savage reviews.

There is a common trope within science fiction of what are known as alternative realities; where usually some variance in history has created a noticeably different timeline to be played out. Maybe a future where Al Capone became a hippy and started his own Ice Cream company. I dont know – I’ve never written for Star Trek. Plantagenet 3 manage to drag some of these weird variances into our very own consensual reality. Imagine The Ventures playing chamber music to the clatteringly spare drum machine tracks of Young Marble Giants. Next, imagine all this happening in modern times inspired by the age of heraldry. Its pretty unlikely there are many other bands forging a path this ideosyncratic.
Teaming up with A Little Orchestra , an experimental pop ensemble put together by ex-Pippette, Monster Bobby, the Dark Ages cuts a weird loop through time. Although Plantagenet 3 has its tongue firmly in its cheek, maybe these austere times demands austere music. And surf music.

Canute (The Irresistable Surf), whilst possibly renamed to his Anglicised moniker to avoid any unfortunate spelling errors by laxadasical cnuts, essays a plaintive surf blues soundtracking the silly king’s insistence that the tide not take his kingdom. The fiery jangle of Richard Lanyon’s Fender Jaguar rakes over the strict basslines from bassist Tasha V (who also plys her trade in cosmic cavepeople Taman Shud). Could this be a warning from the past to the likes of Nigel Farage, jealously guarding nothing more than an ill conceived ideal?

Godiva & Tom features some slow burn guitar that brings to mind a seriously introspective Hank Marvin, whilst violins slice out severe string arrangements. It makes me think of what kind of effect would seawater have on a suit of armour. Stirring stuff.

An unusual proposition, an inspired pairing and a great EP.


~
You can buy the EP from Norman Records.

All words by Brett Savage. More work by Brett can be found at his Louder Than War author’s archive.