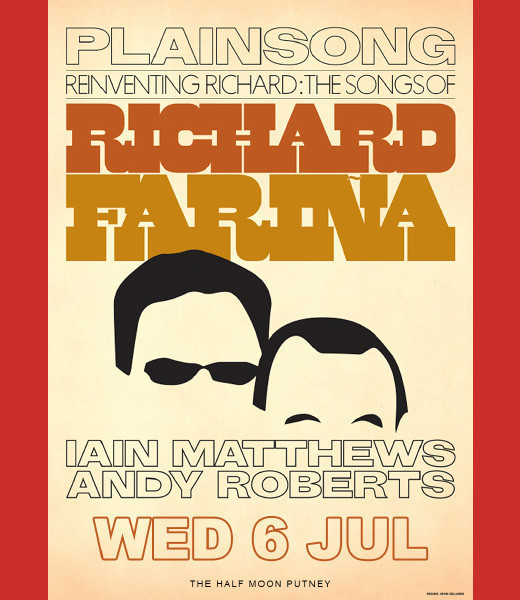 Iain Matthews and Andy Roberts have revived Plainsong to record an homage to sixties folk singer and author Richard Farina. A short UK tour saw them stopping at the legendary Half Moon for one night. Louder Than War’s Craig Chaligne reviews.

Plainsong had been put to rest after a Farewell tour in 2012 that had seen Andy Roberts and Iain Matthews tour the world one last time culminating in a series of gigs in Japan. Fast forward 3 years and Iain was doing a solo tour of the US and travelling with one of his friends. A conversation on tribute albums led them to the idea of recording a tribute to Richard Farina. Enthused by the prospect, Iain called his former bandmate and with a little help from multi instrumentalist Mark Griffiths, a reformed Plainsong recorded a fine collection of rearranged Richard Farina classics.

Concluding a short UK tour with a show at the Half Moon, the trio revisited their back catalogue mixed with Richard Farina classics. Starting with “Reno Nevada” and “House Un-American Blues Activity Dream”, two Farina numbers that are not on the new record, they then chose to follow them by “Raider”, a song penned by Jerry Yester, best known for his stint in the Lovin’ Spoonful. “Raider” was originally recorded on Farewell Aldebaran, a duo album that Yester made with his then wife Judy Henske (Plainsong covered the song on their debut LP “In Search of Amelia Earhart”). Plainsong’s original lifespan was pretty brief as they disbanded during the recording of their second LP but Roberts and Matthews reunited to make music together in the nineties and with the help of various musicians recorded two albums in Austin, Texas (“the name of my first car” Andy joked during the gig). Continuing their tradition of mixing original material with obscure covers , these latter day recordings showed that the partnership between Roberts and Matthews still had the necessary creative spark. An excellent anti-corporate song by Nashville based singer songwriter Mark Gemino entitled “The Rat and the Snake” originally aired on 1994’s Voices Electric and the original “Stranded” from 1999’s New Place Now proving that point.

The Farina selection mixed some of his most well known songs such as “One Way Ticket”, “Hard Loving Loser” and “Pack Up Your Pieces” with more obscure fare such as “Lemonade Lady” which was released in demo form after the singer’s death. They didn’t forget their first album playing “Yo Yo Man”, an obscure track from a Mason Williams record that apparently was the only good tune on the record. The Matthews original “Call The Tune” with its almost gospel like quality was one of the many highlights of the evening. The main body of the show closed with “Amelia Earhart’s Last Flight” and “True Story of Amelia Earhart”.  A two song encore raised the bar even higher with a spine-tingling A capella version of Richard Thompson’s “Galway To Graceland”.