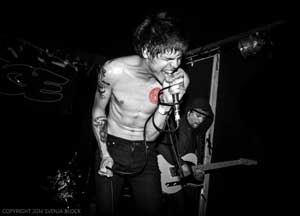 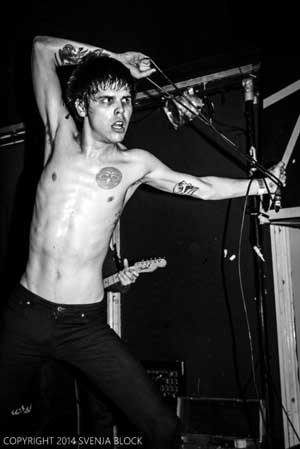 When someone says the words “Californian punk rock” a few bands come to mind, such as Green Day, AFI, Blink 182 or perhaps even the slightly more underground, Operation Ivy. Although, to the true blue punk rockers, those bands may seem a tad closer to punk pop than to punk rock, especially when compared to the British and East Coast American punk artists of the 70s. But in modern times, the aforementioned bands are undoubtedly at the forefront of the golden state’s punk scene, giving people around the world a general idea of what Californian punk rock is. However, when it comes to Plague Vendor, let’s just say you can forget every idea you ever had about Californian punk rock.

Another busy evening in the Shoreditch area, crowding the corner outside The Old Blue Last, some bankers and office workers had made their way from the hustle and bustle of the city to grab a few quiet pints. Drinking ale and chatting about the economy – this was hardly the scene I was expecting, since I was meant to be reviewing a gig for a Californian punk band called Plague Vendor. A grungy basement venue, with graffiti on the walls and kids with ripped jeans queuing outside along with the faint smell of weed in the air would have made more sense. Did I come on the wrong night? Was the gig cancelled? Many questions entered my mind as I tried to figure out what was going on.

Eventually, I walked into a room that greatly contrasted the rest of the building and its clientele. At the back of the pub, through a door, up two flights of stairs, down a short and narrow hallway and through yet another door hid the tiny venue in question. If only the men in suits downstairs knew what was happening above their heads, it was like The Old Blue Last’s dirty little secret.

A couple of girls were dancing around to the first band, there was a merchandise stand set out in the corner to buy Plague Vendor’s latest vinyl LP Free to Eat [which came with a free CD copy of the album] and then the room started getting smaller as more people piled in. A short while after the first band had finished their set, the lights suddenly switched to blood red and Plague Vendor stepped onstage.

An eerie silence lingered for about a minute before they began. In that one minute, it became all too obvious, that these guys were not about to do anything predictable. All four of them looked calm, focused and ready to blow some minds. With a quick count in from the drummer the band blasted into the first song.

The tune that ended up getting stuck in my head for the rest of the week was the bands self-titled song Plague Vendor which has a dark cheerleading style chorus, spelling out the letters of the bands name in an aggressive yell as opposed to a merry cheer… definitely no pom-poms involved. Another infectious number, Black Sap Scriptures features a catchy guitar riff that lies somewhere between the realms of a Dead Kennedys song and a Tarantino soundtrack.

If a genetic experiment, where mixing the DNA of Sid Vicious and Iggy Pop could take place, it would probably result in the creation of lead singer Brandon. That’s really the only way to describe Plague Vendor’s front man. He moved around the stage in a weird and wonderful way, doing tricks with the microphone and swinging from a rail above the stage. At one point he even did a handstand on the bass drum, which is quite a feat, taking into account that Brandon is well over six feet tall. He announced, half way through the set that the sweaty t-shirt he was wearing would be available to buy after the show. He then took it off, stuffed it down the front of his jeans, pulled it out and threw it into the face of a disgruntled young man before resuming the performance.

Got It Bad is a song about looking across the bar and seeing someone you fancy. A sweet concept for a song you might think? Wrong. With dark and insidious sexual undertones, the track gave the singer a chance to thrust his hips and start shaking on the floor amidst the thought provoking lyrics. With that being the last song of their set, they thanked the audience and then took off in the blink of an eye. It was like we had all drifted off into a surreal daydream and imagined the entire show.

I had been so mesmerized by the performance, that I hadn’t taken much notice of the people around me. Nearly every jaw in the room had dropped. Like me, they hadn’t been expecting the likes of Plague Vendor. So, if you ever hear about them playing in a town near you, you would be a fool to pass-up the opportunity to witness this band in action. Even though you’ve been given a bit of an insight into what to expect, you should still expect the unexpected.

All words by Acey Eliza and all photos by Svenja Block. You can read more from Acey at her author’s archive here and see more of Svenja’s photos at her Flickr or on Facebook.

April 6, 2014
We use cookies to ensure that we give you the best experience on our website. If you continue to use this site we will assume that you are happy with it.Ok